Another lock free run today and a later start at 9am.  It must have been a good session at the pub last night as we were the only boat to move at that time of the morning.

The run today was not very interesting for the helmsman and the grey cloudy day did not make for interesting scenery.  This stretch is mostly either high embankment with rolling farmland views or high banked tree lined woody sections.  If ever an autopilot could be fitted to a narrowboat then this part of the Shroppie could put it to use.

Not that we do not like the Shroppie, it is still a lovely canal and we still enjoyed todays cruise none the less, we just wish the promised good weather would get a hurry on and arrive!

Despite the straightness of the canal bridges a add interest as many seem overly ornate for their location.  I quite like the Shroppie bridges along here


The rural scene of the canal is punctuated with the occasional wharf like this one at High Onn.  Lord Talbot's wharf which hints of some agricultural traffic as well as industrial traffic on the canal.

One highlight occurs just before the village of Gnosall (pronounced no-zull).  Cowley tunnel may only be 81 yards long but to consider the Navvies had to cut this through solid sandstone with just pick axes and shovels is an achievement in itself.


Shortly after passing through the tunnel one arrives at the pretty village of gnosall itself.  The main village is a walk from the canal but Gnosall Heath is what boaters see from the canalside.


Leaving Gnosall we came across a fishing competition.  Judging from the anglers equipment this was a pretty  serious competition.  Unfortunately the hunched fishers went on for over a mile so tick over was required.


The row of fishermen went all the way to Norbury Junction!  At the Junction things were pretty busy here too.  Boat were coming and going from the wharf.  One came through the bridge hole straight at us.  I sounded the horn as the crew were too busy waving at bystanders on the wharf and not watching where they were going.  Worse, it turned out it was a boat for steering courses.  Clearly the instructor who was too busy waving was not doing a very good job and after sounding my horn he looked back, only just managed to miss us as he passed.

In addition the pub opposite was hosting a classic car rally.  Not sure if they were Enfields or Morgans but they looked great either way.

Those of you that have eery cruised into Chester will be familiar with the long tuerm moorings at Golden Nook near Waverton, a mile long line of moorings.  Well Norbury makes these look like a layby.  Long term moorings now stretch from a mile before the junction to well after it.  The line of moored boats never seemed to end.


We followed a hire boat on tick over through the cutting and passed this paddler waiting for us to pass him though at our speed he would have been better paddling ahead.  The hire boat was clearly having trouble steering at any speed above tick over so we politely asked if we could overtake and left them to cruise at their sedate pace with boats starting to queue up behind.


The quaint little Anchor Inn near High Offley looked quite busy.  This was good to see as last year C&RT wrongly published it had closed.  Social media to the rescue with a call going out to let people know this was not the case and it would appear the pub is now far from closed.


In the Long Shebdon Embankment is a Premier foods factory in front of which, on the canal, is a wharf formerly used to transport chocolate from the then Cadbury's factory which served as a centre for processing milk


Further along the canal surface took on an opaqueness about it.  The reason was in a field nearby.  This large combine harvester was cutting the field.  The dust generated was settling on the surface of the canal.

As it was getting no on for 3:30pm we needed to decide, stop at Goldstone Wharf or chance a mooring at the top of the Tyrley Locks.  On arrival at Goldstone we found a nice mooring near the Wharf Inn and surprisingly no infamous Shroppie shelf to hinder us either!  Tonight we'll treat ourselves to a meal in the pub as it was highly recommended by the nice couple on a very shiny nb Bullrush moored behind us. 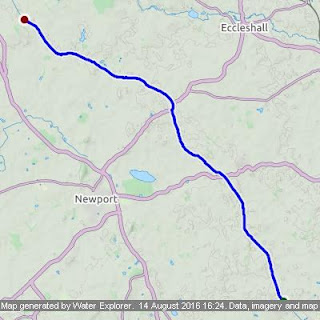