We had a lovely peaceful night last night that was until we were woken again at 5:30am by a passing boat and the clinking of the nearby lock paddle. I never understand why people insist on travelling at that unearthly time of the morning.  It is most inconsiderate towards others no matter what the excuse.  Why bother stop at all and just cruise 24/7?  (god forbid that becomes the norm!).

First off was the last of the stone locks no.93  Opposite, across the road, is this monument to the town in bloom made from a stern of a butty. 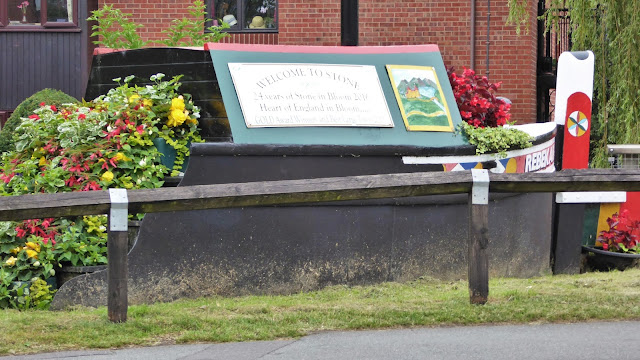 The lock is alongside the Star Pub.  We had a lovely meal in there last night and good value for money it was too.


Leaving Stone the canal passes into rural countryside again.  Nothing of note along the way.  At Aston Lock a 30 minute run from Stone we joined the now usual queue for the locks with two boats ahead of us.  At this lock nothing was coming up so each crew had to turn the lock in their favour.

Shortly after the lock Aston Marina hoved into view.  This is the marina made famous by the Monday afternoon club in the winter months, attended by Paul and Elaine (Manley ferry) and several other bloggers (Click)


Along the route near Weston-on-Trent several rather posh houses can be seen, this one clearly having a full renovation in progress.


Again we queued at Weston Lock.  This time we were stopped by boater queuing as three boats had been thoughtfully moored within two boat lengths of the short lock landing making the queue stop a long way back from the lock.  Copious use of hand signals woredk well to usher boats up and around them.

After Weston Lock one is cruising seemingly in the middle of nowhere with just farm land around you.  Its a good way to the next lock, Hoo Mill Lock, just after some interesting long term moorings.

At this mooring these rather large cuddly animals stood guard over the jetty, the white bear reminds me of the one in the Birdseye adverts.


At this one they are clearly fed up with speeders going past the mooring.  The speed camera sign was obvious but no sign of the camera.


This one comes complete with its own Jacuzzi

Chris spotted this delightful Gipsy caravan tucked away at this mooring, and in lovely condition too.

While someone obviously has artistic talent with a wonderful dragon painted on the cabin.

Once more we joined the queue at Hoo Mill lock but only one boat ahead of us by now.  They descended and the crew of a boat coming up recognised us and told Chris she reads our blog.  We did not get their names but the boat was called nb Leo.    Sorry we did not get your names but it as nice meeting you if only briefly.

After the lock is our sister marina to Tattenhall marina, Great Haywood Marina.  We did not need fuel or pump out so pressed on to the junction.


All along the banks by the marina up to the junction are now moorings for at least half a mile.  I spotted this work boat called Thor, it must be the smallest work boat I've ever seen so far, all of 10 feet long.

As we approached the junction I slowed right down to make the turn with Chris up front as look out.  I'd barely put the tiller over and a boat shot out of the junction at such speed Chris dd not have chance to warn me.  He careered across the junction barely managing to stop without hitting the bank opposite and its quite wide here.  After that we made the turn without hitch.

Our destination was Tixall wide but, as we noticed it is now getting significantly more busy with boats so did not hold much hope of finding a mooring.  Plan b was to retrace our steps to the marina as its free for us being moorers at Tattenhall.  We really wanted to stop at Tixall as it was tipping with rain last time we passed by.

Sure enough when we got there many boats were moored up.  At the wide several boats were moored with big gaps between.  We asked one boat with 40 foot behind, politely, if he would be good enough to move forward to make room and he begrudgingly offered as, "I'd ruined his fishing away", if we could not get into the gap ahead of him.  Behind was a 40foot gap with two fishermen who were adamant they would not allow us to moor there when Chris asked if we could take the space as we passed.  Luck was with us though and we just manage to squeeze (literally) into a gap head of the aforementioned boat.  The Armco was not good here but with plenty of fenders it was OK.  Had we not have fitted I would have had no choice but to upset the fishermen and bring AmyJo onto the mooring where they were fishing.

I may be speaking out of line here but to me the moorings are just that, moorings for boats.  If you want to fish unhindered go fish on a lake not a canal and please, definitely do not fish on busy moorings and not expect a boat to want to moor where you fish.  Finding a mooring for a 67ft boat is bad enough now its peak season but fish on a much needed mooring is a no go as far as I'm concerned, sorry if that upsets anyone but..... rant over. 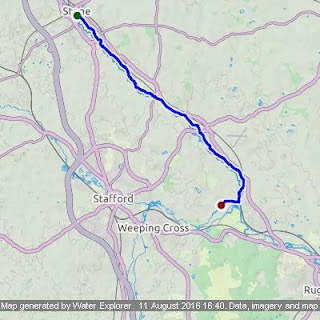