Having recovered from the hectic weekend we rose and prepared AmyJo for Cruising again.  Whilst Chris got things sorted below I did my engine checks and got everything ready to Cruise and topped up with water.

We slipped the mooring and pulled alongside the fueling jetty for a pump out and diesel top up.  After thanking the marina staff we got underway.  We may only have been away for a few days but it felt like an age.  We were so happy to be on the cut again.

By Teapot Hall the locals were out watching us leave though who she was we do not know.


A little further on we came across a boat with a rather novel stern canopy.  The boat was obviously being worked on and the tent was placed over the stern presumably to enable the owner to work on the engine and stay dry.


Rain was in the air and by the time we reached Hall Green stop lock a fine drizzle had set in. I dropped Chris off and she opened the lock.   When the gates opened I let AmyJo drift out and helped Chris close the gate.  A long narrows after the lock mean we could simply walk back to her and step on.


Having carefully passed all the moored boats We made our turn to the right at Hardings Wood Junction.  Chris was checking the way was clear and not a moving boat was seen in either direction.

We had intended to moor up by Harecastle tunnel and do a shop at the nearby Tescos but no sooner had we moored we were told we could proceed.  The tunnel keeper was really good and asked us to show our tunnel light and sound the horn.  He then asked me to stop in the tunnel entrance and explained what was required of us.  He also checked our top box fitted under the new height board for clearance.  It went under with inches to spare.  Once the emergency horn sounding procedure was explained of a long blast every 30 seconds until answered with 3 short replies we were allowed to proceed.

Despite the worry about head room Chris and I had been much looking forward to going through.  Interestingly the doors were not closed behind us and fans started.  We assumed it was because there was only us and a boat in front some way off.  We later found out why.


At first the tunnel is like any other.  Dark, wet but nothing to concern one.  We made steady progress with Chris relaying what was going on upfront by radio.


It not until you are halfway through that the ceiling starts to descend.  Fortunately this is in steps each with white painted ceiling edges show where the roof drops


At one point I was getting a bit concerned as I had to crouch down low to avoid hitting the roof.  The top box at this moment had just 3 inches of space above it.  I found keeping slightly to the left we were in the highest part of the roof so nothing came amiss. Phew!

At the 1100meter mark the roof begins to rise again and eventually the light from the South Portal could be seen.  400m from the end the doors suddenly slammed shut in front of us and the fans came on.  All of a sudden a thick fog enveloped us.as the fans purged the fumes through the tunnel.  So that was why the doors remained open when we entered.  Then within minutes the fug cleared, the fans turned off and the doors re opened much to our relief.

For the benefit of our non boaty reader and according to Wikipedia Harecastle Tunnel is on the Trent and Mersey Canal at Kidsgrove in Staffordshire. It is made up of two separate and parallel tunnels described as Brindley (2,880 yards or 2,633 metres) and the later Telford (2,926 yards or 2,675 metres) after the engineers that constructed them. Today only the Telford tunnel is navigable. The tunnel is only wide enough to carry traffic in one direction at a time and boats are sent through in groups, alternating northbound and southbound. Ventilation is handled by a large fan at the south portal.

According to legend a young woman was decapitated in the Telford Tunnel in the 1800s and her body thrown into Gilbert's Hole, a coal landing stage within the tunnel. The man had hacked the woman's head from her shoulders with a piece of slate until it was removed.

It is believed that she now haunts Harecastle Tunnel, either in the form of a headless woman, or a white horse, and her appearance used to forewarn of disaster in the local mines. Some boatmen took long detours to avoid the tunnel, and today the tunnel keepers relate tales of occasional mismatches in the number of boats going in and coming out. Such tales are, however, fanciful, as any such discrepancy would result in a major search operation.

In fact there is no record of any such murder, and the story seems to have been inspired by the murder of Christina Collins in similar circumstances near Rugeley. The association with another canal ghost 'Kit Crewbucket', who haunts the Crick Tunnel, would also seem to be spurious. Locally the Kidsgrove boggart is known as the Kickrew Buggart because of the local dialect in which Kidsgrove is called kickroo or Kickrew as the dialect is not written down the spelling is optional.

I'm glad to say we did not see the Boggart on our trip this time.

We then came to Westport Lake which looked quite nice so we decided as the rain was still in we would stop for the day.  You guessed it, once more, within 30 minutes the rain stopped.

One word of warning when passing through Harecastle tunnel if I may.  Do wipe down your boat roof afterwards as soon as you can.  AmyJo was covered with Yellow droplets of water.  Seems where the water is dripping from the tunnel roof it now contains the very iron ore that tinges the water Orange.  If not cleaned off straight away it will stain the boat roof.

After wiping down AmyJo Chris and I had a wander over to the visitors centre for a spot of lunch and a cuppa, then we had a stroll around the lake.  It is an amazing place for wildlife with birds galore to watch.

The visitor's centre has quite a distinctive look about it with a large balcony looking out at the lake that gives it the appearance of being stood on stilts.  Its actually built on a slope and its only the balcony that is on stilts.  Its also very eco friendly with solar panels for power, straw bales for insulation and a planted roof for added insulation.


After walking the lake we then walked to the local Aldi just up the road for some essentials before settling down for the night.  One has to walk through a small industrial site across from the canal until you reach the main road.  Aldi is off to the left in a few 100 yards. 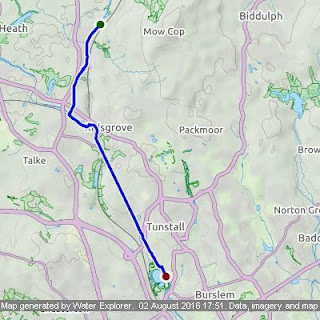 Ooh - I didn't know there was an Aldi there. Very useful to know.