The rare appearance of the sun shining into the bedroom woke us up at 7:45am so we got up and after breakfast we got underway.  We were quite looking forward to today as we would be turning onto the Caldon Canal for the first time.  We had been told it was nice so had expectations.

On the way we passed the Middleport Pottery now a tourist attraction with moorings outside for boats to stop.  We decided we would visit this another time. 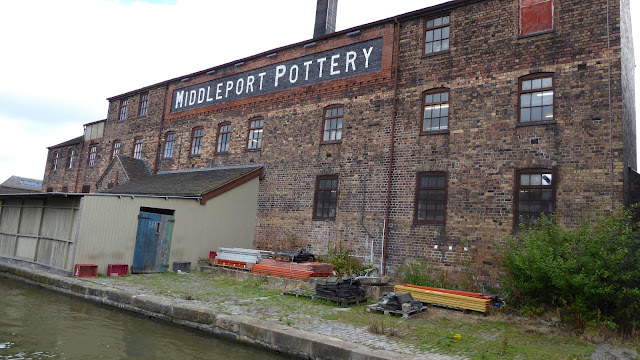 We stopped at bridge 118 shortly after getting under way as we desperately needed a shop having run down stocks for the weekend away.  With the help of Google maps we soon found a Sainsbury's 15 minutes walk away.  With full bags once again  a taxi ride back to the mooring was called for.

Whilst Chris prepared lunch I got underway again but before we could blink Etruria Junction came into view.  The volockies started to prepare the locks but I indicated we were turning onto the Caldon and received a thumbs up in return.  Chris had to abandon preparations of lunch as we would soon be at the first locks, a staircase.

On the opposite bank of the Caldon to the museum is a statue of James Brindley.  The statue stands on a tall square-sectioned plinth, facing the canal he was responsible for building. He is shown in contemporary eighteenth-century dress with his right hand resting on a theodolite, an instrument he would have used when carrying out his work of surveying land for the canals. His left arm is bent at the elbow and tucked behind his back. Compared to James Butler's statue of James Brindley by the canal in Coventry, this figure is shown in a very wooden stance. 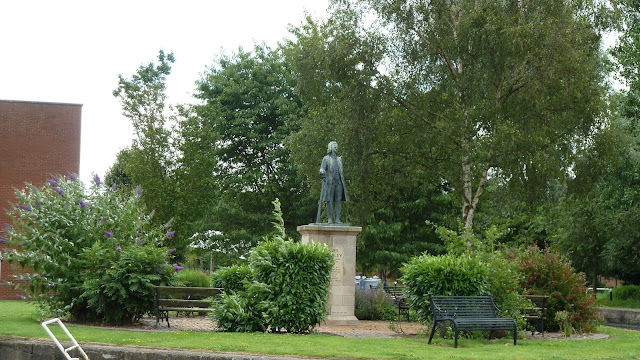 A little research revealed the Inscriptions read :
(on front of plinth)

(around the base of the plinth, from front) 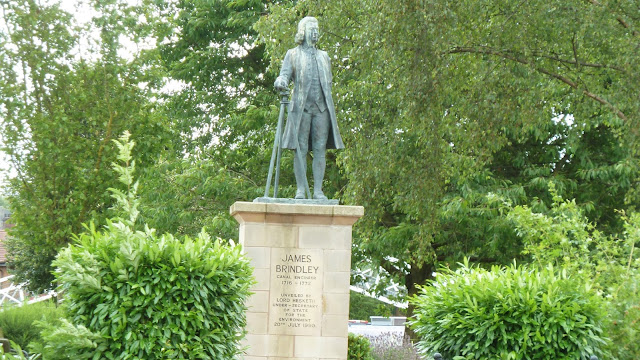 Shortly after turning onto the Caldon an ornate bridge straddles a tight turn.  I had to half wind AmyJo to get her round the corner.  Fortunately the canal is wide at this point to enable boats to make the turn.  After that we reached the Bedford Street staircase Locks.


Bedford Street Locks consist of a two chamber staircase.  Unique on the system is the fact that the upper chamber is much longer than the bottom one.  So that the bottom chamber does not over fill a by wash is built into its wall to drain away the excess water from the top chamber.


The first few miles are a mixture of industry and housing.  Graffiti adorns everything, if you can reach it it's got graffiti on it.  Some of the bridges are quite ugly and not in keeping with those we have seen in the past.  These seem more modern and functional rather than interesting.

The next lock is Planet lock, located in a now predominantly office block based estate.  When we arrived a private boat was on the lock landing, the crew enjoying a cuppa and made no attempt to move off.  I had no choice but to nose AmyJo up to the lock gates with a very gentle thud.  The cheery fellow on the other boat quipped " Another paint job by the sound of it" with a cheesy grin that quickly disappeared with the lash of my tongue.  We were not amused.

Hanley park comes into view shortly after the lock and is a welcome break from industry to park land.  Sadly now its pavilion is looking sorry for itself being boarded up, barriered off and like everything else, plastered with graffiti.  To be fair the park itself is quite pretty and well maintained, worthy of a stop for lunch, though we were advised not to moor here over night because of the wino's.

We did get a rather pleasant surprise here though as we passed a moored hire boat.  It turned out to be Olivia Ginger, a Canal Company hire boat of note for us.  We had hired her back in 2002 for our first ever trip up the Llangollen canal with the in laws.  A trip with fond memories in her.   We were so pleased to see she was still around and still looks in good condition too!  The young lass on board seemed really pleased when we told her we had hired the boat and eagerly told her family so.

As we continued on we came to the first of the low bridges by the Bridgewater Potteries, these are noted in Pearsons as low headroom, no headroom more like!  By now the Graffiti was getting more up market and looked quite good in fact. 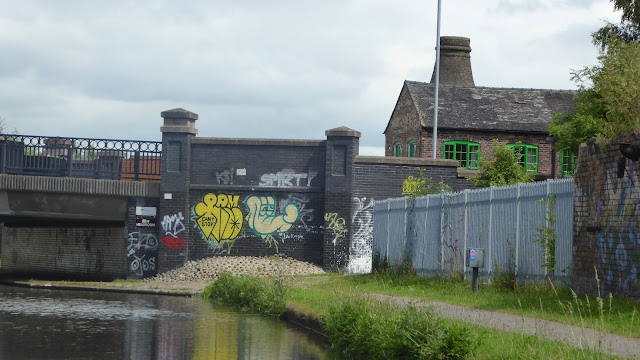 We came to bridge 8A and slowed down to a snails pace.  We watched carefully as first the horns went under with a few inches to spare, but would the top box?  I gently coasted AmyJo ready to slam her into reverse if needed as the top box approach the underside of the bridge.  With a sigh of relief it passed under with a mere 3 inches to spare

At bridge 9 we thought we would not get through as it looked even lower than the first!  With no winding hole available we thought if it won't go we'll have to stop and remove the top box.  I inched AmyJo ever closer ever so slowly.  Again the horns on the front passed under just, now for the top box.  With breath held we crept forward inch by inch and, with just 1 inch to spare the top box passed under.  You can see how close it was from the photo below.  Lets hope the levels have not risen when we return.


By now we were leaving the confines of the city behind and the canal was beginning to look a look prettier.  Old pottery and industrial areas are now giving way to new housing projects with apartments being built all around.  As we moved further into the countryside the graffiti was reducing also.


From now on the canal narrows considerably and is really bendy.  We passed under some bridges on bends and the engine pitch changed with the tell tale tiller shake warning we had picked up a prop Jockey.  This occurred several times but a bit of neutral followed by a burst of reverse usually shrugged it of.  For an urban canal there is an awful lot of detritus in the canal. Considering how pretty it was becoming it is a real shame.

Just before Milton is a particularly tight turn with a pub on the bend and narrows immediately after.  Onlookers appeared at the pub garden as we approached to make the turn.  Clearly this was a form of entertainment for them as I imagine the difficulties a less proficient boater could get into here.  No pressure then. Taking it slowly AmyJo neatly rounded the bend and lined up perfectly to pass through the narrows.  An almost audible moan of disappointment could be heard from the spectators in the pub who then disappeared back inside.


We knew there were moorings nearby and at bridge 18 we found them partially occupied.  The only decent mooring slot was on a slight bend.  Chris scouted ahead and reported this to be the best spot so we stopped there.  20 minutes later the cut was as busy as the M25 and 6 boats came past some mooring up all around all within an hour.  This left the cut very narrow but needs must as these are the only available moorings for a way in either direction.  The addition of building wind made it imperative to get moored up so we doubted there would be much further traffic anyway.

As a precaution I visited the weed hatch for the first time in ages as the tiller was still vibrating badly despite several attempts at neutral and reversing.  Sure enough we had a jockey, here was my prize that could not be shaken off.  Not too bad considering.

For our non boaters here is a quick glossary of terms I've been using so far.

Urban Jellyfish - Any form of plastic bag, polly wrap or plastic sheeting.  These usually float on or just under the surface and are sucked onto the prop.  Many like to lay in wait at bends or winding holes.

Prop Jockey - Anything hitching a ride around the propeller causing speed to drop, tiller shake, banging sounds, drop in engine revs or worse, stalling the engine.

Poo Bunny -  A doggy poo bag tied up with the handles sticking out like rabbit ears.  Usually found hanging in trees or on alongside the towpath (if you are lucky.... or under foot if not).

Metal fishing net - submerged shopping trolley.  Usually frequents bridge 'oles or a distance of a mile or so from nearby supermarkets.

Logadile - any sizable piece of floating wood that cruises the canal. 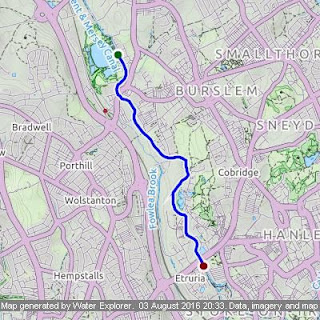 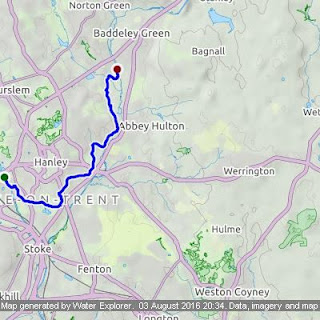