The wind blew a hooly all night last night and was still quite strong in the morning on the wide.  It was a glorious morning with blue sky and sun shining.  The wind pegged the temperatures down at first but they soon recovered as the day wore on.

Tixall hall gate house is a grand affair and looked resplendent in the sun.  Tixall Hall is now long gone but it is thought the wide was created to appease the owner of the hall, however, another theory is the wide was actually already there and was assimilated into the canal when the Staffordshire and Worcester canal was built .

The Hall itself was demolished in 1927, leaving only the Gatehouse standing, and the estate was broken up when sold off piecemeal in 1960. In 1968 the Landmark Trust bought the Gatehouse which, following restoration, is now available for holiday lets.

Leaving Tixall behind one cruises the canal for some time before coming to Tixall Lock.  On this stretch locks are far apart giving crews plenty of rest in between.

Passing through pretty Milford we came across one garden with this lovingly restored old wharf crane set in the garden.


Another posh garden that seemed to go on for ever.

After Milton we are plunged back into the countryside but this time the railway is never more than a few yards away.  This train thundered by with so many carriages it seemed to go on forever.

After skirting around the villages of Baswich and Wildwood the railway leaves us alone but now the distant roar of the M6 was becoming heard.  We passed the very well maintained Stafford boat club.  The marina is spotless in every way.  More like a posh yacht club than a marina, the clubhouse is a grand affair and, even the dry dock has double glazed UPVC windows and doors!


We arrived at Detmore lock as a boat was exiting so we were through it in no time.  Just before Acton Trussell this church was just peeping over the sweetcorn growing in the field.

One by one, Shut Hill, and Park gate locks were worked through   We were tempted to stop at Park gate Lock and wander round Midland chandlers there but decided to press on.

By now the roar of the M6 was close and sure enough we passed right under it.  The bridge here is modern and at an angle to the canal though from below it looks "V" shaped.


On through Longford lock one arrives at Penkridge.  There are good moorings here but it was too soon to stop for us.

Between Penkridge and Filance lock is a 70 foot winding hole.  No point winding here as it was full of moored boats.  Unless you are a short boat winding is really tight.

2pm and the temperatures were really getting hot.  I resorted to just a Gilet for a top it was so warm.  Chris was in Shorts and my boatman's hat had to be replaced for a flat cap as the wind kept threatening to remove it.    As it was, Chris lost her hat overboard but we managed to reverse and retrieve it. 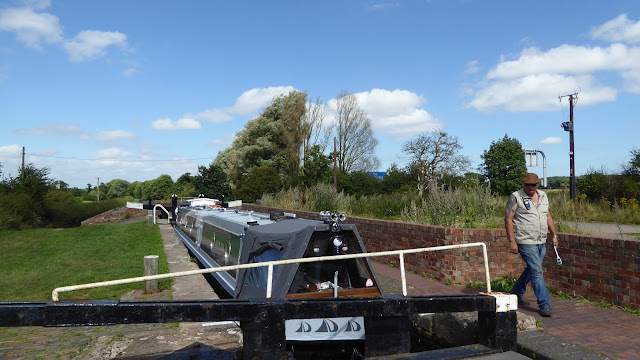 On past Otherton Marina we went and up Otherton lock.  Two more locks, Boggs Lock and Brick Kiln locks saw us at the bottom of Gailey lock.  It looked so nice and sunny here we pulled into the moorings for the day.  It had been a long run today and sadly we now must make haste back to Tattenhall as word back home in Essex is not good.  I'm afraid a visit down there is now needed as soon as we can get back to our mooring.


It was such a pleasant evening we got the chairs out and sat on the tow path having a much needed drink or three.  Cheers. 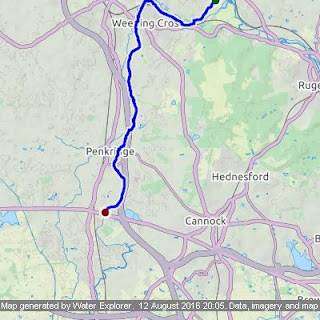 Hello Both,
Great hat Chris, I have the same on, however mine struggles to fit over my head of hair! My hair in my eyes is a constant pain in the neck, a swimming hat works fairly well,
Lisa