A slightly earlier start today at 9am.  A cold cloudy morning once more threatening rain that never came.

Shortly after getting underway we crossed Dane aqueduct but could barely see it for the foliage now growing almost as tall as the ramparts.  Pearsons states this as an imposing aqueduct but not from the canal.


Today's section of the canal is quite heavily tree lined with some branches being uncomfortably low in places.  In fact in some instances one has to steer around some to avoid the roof being cleared or worse the cabin sides receiving nasty scratches from the broken ends of the low branches.   That said it is a beautiful peaceful stretch of canal and in the sun would be wondrous with sunlight filtering through, though not today unfortunately.

This is the stretch with lots of bridges, in fact we passed under 26 in just 4 miles each one with narrows under to carefully proceed through and not pick up a prop jockey or two.  We've had one or two today but going into neutral then a short burst astern usually shook what ever was round the prop free.

After running down a long straight stretch passed Buglawton one comes to the  remains of  Vaudrey's wharf, looking now more like a winding hole.  Its a shame money cannot be found to fix it as it would make lovely visitor moorings.


Charles Vaudrey built the wharf in 1835 to serve his mills at nearby Bath Vale. The railway was opened in 1860 as the Biddulph Valley Line of the North Staffordshire Railway (NSR) and passed under the canal close by. It then provided a transport interchange between the railway and canal.

CBC bought the railway some time after its closure to convert into the Biddulph Valley Way and with it came Vaudrey's Wharf and the land it stands in. However, it should be noted that the land required to provide access from a public highway to Vaudrey’s Wharf and the Biddulph Vaudrey’s Wharf  Valley Way was retained by British Rail and is now owned by BRB (Residuary) Ltd.

For very many years there has been a leak somewhere in the wharf which has allowed water from the canal to run down onto the Biddulph Valley Way. CBC have never felt able to fund the repair of this leak, which is now quite severe, and, in the opinion of the then British Waterways (BW), represents both an unacceptable loss of water and a potential risk of breach.

Not long after the visitor moorings after Vaudrey's wharf is a very interesting overspill weir.  For our non boating reader such overspills allow the canal level to be maintained on a stretch of canal between two distant series of  locks.  As water is let down it would continue to fill the canal until it overflows its banks.  Overspills allow excess water to be run off to nearby streams or rivers thus maintaining a steady level of water.

This overspill is odd in as much as it also includes the towpath across it.  Today low levels meant walkers could keep their feet dry but I should imagine it risky when water is pouring down the overspill.

As one comes into Congleton town centre we pass under the two bridges carrying road and rail.  Beware here as, in the photo below, you can see a kink in the cut,  Amyjo only just squeeze through here but not without nudging the bank first. 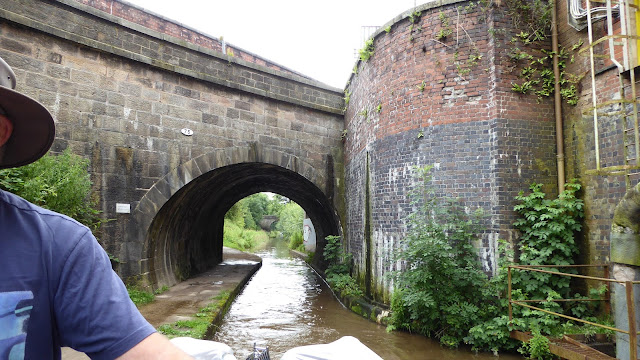 As the visitor moorings here are shaded and noisy because of the road and railway we decided to risk it and see if we could moor at the wharf further on.   At the aqueduct just before the wharf C&RT workmen were working to shore up the embankment.  Their boats and piling barge blocked the way.  One had to sit tight and wait to be waved on though this to cross the aqueduct so be prepared for delays here during the day.


We found a mooring just after the aqueduct at the wharf and tied up.  We needed another shop and after consulting the map on the towpath found a Morrisons was in town.  We shut up boat and took the 15 minute walk into town for a look round.  We had cruised through Congleton without stopping on the way up so we were determined to have a look around and were not disappointed.  There are also bus stops just below the aqueduct so a bus can be taken to and from the town centre which is not far.

Congleton is a lovely town and well worth the visit if only to look at some of the old buildings.  The town centre is clean and worth the walk or bus ride to visit.  A local told me the town had entered to Britain in bloom competition and I reckon it might be in with a good chance.

The Town Hall was built in 1864 and opened in July 1866. The impressive building was designed by Edward William Godwin and is based on his design of Northampton Town Hall. The Victorian Gothic building was built to impress and to reflect Congleton’s status. It has an imposing stone staircase and a court room on the first floor. On the ground floor there was a large hall for a variety of functions.  It embodies Italian and French Gothic design influences and the inside is equally dramatic with large two-storey Main Hall with exposed hammer beams, minstrels gallery and mansard ceilings. The building is grade 2 listed. 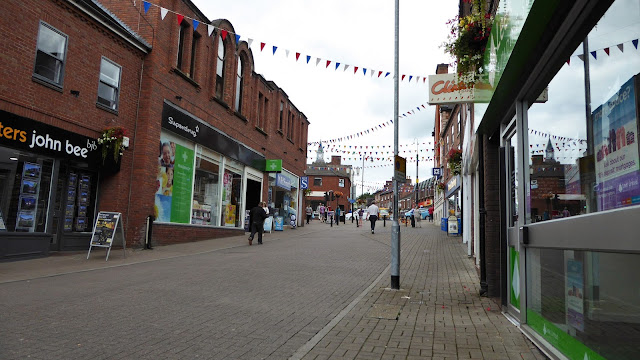 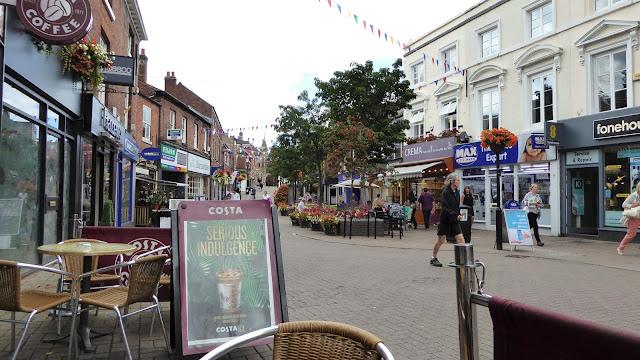 Now I was not aware the Bear Grylls was branching out into the cafe industry but if he did I bet the food would be interesting. 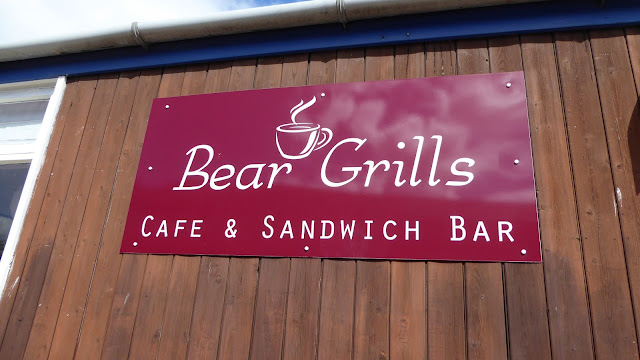 After a look around and a break for a costa coffee with bakewell tart we headed off into Morrisons and did the shopping.  The bus station is right outside the shop but we had just missed the half hourly no. 91 bus back to the canal when we got there.  Rather than hang around for 30 minutes letting the frozen food thaw we took a cab from the rank at the bus station back to the boat. 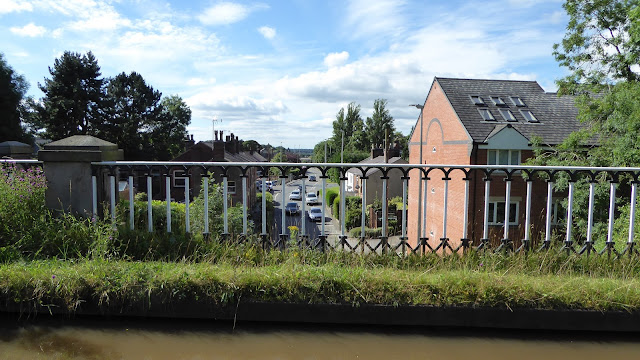 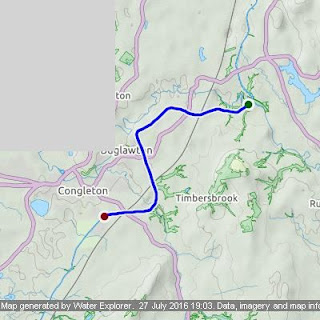 Where are you??? We are moored by Ramsdell Hall and walked to Sherbourne Marina to try and find you. Are you in the Marina? Tomorrow morning we are walking to Mow Cop but could move the boat to opposite the marina when we get back and stop to say hello. Will probably be late morning or early afternoon. Depends how long the walk takes us.

Sorry we mossed you Irene. we're actually in the Marima far side from the cut.
If you looke at rhe polly workshed we'rw two boats back from that.

Lovely building for a W'sp we popped in there when we moored where you were.
ann and keith
nb oakfield