If there was a prize for long distance cruising we certainly would not be in the running today. It was so quiet last night we slept solid until 8:30am.  We knew we would not be traveling far so a leisurely breakfast was had.

The sun was out again and our little spot in the basin was so warm and peaceful we were in no hurry to leave.  We do so love it here but our 48 hours were up so time to go.


We slipped off the mooring and crept passed the boats moored in the middle basin and their crews out in chairs taking in the sunshine.

As we passed the wide Chris spotted this Heron high up on a tree.  He had been up there pretty much all the time we were there except to come down to fish. 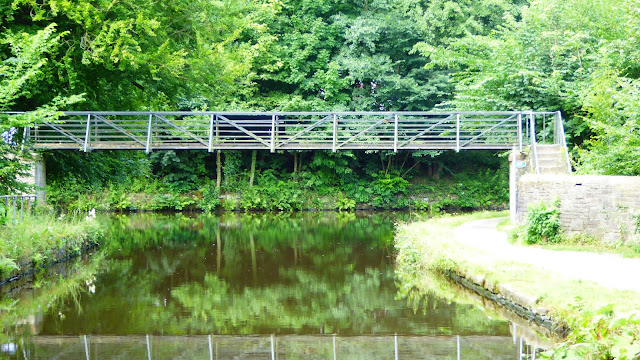 After passing long term moorings we managed to find a spot big enough for AmyJo and right opposite a large Tescos.  A large shop was called for so we filled up with all we needed.  We did not fancy lugging heavy shopping bags up the embankment and Tesco trolleys are supposed to stop beyond a certain perimeter of the shop.  Our luck was in as we crossed the perimeter and our trolley kept going!  In fact it kept going all the way back to AmyJo.  After unloading the shopping I took the trolley back so it did not end up in the cut.

Before leaving Chris had sorted out some clothes that were now too big for her but would fit our Joanne.  She had parcelled them up so walked into town to the post office to post them.  It means Jo will get them quicker and their off the boat freeing up space.

Chris spotted these unusual arches on the back of the Wharf building and wondered why they are so shaped. 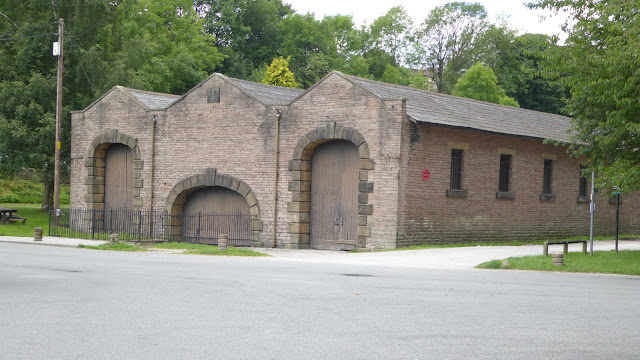 Research revealed this to be the wharf transhipment building.  The canal wharf was constructed in 1797 as part of the Peak Forest Canal and further developed in 1801 with the erection of a three story warehouse which straddled the canal. With the arrival of the Cromford & High Peak Railway railway,the wharf acted as an important modal interchange for the transfer of goods.

The role of the warehouse expanded - in addition to providing a venue for unloading of materials for delivery to Whaley Bridge, it now became a major interchange between the canal and the railway. The wharf area was increased in 1832; extension sidings were constructed to improve access from the railway to the canal and covered by a single storey extension to the existing warehouse which now stretched over five bays and offered both improved headroom and more space for rapid transhipment.
The railway entered the building either side of the canal hence the higher arches.  Boats would enter between and goods transferred to the trains for carriage over the the hill to high and steep for the canal to run through.

After winding at the wharf we cruised back past the Bugsworth arm and back down the Peak forest canal.  Just after swing bridge 30 past Furnace Vale Marina we found a nice mooring and stopped for the day.

In the distance we could see the railway line that runs to the bridge we thought was Marple aqueduct so the noise of the trains would not be a problem or so we thought.  What we had not realised another line ran right alongside the canal where we are moored.  Fortunately this line is only a district line so not many trains are running up this one. 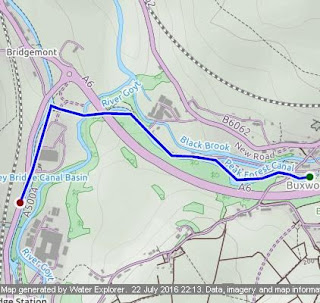 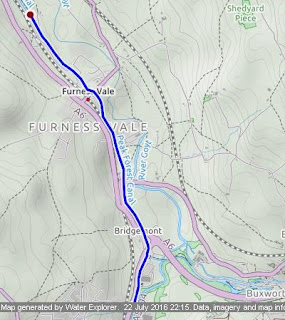