Well what a difference today's weather was compared to yesterday!

Instead of the forecast sun we woke to a grey and somewhat cold morning.  The feel of rain hung in the air but still we decided to cruise.  A later than usual start as being moored directly opposite Sherbourne wharf marina we nipped in to ask about a mooring at the month end so we could go and take part in our favourite sailing race, the Anglesey offshore race.  We want to leave AmyJo for a few days in more secure surroundings.

The run up to Congleton is lock free which made a welcome respite from yesterday's heart break hill but we are still facing more locks later on.

I've never seen so many bridges in one stretch of canal as here they occur every few hundred yards it seemed.  Another issue, as Tom would say, is the top of the canal is very close to the bottom.  This was apparent as at one point the revs suddenly dropped and AmyJo slowed with severe shaking on the helm.   We'd picked up something on the prop from the shallow bottom.  A quick stop to check down the weed hatch revealed nothing.   On resumption of the cruise the helm responded fine and AmyJo made good way.  I can only assume what ever we had picked up fell off when we stopped.

Also a feature along this part of the canal are several crossover bridges.  Not sure why so many but they seemed to occur near relatively new canalside housing.  Odd as the bridges appear a lot older than the housing.

Passing through Congleton Wharf we found  modern apartment blocks. This was originally a Macclesfield Canal Company wharf and contained appropriate buildings to accommodate wharfage and storage. The main building has survived but only just, falling into decline and dereliction over many years. It has been rescued and restored for housing in the early 21stC. This also resulted in the entire wharf yard being covered in housing.  We may stop here on our return and explore the town.

Beyond Congleton the canal returns to the country again but still intersected by bridges though not so many.  At one point bridges 61 and 62 carry the busy A54 and railway over the canal.  A meeting of the most used modes of transport.


There is plenty on this canal to keep the helmsman busy.  Shallow bridge 'oles require a drop in revs or risk picking up a prop jockey.  Then its power back on only to slow to squeeze past oncoming boats in the tree lined narrow sections


Don't let this put you off coming here.  There are nice wide deeper sections and where these occur the crew are rewarded with stunning views that only get better the further along one goes, if the weather plays ball, which for us it did not, beginning to drizzle by now.


As we approach the Bosley locks the drizzle became heavy rain so we managed to find a mooring at the bottom of the locks and hunkered down to let it pass, getting soaked whilst tying up.

After an hour, as if by magic the rain stopped and signs things would improve with the sun making the odd appearance.  As it was only 2pm we decided to press on. We got underway and noticed a considerable difference in temperature.  Within minutes coats and jumpers were off and the air temperature was quite pleasant.

Bosley locks were a delight.  Apart from the odd hard to open paddle all the locks, unusually, had double gates top and bottom.   For our non boaty reader usually locks have one pair of double gates at the bottom and a single at the top or visa versa.  These gates worked so easily being small they virtually opened themselves.

We knew we had a boat ahead of us so resigned to ourselves we would be turning each lock.  Joy of joys for it being handover day for Heritage cruisers back at Sherborne wharf as each time we exited the first 6 locks a hire boat returning home exited the next lock.


One by one we climbed the locks until we got half way up at lock 6 where we ran out of hire boats and no boats coming down.  This now meant turning each lock.  We found using our "Hatton locks method" we could still make good time.  I motored into the lock, Chris closed the gates and opened the top paddles.  When the lock was nearly full and I could safely leave the boat Chris went off to set the next lock whilst I opened the top gate, closing the paddles then motored out and stopped just past the gates.  Shut the gates then motored into the next prepared lock.  We continued like this through the rest of the locks to the top.

One thing about climbing to 518 feet above sea level the scenery just gets better and better.  If only it was a sunnier day!

After two hours we reached lock two, the penultimate lock from the top.  Just after I took this photo the rain came down again.   Nothing for it but coats back on again.

On exit of the top lock the rain once again was getting heavy and nothing for it but look for a mooring for the night.  At 5.30 pm we did not hold much hope of finding one at the public moorings just after the lock landing and sure enough boats galore were moored the length of the moorings and beyond.  Luckily, a bit further on we found a spot just the perfect size between moored boats.  We quickly got settled out of the rain and called it a day.

So no more locks until Marple but, we have Macclesfield, Bollington and Bugsworth to enjoy before them so a couple of lock free days ahead.

Oh yes and sorry for the lack of maps.  Seems there was a problem with them on the Water Explorer website but this seems to have been resolved today. 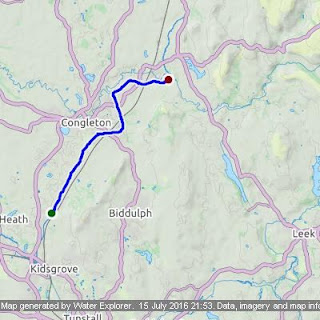 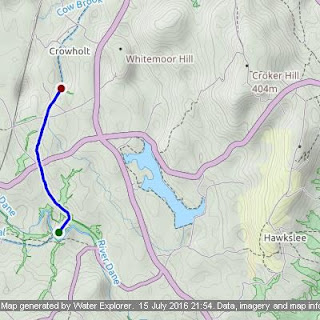 Yes, the Macc's is desperately in need of some dredging and like you, we were going through the bridge holes either on tick-over or in neutral.