Chris had a much better night last night with no return of the heartburn.  We've put this down to having rich food at Vicki's birthday meal after her months of the Slimming World diet.  Seems her stomach is not used to gourmet foods now.

This morning was warm with hazy cloud.  Compared to yesterday's 29 degrees this morning's 20 degrees was welcome relief.  Mind you I'm not knocking the heat, it was so nice to be in light clothes again for a change.  Even my lilly white knees got to see the light of day as shorts were once again pressed into service.  (not a pretty sight though and not one seen often).

We got under way at around 9am and slowly cruised passed the moorings to the junction a short way ahead.  I confess I was not expecting the Macclesfield to be so pretty and Marple junction is no exception.  Here the Macclesfield ends and the Peak forest canal takes over.  Turning to Port (left) takes one down the Marple flight toward Manchester via the Cheshire ring and turning to Starboard (right) as we did, takes you towards our goal, Bugsworth and Whaley Bridge.

From here heavily wooded sections of the canal offer welcome relief from the sun but every now and then the  trees clear to give the boater stunning views of the Peak Forest hills that are never far away.


Its sad that this canal is now in dire need of dredging like the Macclesfield canal and this section even more so.  Progress has to be slow otherwise one finds the boat scraping bottom and throwing up all sorts into the prop.  Passing other boats is an intricate dance as each vies for depth, but, still you both will run aground slightly until once passed the water levels rise again.  No matter though, one really would not want to rush and miss the delights this section offers.


With the canal quite narrow in places it a good thing its not part of the Cheshire ring otherwise it could get very congested indeed.  Instead, being off the track as it were moving boats are few even though there are plenty moored on this stretch. 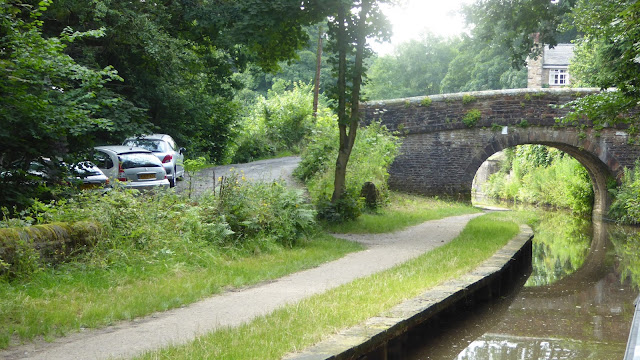 Its a real shame our friend Claire was not still with us as all of a sudden, from behind, a whoosh of wind and flapping heralded the arrival of a Doris duck doppelganger.  Unlike the original Doris this one was much more tame and stayed with us for over an hour. She would fly away from us and then return to sit within inches of us on the folded pram hood, content to be in our company.


Doris II stayed with us to lift bridge 22 then, without bye or leave, she flew off back the way we had come.  One can only assume she has learnt to hitch rides on boats on the off chance of being fed and had gone back to the junction to pick up her next food boat.

We passed Disley before we even knew it as the village briefly kisses the canal with a few gardens backing on to it.  Next comes New town and New Mills both embracing the canal much more firmly with some lovely gardens to show for it.

Round a corner a large mill comes into view.  Rumbling of machinery inside can be heard and a wonderful sweet smell of sherbert wafts through the air. You realise this sweet factory and is in fact the Swizzles factory!  I loved their sweets when I was a kid and can still have the odd fruit drumstick and love hearts now and again.  You can read their fascinating history and see how their products are made on their website here (click)

Not far after the mill is Furnace Vale marina but unless your boat is under 50 feet I doubt you could moor here without blocking the cut as there's not much room.


When Del boy and Rodders became Milwyonairs we reckon they kept the fact they bought a narrowboat a secret from us as we never saw them on one in the series but, they must have as we found it moored nearby.

Chris spotted an aqueduct in the distance and we found this to be Marple Aqueduct which was built to carry the lower level of the Peak Forest Canal across a length of the River Mersey that was renamed the River Goyt in 1896.

The company's engineer, Benjamin Outram, was responsible for the design and Thomas Brown, the resident engineer, for its construction. The construction contract was placed with William Broadhead, Bethel Furness and William Anderson in 1795. Furness having died later in 1795, the aqueduct was completed by the remaining partners in 1799, but not brought into use until 1800. Seven men lost their lives during its construction.

This is the highest canal aqueduct in England and the highest masonry-arch aqueduct in Britain. The difference in water levels in the river and canal is some 90 feet (27.4m) (exceeded only by the Pontcysyllte aqueduct, an iron trough carried on stone columns, where the difference is 126 feet (38.4m)). It contains some 8,000 cubic yards (6,000 m³) of masonry. The three semi-circular arches are about 78 feet (23.8m) above water level, with spans of approximately 60 feet (18.3m) at 72 feet (22m) centres

After turning to port (left) at Bugsworth junction a row of cottages mark the beginnings of Bugsworth basin.  After these the works office building guards the entrances.


The approach to the basin proper at first can seem a little confusing with in fact three options to choose though the middle one is barriered off.  Taking the left hand route brings one into the shorter lower basin whilst the right hand route takes one further along to the middle and upper basins

I fully expected the basin to be full of boats but in fact there is plenty of space to moor.  We decided to explore to the end of the upper basin and moor there if we could.  Upon approach we could see one boat moored at the terminus but it seemed it must have winded and reversed in.
We manage to turn AmyJo's bow into the arch and wind her very slowly as there was only just enough room to turn, ahead a moored boat and behind the remains of a wall now collapsed (You can just see it in the photo at the right hand arch).

Eventually we got AmyJo round and proceeded to reverse her through the bridge 'ole.  The Axiom prop lived up to its reputation as AmyJo responded to the helm beautifully going astern though the bridge.  You can guess my surprise and how stupid I felt when after the bridge was a massive winding hole big enough to wind a battleship!


Still no matter we reversed AmyJo perfectly into the mooring alongside another boat in full view of the owners and drinkers in the Navigation inn just above us.  I was quite chuffed with myself I must admit :-)

We checked into the Navigation inn and looked at the menu whilst sampling the ale.  Decision made we dined there later in the evening, oh and the ale was great too. 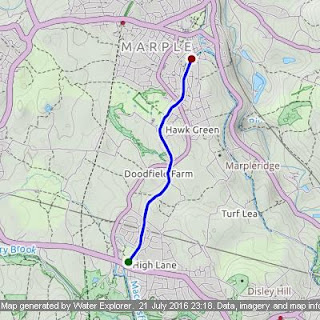 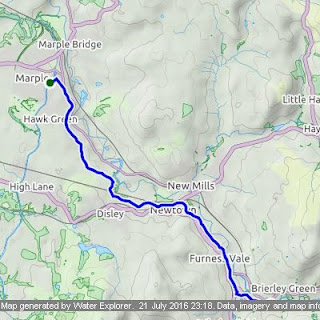 Marple aqueduct is at the bottom of Marple Locks, and you definitely can't see it from where you were. Also, it has a railway viaduct behind. I think what you've seen is another railway viaduct.

As the Marple aquaduct is left at the junction and down the locks,I think that is the railway viaduct near New Mills you saw. Have a walk around New Mills it is stunning.