Having stopped overnight at Bunbury Wharf we backed AmyJo up to the lock and round into the poly tunnel used by Anglo welsh to paint their boats. .  It was quite tight getting her round under the bridge 'ole and into the polytunnel but she got there with inches to spare.

Half way into the tunnel a familiar rattle could be heard, and the tiller shook profusely and then the engine stalled.  We had picked up a prop jockey but we were not prepared for what we found when I went down the weed hatch.  This....

It was the air trunking from an industrial space heater.  Presumably left in the cut from days when the wharf was in use before Anglo Welsh took it over.  It survived the Axiom only by the strong wire spiral that forms its shape.  Unfortunately that same wire wrapped up the axiom completely into a large tangled mass. Two hours later we finally removed the trunking and settled in for the night.

Over the next few days I got on with the task of repainting the gunwales.  I used Fertan rust cure for newly bared steel, following up with undercoat/primer and finally top coat.  The tunnel has a space heater so we could keep nice and warm for painting despite the chilly temperatures outside.

With the work done by Wednesday we moved AmyJo back out onto the main wharf as we were staying to help out on the Anglo Welsh open day again.

On Wednesday Steve, the yard manager, got a call from his American hirers saying they would not be returning their hire boat as they found the locks "Far too arduous" and had checked into a hotel.  The boat was abandoned by Cow Lane bridge in Chester.  Somehow Steve had to get the boat back but was short on hands to do it so I volunteered my services.

Next day, together with a good friend Mark, Smudge and I set off from Chester in the abandoned hire boat and thanks to all the locks being in our favour we got back to Bunbury by tea time, in good time for the boat to be prepared for its next hirers the following day.


Smudge, bless him, was at first confused.  Why were we on this strange boat dad?  Its not as nice as our home is it?  Still he soon settled into the routine adopting his now favourite look out position.


We ended the week with Bunbury open day and once more I manned their day boat, Bella, for them. The weather was kind if a little chilly and we reckon we gave about 150 folk a trip along the cut to Tilstone lock and back.  I do believe a few bookings were made to hire the boats too.


Not wanting to over do Steve's hospitality on Tuesday we moved up to the Shady Oak for a few days and will now work our way up to Ellesmere Port over the next few week,s having now started our new phase of living out on the cut for the summer.

So far we're enjoying it immensely and Chris loves coming home after work to a different place.  We have an app on the mobile phone called "Find my friends" and she can locate AmyJo and I using that.  Her work mates find it amusing she does not know where home will be until she finishes work each day.  Good job we don't row that often, I might turn my locator off so she cannot find me :-) 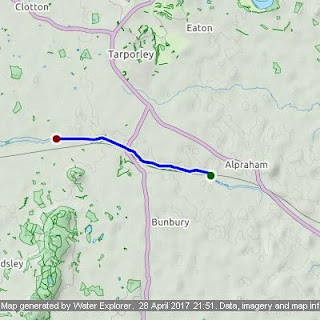 I agree. Wonder if the current one will end up in the cut too someday :-)