We woke undisturbed this morning to bright and for once, warm sunshine.  After the usual routine we got underway at 9am as is now the norm for us.

It was a steady run  with not much worthy of a mention until we got to Hampton Bank.  We had seen this boat with the most unusual name called "Luckie Mucklebackit" on our way upstream and it was only now this evening we found the significance of it.  More later.


We had a lovely cruise past Bettisfield passing several boats, well the season is now getting into full swing so its to be expected.  Our plan was to moor just before Prees junction and walk the Mosses with Smudge.

All was going to plan and we manage to moor on the visitor moorings before the Junction.  Whilst tying the lines a familiar
twinge was felt in my back and as I stood up a searing pain confirmed my back had gone.  The usual muscle spasm that has plagued me for years came back to haunt me after a good spell with out it occurring.

Chris so wanted to walk the mosses I persuaded her to go on whilst I settled down with some pain killers.  It was looking like we were going to be here for the night.

The Bettisfield mosses straddle the English border, near Whitchurch and Wrexham.  They lie in  one of the biggest and best raised bogs in Britain. Its astonishingly varied wildlife makes it a place of international importance. 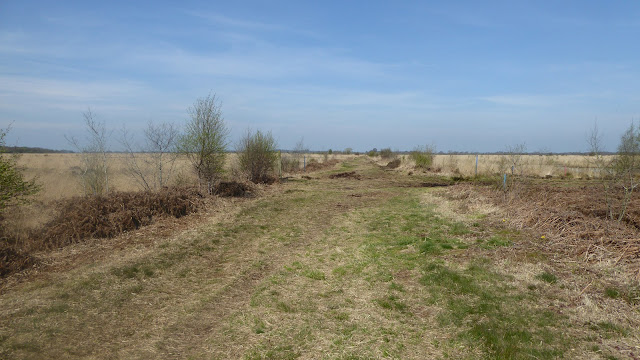 Part of Britain’s third largest lowland raised bog they are now a Site of Special Scientific Interest. Natural England and Natural Resources Wales have been restoring the Mosses, since large-scale commercial peat cutting was stopped in 1990. This preserves the irreplaceable record of our past in the peat, conserves rare boggy biodiversity, provides wider environmental benefits and mitigates climate change by keeping the peat carbon stored in the bog. 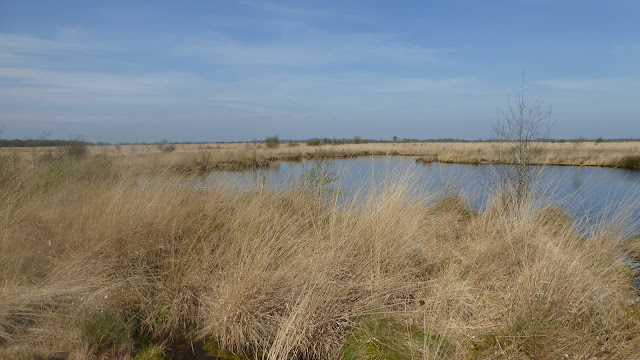 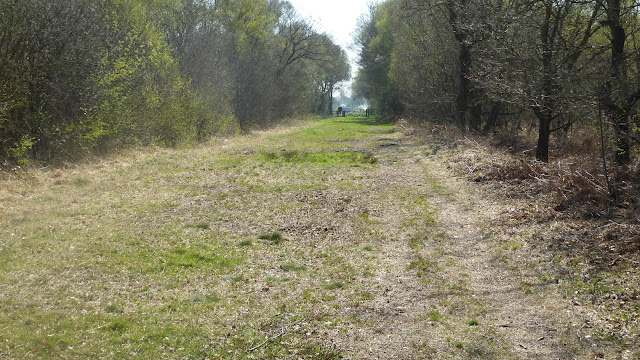 Chris and Smudge followed one of three routes through the mosses, theirs taking in 1.5 miles of a circular walk 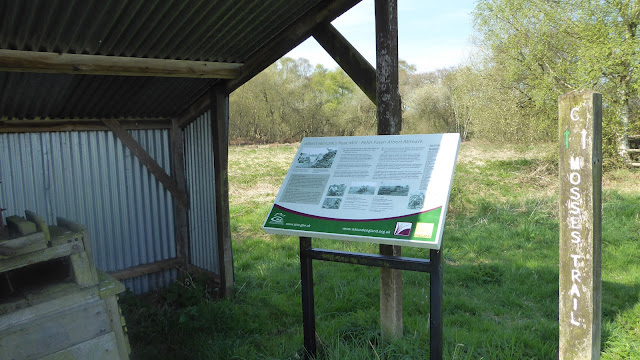 The end of the walk brought them back to the canal and a much appreciated cuppa and spot of lunch. 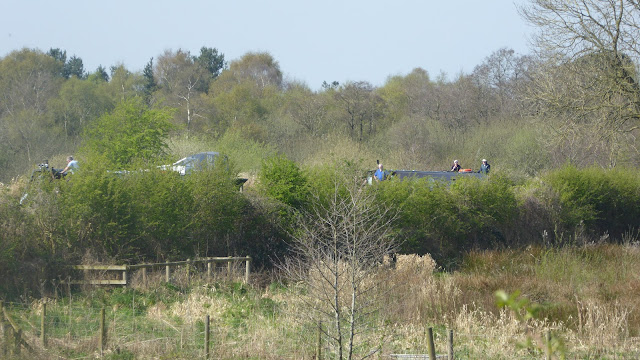 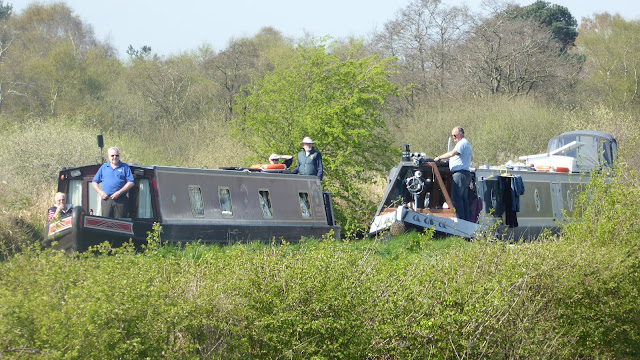 By now the pain killers were doing their job and my back felt good enough to continue cruising.  Chris slipped the lines and we got underway again.

First job was to make the left turn and pass through the lift bridge 45, an unusually low bridge whose deck sits on the canal surface.  We could see to boats approaching in the distance but they seemed to take forever to even begin to get close.  We opted to closed the bridge as traffic was building and left them to operate it when they finally got there some time later.


At the next lift bridge 42 another boat was already there and her crew opening the bridge.  We waited in the ever increasing breeze making holding staion tricky and once through their crew motioned us through which we obliged.  Poor woman than had to wait as two more hire boat crept towards the bridge coming from the opposite direction to us.  She did not look too pleased they were taking their time.  As we passed them we asked them to get a move on or she would have to close the bridge on them.

We finally reached Whitchurch but not before threading our way through all the boats at the viking boats yard.  I just got through the bridge before meeting boats coming upstream past the yard.  It was a bit of threading the needle but we got through unscathed.

On winding in the arm we moored up in exactly the same sport we did on our outward journey last week.

Now, back to the Luckie Mucklebackit.  At the entrance to the Whitchurch arm a new memorial garden has been created in memory of Mike Johnson, who it appears, was the late owner of the Mucklebackit.  Seems he was a very active member of the Shropshire Union Society and played a big part in the upkeep and restoration of the canal hereabouts as well as the Montgommery canal.  The Whitchurch Arm Society owe him a lot for the current excellent condition of the arm. 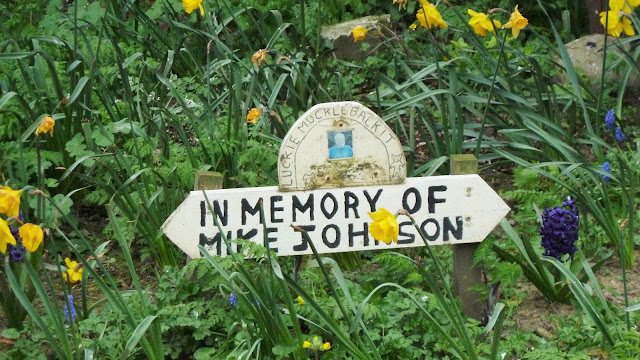 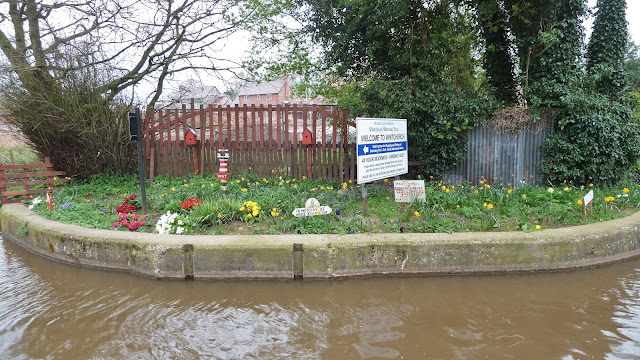 Oh, and on further investigation it seems the Luckie Mucklebackit was also a steam locomotive.  Ironic that a narrowboat should sport the name of a train  (or is it the other way round) that in a way helped to kill off the working boats in the end. 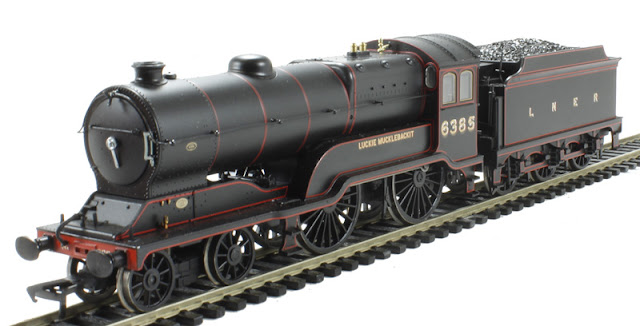 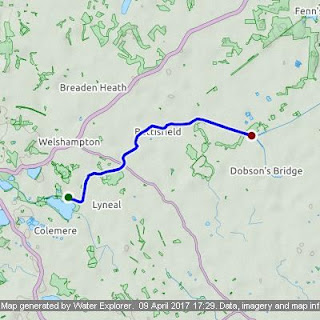 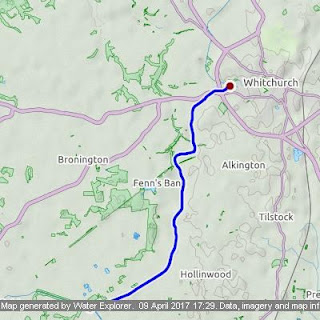