This morning we were woken by Smudge who was desparate to go out at 6:30.  Poor fellow must have had an upset tummy as we did not make it in time.  Enough said about that.

With angry looking sky we slipped the lines at 9am and cruised the short distance to Hurleston Locks.  Like Bunbury, they too were bereft of life, ours being the only boat to climb the lock.

I nosed AmyJo onto the lock landing and Chris let down the first lock.  When ready, it was a tight turn to line AmyJo up to enter the chamber.  I had to gently nudge her port bow onto the wall to allow the stern to swing round and line up.  There are barely 4 inches of room in the lock so its esential to line up before entering the chamber.


Eventually, having had his fill of sticks, Smudge came back aboard for his reassuring cuddle.  We tend to forget he is still a puppy at 8 months old and likes that little hug to let him know all is well.
.
Chris, however has to wait for her cuddle later so soldiered on lock wheeling.  By now those black clouds were gone and the sun made a most welcome appearance resulting in temperatures warming nicely putting a smile on our faces.


On exiting the top lock we could here a familliar knocking coming from the prop.  Time to visit the weed hatch, so we pull up and got the hatch off.  Nothing more than a large twig was found so either that was causing the knock or, the prop jockey had fallen off as I reversed to a stop.

We soon past through Burland and then Mountbatten and her butty moored looking forlorn.  Is a shame John and Hannah no longer do the coal runs as we always enjoyed doing business with them.  Having the baby I think they made the right choice to go shoreside, though I have a feeling once the she gets older we might see them back on the cut one day.

Both Swanley and Baddily locks were in our favour so we passed through them in no time.  We found Wrenbury moorings almost empty so moored in a lovely spot between the trees in full sunshine so the solar panels could make the most of it. 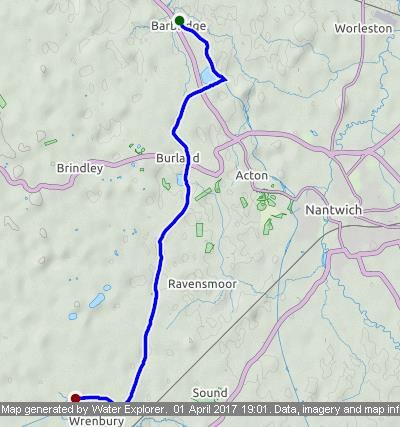