This mornings weather was grey and overcast and deteriorated as we cruised.  We left the mooring at the usual 9am and there was rain in the air.  The sort you feel occasionally but everything slowly gets wet.  Once again we were the only boat on the move, going through the lift bridge on our own without the sudden appearance of boats behind like previous years.

We locked through Quoisley, Willey Moor and Povey locks meeting few boats coming the other way.  After Povey lock Chris spotted our first lambs of the season.  They looked to be only a few days old.

By now the rain was becoming more persistant and the pram hood was raised to stay dry.  Chris though, insisting in lock wheeling, got her wet gear and wellies on.  Where there was no road Smudge was allowed off the boat and was very well behaved most of the time

We reached the Grindley Brook locks around 1pm.  As I started into the bridge below the bottom lock I sounded the horn and got a reply.  A boat was just coming out of the lock.  He waited as I came through the bridge and we passed each other.  Apparently he stopped and cheerily called "You tooted first so I stopped".  Never heard of that one before but it was gentlemanly of him to allow us through none the less.

Not sure why but the middle of the three locks below the staircase has a totally differant type of paddle gear on the lower gates.  Its hydraulically operated and you had to wind for ages to lift or lower the paddle.   Glad there are not too many of these.


We worked the locks, Chris setting the lock and, when I was in, opening the paddles.  When safe for me to get off she went on to set the next lock and I single handed out of the lock using our tried and tested, "exit the lock then put it in reverse, nip off whilst the boat is still going forward and close the gate then wait for AmyJo to return to me" method.

At the staircase we went straight in and met the locky in the middle chamber.  She is one of the most helpful and chatty lockies we have ever met and enjoy a chat with her each year.

After a brief pause for water and lunch we continued a short way to Whitchurch.  The visitor moorings online were all taken but were surprised to find only two boats in the arm. As it was now raining hard we decided to call it a day.  Flushed with my success at reversing at Christleton I reversed AmyJo into the arm and onto the moorings below the winding hole.


Sods law.... no sooner had we tied up the rain stopped and the sun came out.  After a cuppa we took Smudge for one last walk before settling down for the night.


We found a lovely trail that went through woods and lead back to the cut so a nice round walk to end the day.  By now Smudge was exhausted so is now sound asleep after tea as I type.  He'll get a short walk before going to bed.


I think the reason for the arm being so empty is a large building site on the offside is currently well underway though being a weekend is thankfully quiet at the moment.


Interestingly another boat has just reversed in in front of us called Sammy Jo.  I wonder if it is so named for the same reason as AmyJo? 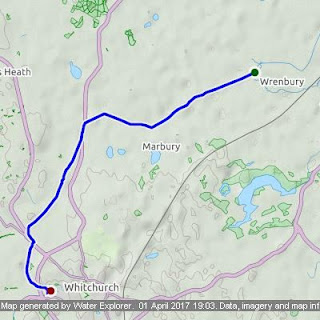 Interesting to follow you on your way from Wrenbury to Llangollen as we are doing the same route in May!