They say this time of year one can expect extremes of weather.  Well they certainly got that right!  After yesterday's warm and wet weather we woke to clear sunny skys and a frost.  The heating was soon on as the fire had been allow to die out over night.

We got underway at 9am as usual leaving Whitchurch arm with no wind and not a cloud in the sky.

At the next lift bridge Chris found a novel use for the mooring bollards.  Why not use them as dog lead retainers?  Worked a treat.

The run to Prees Junction was fine in the sunshine but the cut was so quiet.  We have never known the Llangollen to be so quiet.  Hardly any boats about not even moored.  We did eventually find ourselves behind two hire boats, one of which pulled out behind the hire boat in front of us causing us to slam into reverse quickly (and no apology given).   They kept going, following far to closely to the boat in front of them almost button to button.  Eventually the lead boat decided enough was enough and pulled over to let us all through.  This meant at the next lift bridge we could let the hire boat crew in front do all the work.  I know, I know, thats not polite but karma does working in interesting ways.

We cruised the long straight sections to the last lift bridge before the Junction and for some reason the hire boats behind were nowhere to be seen so we worked the bridge alone and continued on our way.  We later found out that their dog had jumped off the boat to chase a pheasant and it took all the crew to round up and get the dog back aboard.

By now the sun was bright and the day pleasantly warm.  Even Smudge settled on the aft deck and enjoyed the warmth as we went along.  AmyJo seemed to be happy too and purred along nicely.  All was well with our lot at last.  This is what we dreamed of doing one day and here we were fulfulling the dream.


Once again no boats about as we rounded the junction.  Where was everybody?  This is so not like the canal over the last 3 trips we made when it was as bad as the M25 and queues everywhere.


At Hampton bank we were passed by what can best be described as a floating skip.  This is a digger and the two crew, covered in mud, looked miserable having a hard time steering the thing which barely made way through the water.  I certainly felt for them.  No shelter if it rained for them.


Shortly after we made the Meres.  At Cole Mere the local sailing club was enjoying the fair weather.  We could make out several Laser dinghies and a Wayfarer.


At this point Smudge started to get restless, a sure sign he needs to go.  I dropped him and Chris off at the next bridge hole and the pair walked the rest of the way to Ellesmere.

Just before Elesmere town is a tunnel. At only 87 yards long Ellesmere tunnel is a little tricky to enter as its entrance is on a slight bend.  I got AmyJo in without problem but the hire boat with the wayward dog which had now caught up hit the parapet hard with an bang that echoed through the tunnel.  I guess that is a quite common occurrence here as on the left of the portal entrance a block of wood now replaces the brick about where most cabins hit it.


We arrived at the Ellesmere arm about 2pm and found where all the boats were.  Here!  The arm was chocker full but some walkers informed Chris an Anderton hire boat had just left so we should be able to moor in their place.  I entered the arm with Chris ashore on the radio commenting where the space was.  When I got there sure enough there was a space but, it was just a tad to small for AmyJo and we thought we would have to leave it.  Fortunately one of the moored boaters offered to move his boat back a bit and we gratefully squeezed in button to button with the boats back and front.  As a thank you I proffered the boater a can of beer and we chatted happily for over an hour.  All the while boats arrived looking for a mooring and left disappointed.  We consider ourselves lucky and our belief that boaters are generally a good bunch restored.

Later I went out with the camera to get the above shot of our mooring and as I returned I spotted the kind boater who let us in teaching this young lad who came from another boat how to fish.  It so reminded me of happy memories as a lad when my grandfather taught me to fish.  He was a naval man through and through, I think thats where I got got my love of all things boaty.  I oft wonder what he would make of AmyJo.  He'd probably ball me out for not keeping her navy ship shape though for sure.  So wish he was alive to see her.

Tomorrow we're giving AmyJo the day off and will explore Ellesmere town.  Chris has a few bits she wants to buy if she can get them and, as the weather forecast is for wind, we think we'd be better off staying put. 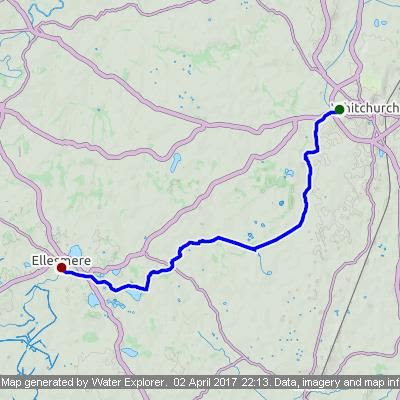