A slightly better morning today and an early start at 8am for us.   Daughter Joanne wanted to visit so we arranged to meet her at the Barbridge Inn as this was easy for her to get to.  Setting off early meant we would get there mid afternoon all being well and, as it happened, all was well.

As we approached the liftbridge at Wrenbury we found the crews of nb Storyteller and nb Grandad Dyer readying to get under way.  Apparently they got stuck for two hours at Quosey Lock last night as they could not close the gate and called out C&RT to fix it.  It was fine for us this morning

The lady on nb Grandad Dyer was already waiting to lift the bridge as we approached. We paused and waited for the others to round the corner then, all three boats passed under the bridge in quick succession. We then went on ahead and opened the next bridge and allowed the other two boats to carry on their way.

We next met Storyteller and Grandad Dyer at the Baddiley Locks.  Working together we got through them quite quickly.  I never did get their names so apologies if you are reading this.  It was a pleasure cruising with you for a while.

The run from the locks to Hurleston is quite straight and nondescript.  One can see a long way ahead through the bridge 'oles.  StoryTeller and Grandad Dyer both stopped for diesel at Swanley Marina and we waved them goodbye as we passed.


At Burland we passed Mountbatten and her butty sitting all on their own.  We understand they are now up for sale.

We locked down Hurlston Locks in record time.  We were the only boat coming down and very time the gates opened for me a boat was just leaving the lower lock.  In fact I was surprised when we pulled into the bottom lock.  It normally takes a lot longer to get up or down these locks.

We were lucky to get a spot at the Barbridge Inn as there were boats pulling in all the time.  One small historic tug had hogged most of the moorings outside the pub and only moved back when their freind in another old boat pulled up.  Turns out there is an historic boats rally at the Ellesmere Port Museum over Easter weekend and the boats were making their way there.

We got in opposite the pub and deployed the anti shelf devices again to good effect.  Joanne joined us at 4pm and we then went over and had a meal to celebrate her birthday tomorrow, 12th. 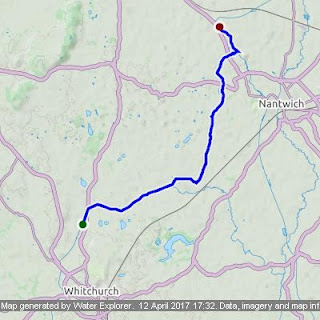