Just after I posted last night  "Oh Dear Me" came past and her owner said "You stopping there?" with a frown "Yes for the night" we replied cheerily.  "I wouldn't if I were you, pretty rough here".  We though Oh well can't be that bad but when a dog walker asked the same question and we got the same answer we decided to take their advice and move on.  I remembered after Clayton-le-moors just past swing bridge 115 there was a lovely quiet stretch with fantastic views across the valley so we ended up having a peaceful night there instead.

This morning came with grey sky and very light drizzle but none the less our location was still breath taking.  We had planned a short trip today so as I'd not cooked so far I treated everyone to one of my gut busting full English breakfasts but minus the sausages as we had none and after which, with Alan on the helm, we got under way.  Just after we got going we came across this boat 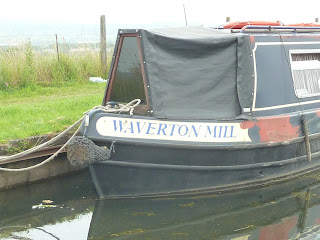 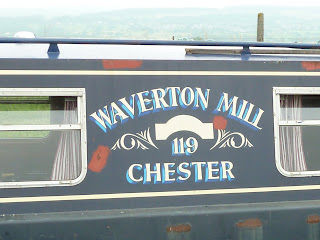 Now as we come from Chester this roused interest but sadly the owner had the boat long after she left Chester and had bought her locally and did not know much about the city she was naed after.  Waverton is a village near us and was where we first moved to when we came to the Chester area to live.  The mill however, is now a trendy block of apartments at the canal side better known as Eggbridge No. 119

Next we came to Gannow tunnel.  Usually, for some reason, in the past I have ended up steering the boat on previous hires through tunnels like Harecastle and so on but today it was Catherine who navigated the tunnel so I took the oppotunity to sit in the well deck for the ride

Now I owe the good folks at Burnley and apology as coming from Liverpool end Burnley is nowhere near as bad as I made is sound the other day so I did it an injustice, in fact, despite some deliliction of the mills hereabouts it does have an attraction of it's own 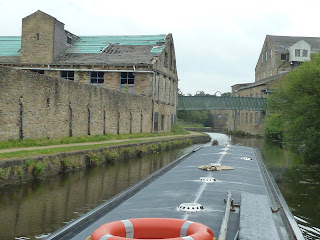 However, just before bridge130b at the Weaver's Triangle we found another little oasis we can highly recommend.  On the way out we had spotted the Burnley Wharf Museum and Toll house and resolved to stop there on our return.  Well we did today and guess what.... 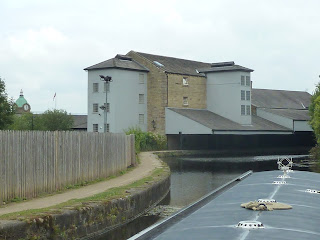 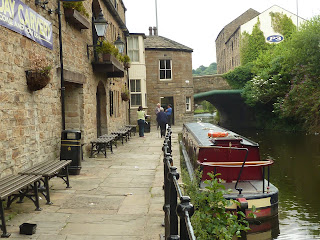 You guessed it, it turned out to be another restored Wharf with Pub serving lunches.  With one and a half hours to wait until the Museum opened and the smell of food and cask ales in the air we gave into temptation and enjoyed a fantiastic lunch in the superb interior of the mill (well it would have been rude not to) :-) 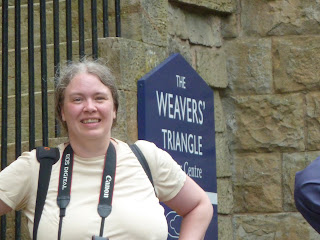 We can also recommend the Wharf museum as itis a delight and full of local history, whats more it's free!  The curators were more than helpful and a mine of information making it an interesting time at the museum, It even includes an authentic victorian working water closet.

Having spent best part of the afternoon here it was time to leave though we could have happily stayed much longer.  After an hour along the cut we pulled into Reedley Marina for the night and use of the showers and fascilities that are second to none. 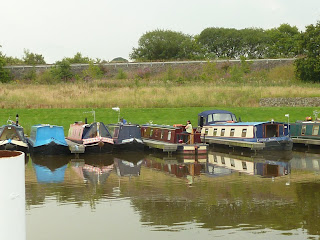 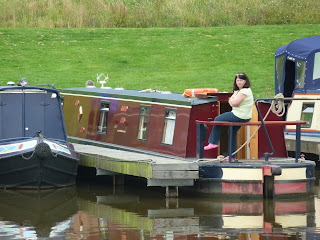 Now as AmyJo will be moored in a marina I asked Alan if he would mind me taking Ila's Drum onto the alloted pontoon as I've never had to do this yet.  With a croud of local boat owners watching on thinking this will be fun, I did not have the nerve to moor stern too but did a credible job and brought Ila's Drum alongside the pontoon perfectly.  Just have to reverse out and wind round to get out in the morning now though, hopefully, with less sightseers watching me!
at 19:04:00