A short soggy trip to Skipton

How our weather can change!

Just a short post today.  After yesterday's heatwave this morning woke us with the sound of heavy rain on the cabin roof.  It was still warm but now the heavens opened and we heard on the radio of a months rain falling in three hours in South Yorkshire.  Must not complain though at least it will help keep the levels in the reservoirs serving the cut here but not much chance of photos.

After breakfast we set of about 9am and was accompanied by the boat moored in front of us through last two locks as we left Gragrave. Its so nice to hvae the extra hands to work the locks when there are two boats together.  With the constant rain we seem to be the only souls to brave the weather that by now was getting heavier to a point where I soon found out my waterproof coat isn't. 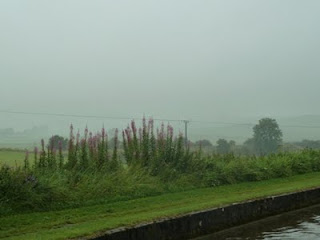 The fine rain was so heavy it formed a fog over the hills making a serene image that the picture does not do Justice but still just as enjoyable as when the sun was out.  This is another first for us.  We've never worked the boat in the pouring rain and would not had we had a timetable to keep to if we were to be back in Silsten for 9am Saturday.  Still as it was stll warm we still enjoyed th eexperience.  Ask me again after we've done this in the winter,  most of you long termers know what I would answer already I guess?
As it was our turn to man the boat I gave Chris the chance to helm the boat as we both felt she would need the exprience when we have nbAmyJo.  She did a great job bringing the boat into the two locks perfectly and with another boat in the lock already without hitting anything, not bad concidering it was her first time ever I was quite proud for her and her smile says it all!  After Chris had negociated dropping Alan off to open 3 swing bridges I took over to moor the boat in Skipton just up from the juction as Chris was nervous about doing so (her time will come sooner or later).  There seems to e a lot more boats here and we are glad we started before the rain stopped as since we have been here and the rain has stopped several boats are going by looking to moor up.  There are no spare moorings around here now so they may have to moor up out of town.

We plan to stay here now until lunchtime tomorrow to give Catherine chance to explore the town and it's spectacular castle.  The wharf here is interesting and full of boats of all shapes and sizes.  We are just enjoying the atmosphere and looking forward to Fish & Chips in Bizzy Lizzies restaurant on the quayside tonight.
at 15:18:00