This morning was grey with light mizzle though still quite warm.  Having had a very peaceful night in the Marina we paid our £9 and thanked the Marina Manager for his hospitality.  All that was left was to reverse out of the mooring and leave via the narrow exit.  I’ve discovered Isla’s Drum will not steer going astern but will keep a straight line, so with that in mind, I backed out of the birth, held my breath and started to wind the boat round in the opposite direction.  Much to my relief all went well and I managed to exit the marina with my pride intact and feeling pretty chuffed with myself if I may say so. Isla’s Drum responded just fine, I got her round smoothly and exited the marina without too much throttle and so we got under way unscathed. 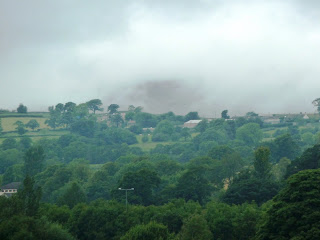 The weather was closing in and we caught site of this cloud coming over the hill making a spectacular vista.  However, not long after it started raining but luckily we had stopped at Morrisons in Nelson to do some shopping.  Morrisons here have thoughtfully provided moorings (room for 2 60ft boats) for visiting boats so its well worth a spending a short time to stop and provision here. 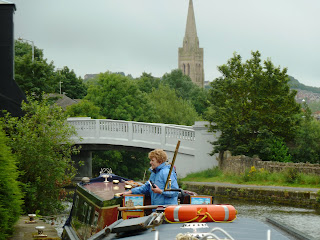 A pleasant time was had chatting in each chamber and we noted how low the level was in the reservoir compared to our outbound trip.  Even so the levels in the lock pounds were still high 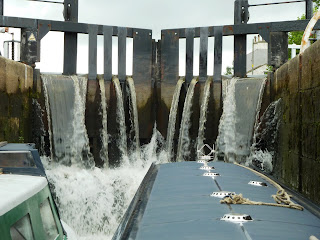 as in one chamber the upper pound level was far too high causing our chamber to fill without opening the paddles. Needless to say the beer in the bow locker was nicely cooled when we reached top lock.

After passing through Foulridge tunnel we decided to stop at Foulridge Wharf for the night.
It’s a delightful place with a café/Bistro as well as BW facilities (sadly out of service while we are here).  As it was only 3pm Catherine, Alan and Chris decided they would walk the tow path route back to the other entrance to see what it is like 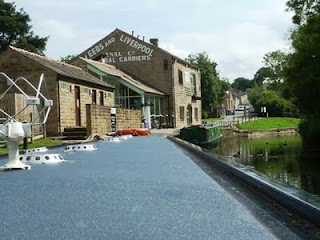 So that us for today, Tomorrow we’ll head for Gargrave.  That’s all for now it’s just started rainning so I’d better go shut up the boat.
at 18:20:00