Today was going to be  long haul and an early start.

Chris was keen to get moored in the Whitchurch arm and explore the town.  I thought this would be a long shot as last time we tried the arm it was chocker with boats.  Still, I thought, we could moor online and the walk would do us good.

Blake Mere is known for its beauty but the view at 7:30am this morning as I opened the day room side doors was breath taking.  We could have been in Yellowstone national park except here the risk of bears was negligible.


We got underway at 8 am and within a short while we were confronted with several C&RT workboats across the cut restoring the banks by a winding hole. They stopped and moved their largest workboat out of the way and waved us through.  I did feel for the crew of a nearby hire boat that had moored for the night yards away.  They did not need their alarm clocks this morning for sure!


The run past Cole Mere was uneventful with few boats on the move yet.  All was going well until just before Lyneal Wharf.  At a tight corner I could see a hire boat going quite fast coming the other way.  I slowed before the turn anticipating what was going to happen and as predicted it did.  What I was not prepared for was both helmsman and his crew were not looking where they were going and were looking at something in their hands (a pearsons I think).

As you would expect the boat hurtled round the corner into my path.  The crew spotted us at the last minute and slammed into reverse bouncing hard off the armco.  I had already seen what was going to happen and already had AmyJo in reverse and we both came to a stop bow to bow feet apart.

I passed them on the wrong side and advised them in strong terms to bl&^dy well watch where they are going and slow down at tight corners in future.  The helmsman apologised and the  smile quickly disappeared of his face.

After this things calmed down and the run to Press Junction had very few boats on it.  In fact this was the only boat coming the other way we saw until the junction 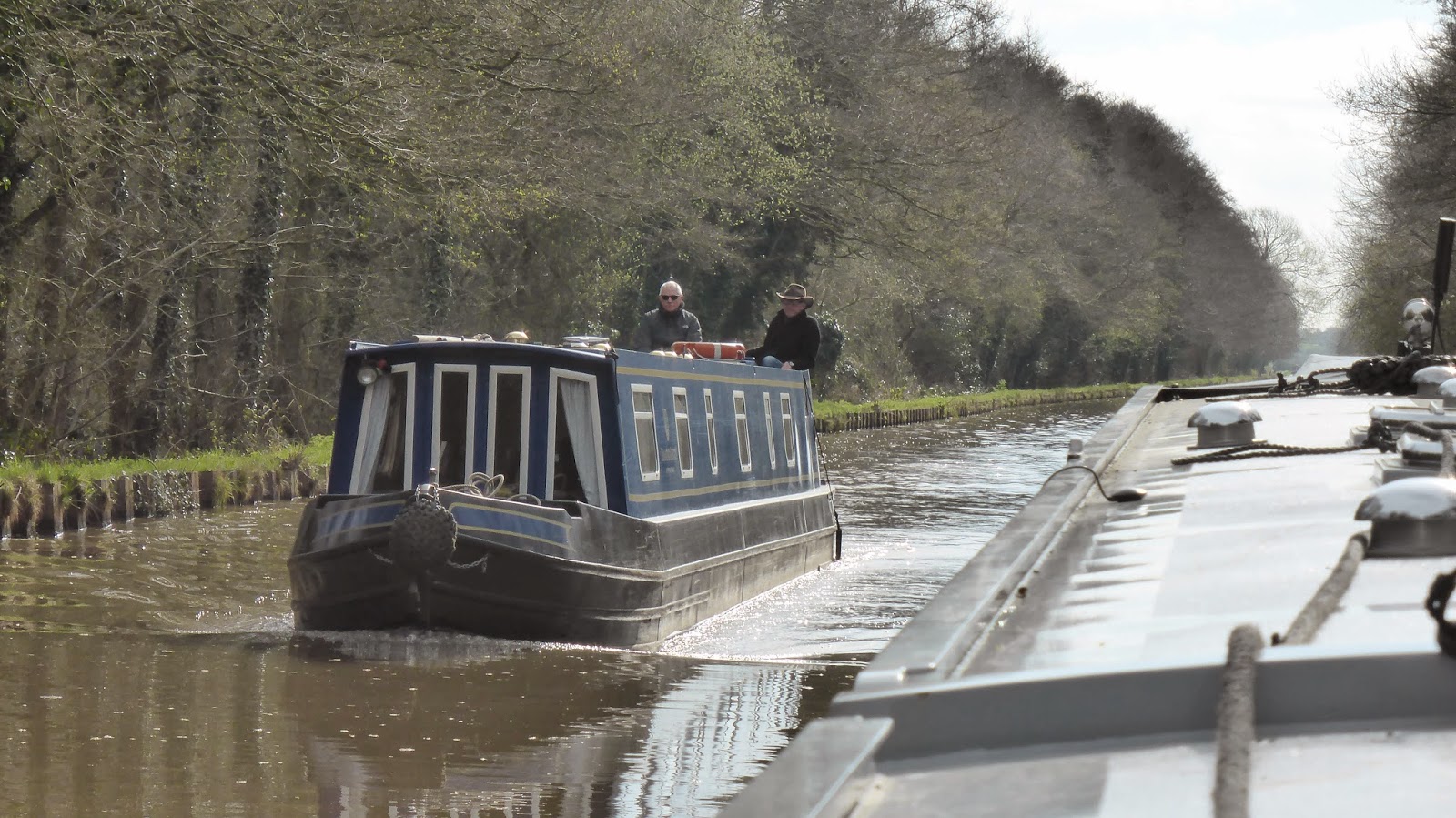 I believe this section of the canal has been subject to several breaches over the years as the banks here arE heavily re-enforced as the cut is mostly on a raised embankment.   Signs warn of no mooring though I would not fancy mooring up against this.  Behind the trees lay acres of wild life sanctuary as far as the eye can see 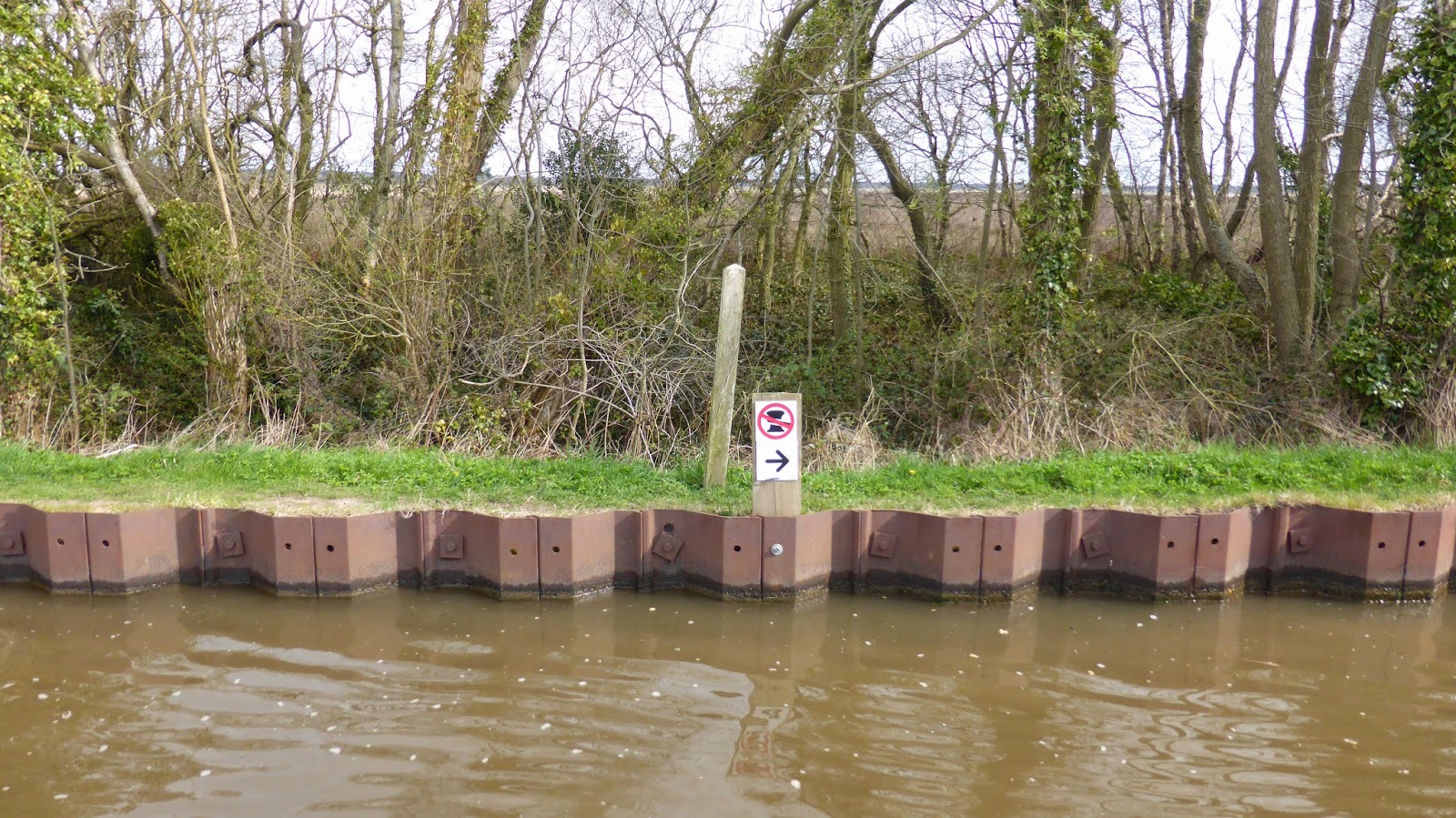 At the junction we rounded to stay on the main line giving Whixhall marina amiss this time.  Time enough to explore on another trip

Shortly after the junction is the first of many lift bridges.  Chris disembarked with radio in hand to raise it, however, there came a slight delay as she became quite alarmed that, whilst raising the bridge a sparrow was sat right where the bridge buffers meet the stops when raised and would be crushed if she continued.  It seemed quite happy to stay there as Chris began to raise the bridge.  Chris hesitated and waited but still it remained.   Chris slowly continued ready to stop if must.  Thankfully it moved out of the way at the last minute but only by hopping onto the buffer itself much to Chris's relief.


By now another boat had caught us up and offered t close the bridge after they passed through. We would be bridge hopping with them all the way to Whichurch. 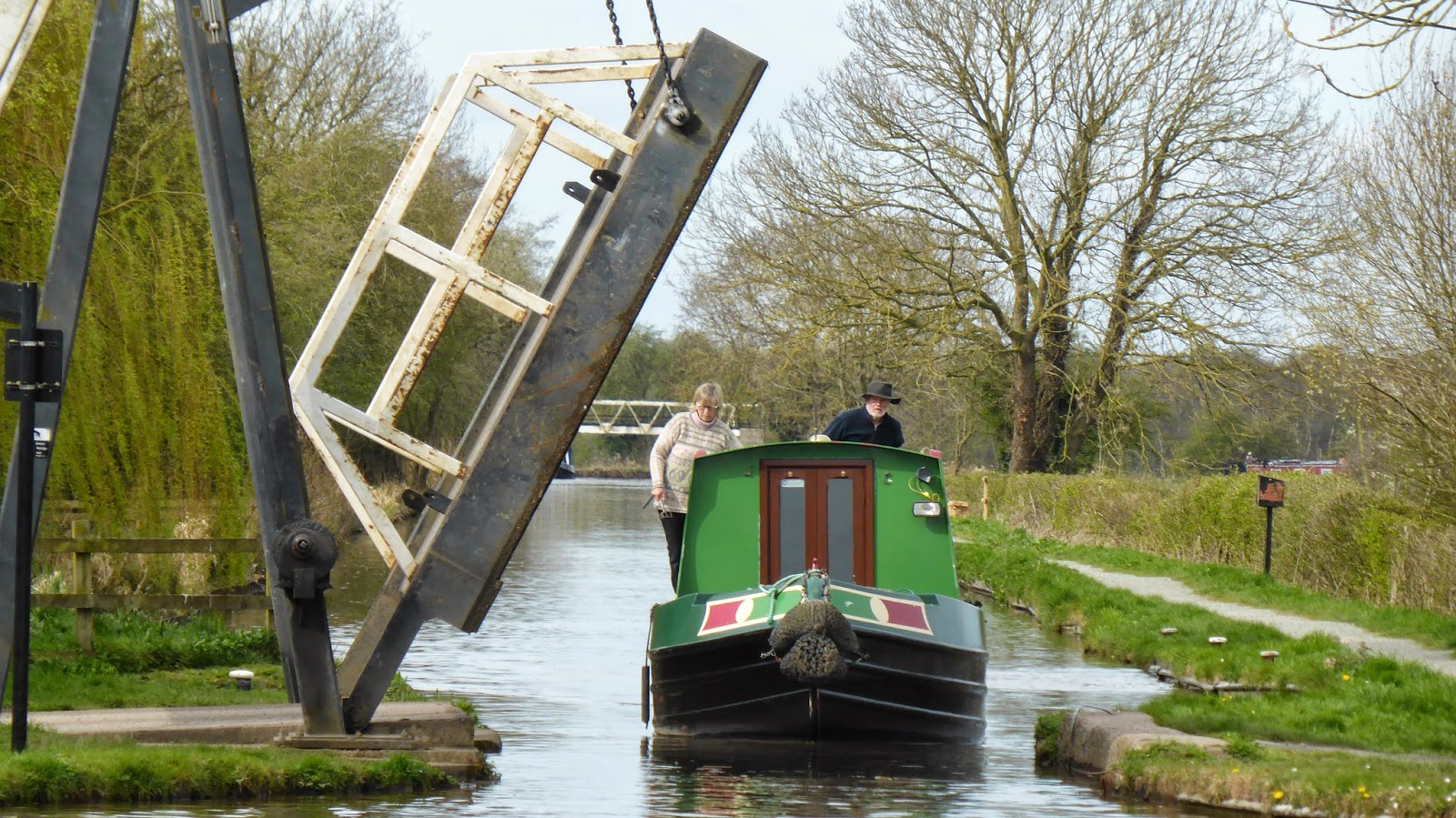 At the next bridge Chris raised it and we let the other boat pass through then closed it.  We followed to the next bridge.  Here the lady got off and raised the bridge.  We expected her to leave it for us to close but waved us through.  She then walked the two miles at a furious pace to the next bridge.  Apparently she tries to walk 4 miles a day at this pace.  It was tiring me out watching her, phew!


This continued with the lady racing ahead preparing bridges until we reached the Whitchurch arm where we waved fair well and thanked her as we turned into the arm.  Now would we find a mooring or not?


The entrance is tight and can only be entered coming from LLangollen.  Boats coming from Grindley Brook have to wind at a nearby winding hole then retrace their route to get in.

Just in the arm was a mooring we might have squeezed into but we felt we would block the exit so we gingerly continued in.  There were lots of boats in the arm down to the winding hole so we started our turn.  Unlike yesterday today the turn went well.

I had all but given up hope of mooring here until, as we almost completed the turn, I looked up the arm and spotted what looked like a possibility.  It would mean reversing AmyJo between boats for a 100 yards and then we might not fit between the boats.  We felt it worth a try.

AmyJo faultlessly reversed for me all the way back to the spot that could have been left just for us as we slotted in with feet to spare.  Last but one boat from the very head of the arm.  I admit I am quite chuffed at achieving the reverse without hitch nor hitting the other boats.

A chap in the boat ahead of us appeared and said.  "That seemed like a hell of a lot of effort, would it not have been easier to moor out on the cut?"  Chris informed him it was her wish to stop over in the arm and yes it was worth it.  He seemed to respect that and offered good information on how to walk into town.  He even gave guidance on the best pub in town.  More on that in a minute.


The walk into town largely follows the course of the original canal.  Sadly it looks unlikely the arm will ever be extended due to new housing developments and, as the arm is not owned by C&RT but the Whichchurch Waterways Trust, we get the impression local boaters would prefer their little haven to remain as is.  They seem to tolerate visitors but give the distinct impression they would rather one does not disturb their community routine. 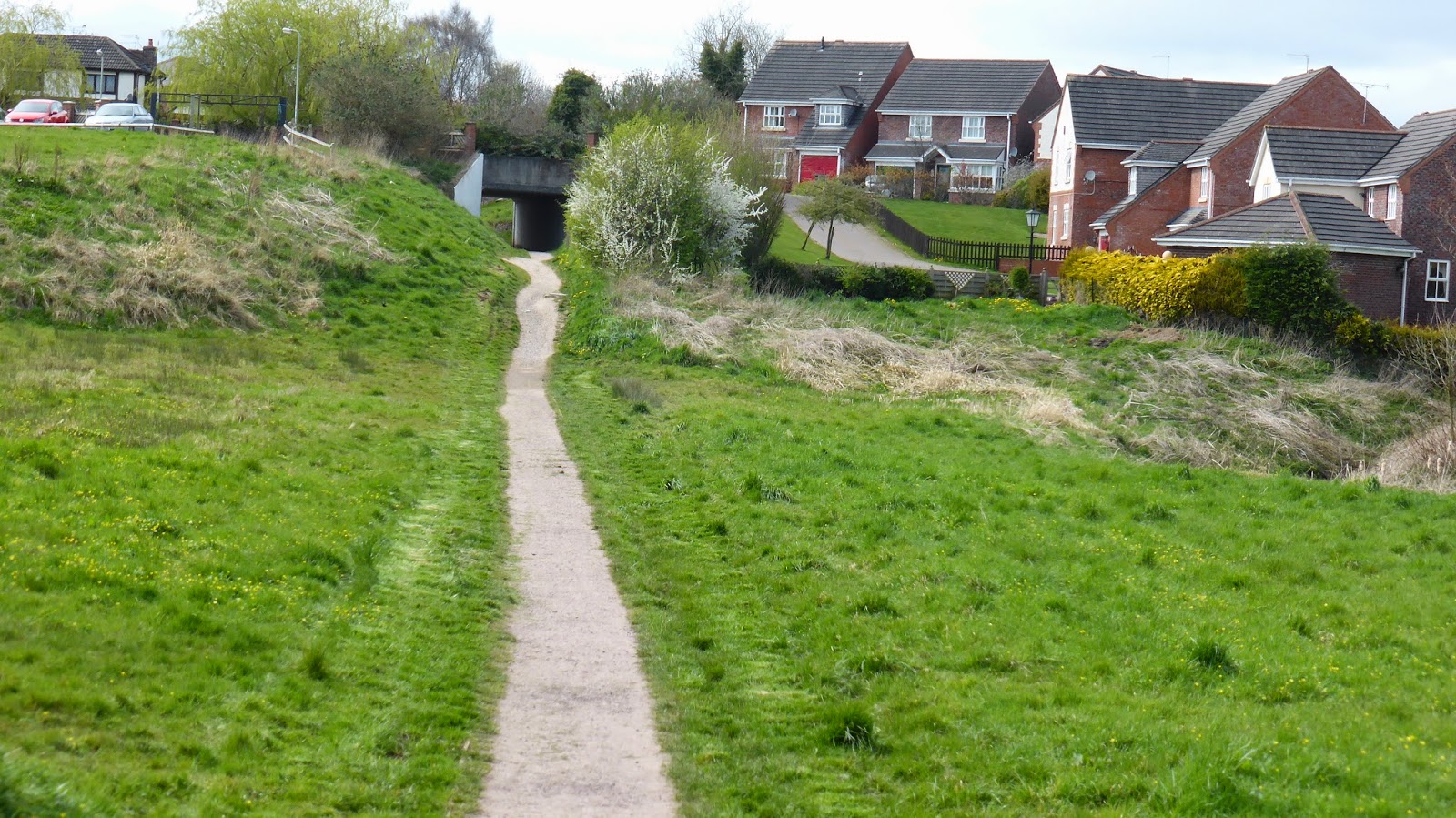 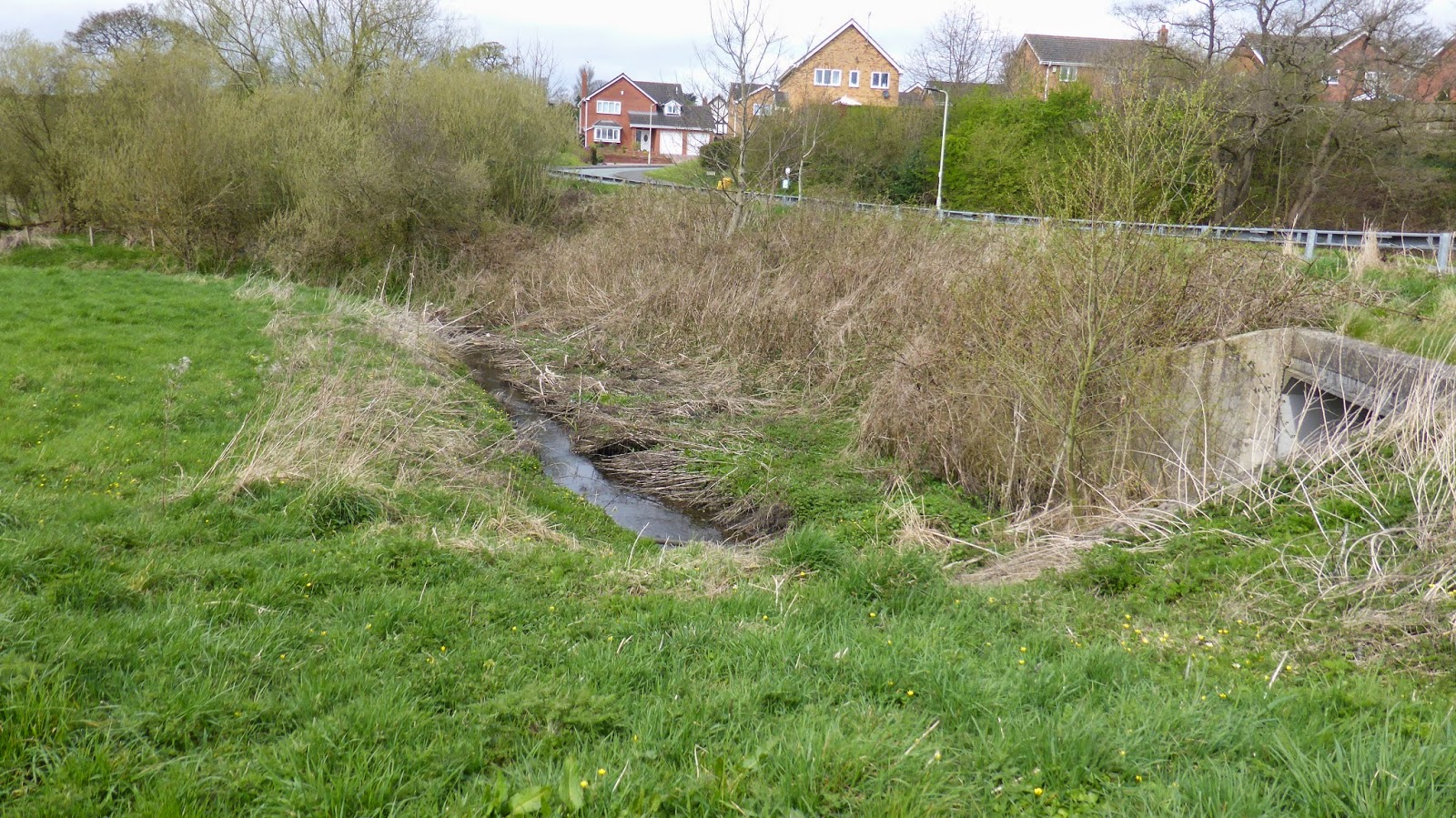 Whitchurch town centre is delightful with many shops to give interest.  It even has a small clock tower in the centre.


We wandered around for a while enjoying the streets.  Of course we could not visit the town without trying out the pub that had been recommended to us now could we?  Its the Old Town Vaults, a Joules brewery pub.  I can say this is a terrific pub with superb real ales.  The landlord is very welcoming and the pub is spotless.  It also boasts the only outside loos in North Shropshire that are grade II listed. 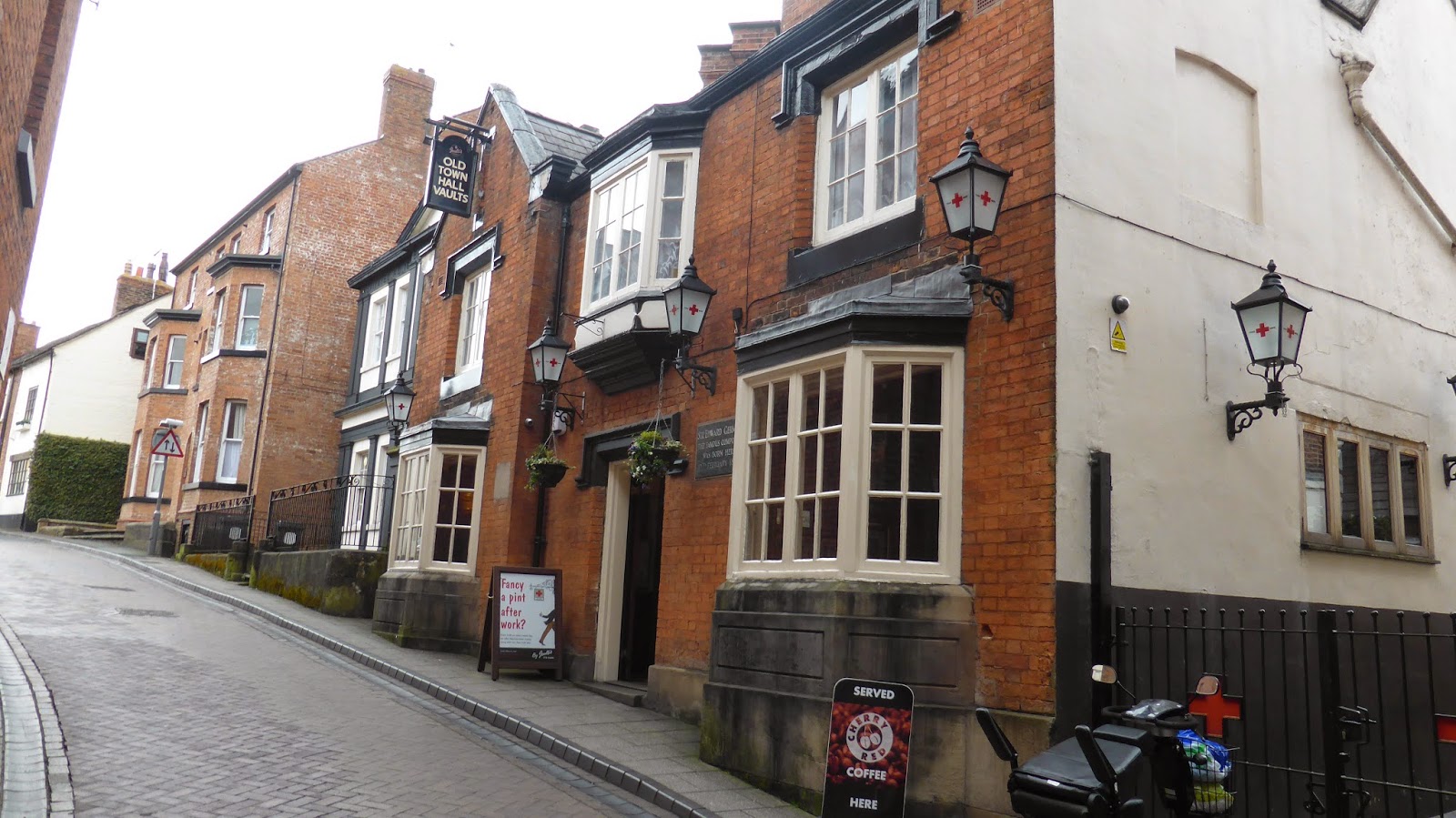 After that it was back to AmyJo for tea and a blog catch up.  On our return we were concerned to notice several scratches along AmyJo's cabin sides that can only have been caused by tree branches though I cannot recall any large enough to have done so.  Luckily with a bit of elbow grease and polish we managed to removed them after about an hour. 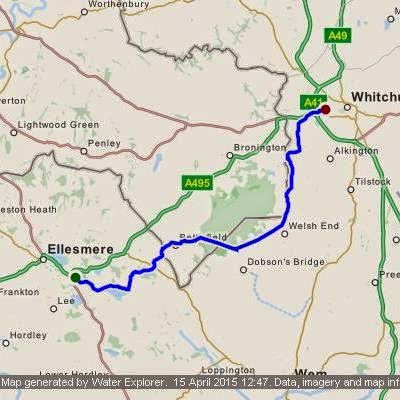