Day 6 Weaver Cruise - back to Middlewich

I forgot to post this yesterday. While at Anderton walking the dog I came across a van who's owner clearly has a great sense of humour.  I reckon his passenger has been waiting quite a while for them to return.

Anyway back to today.

We were woken at 7am by a loud nose like metal scraping on metal.  I looked out but could see nothing wrong.  No sight of a boat having passed and Lucille was laying quietly alongside not moving an inch.  We still have no idea what the cause of the noise was but nothing seems to have been damaged, nor paint freshly scraped off.


Despite a harsh frost the morning was bathed in glorious sunshine, though it felt quite cold.  A loud bang was heard as someone was hunting in the woods nearby.  Further shots sounded much closer so I got the binoculars out but could not see the shooter.


I know someone will ask about the wisdom of mooring with those railway rails so close to the boat.  In fact they were a good foot away from the cabin side and no chance of them catching AmyJo's paintwork, though I admit I had to be very careful when mooring up.

We got underway and cruised in the bright sunshine.  The sun is lower this time of year and a times we found it difficult to see where we were going as we cruise with the sun in front of us.  No problem, we just slowed down until we rounded a bend.

The rest of the journey went without any problems, we passed the flashes and the 3 marinas, Woodlands, Park Farm, and Orchard.


After bridge 189 we crossed Croxton Aqueduct, the river below now much less flooded than when we passed here a few days ago.  The reduced level revealed a lot of mud and scoured away banks.

After a short stop for water at Big Lock we then started the climb through the Middlewich locks.  Eric stopped for water below Andersen boats yard while we worked the locks.  After each lock we reset them for Eric but a boat sneaked past him with four men on board as he was about to get underway.  They must have though their luck was in with us above them resetting the locks.  Chris returned to them and asked if they would be good enough to reset the locks as they went as Eric was now approaching the bottom lock.  When Chris walked back down the locks to help Eric while I moored up she found the four guys had ignored her request so let them know her displeasure.  They, embarrassed, did not look at me when they passed me above the top lock!


I mentioned the other day about the crocheted squares we had seen, one at Marbury Country Park and one at Middlewich.  The one here at Middlewich is pinned to the now derelict cafe above the locks.

At Wardle lock we found three boats waiting to ascend and one coming down.  The skipper of the latter proundly announced he was only winding so don't close the gates.  No chance!  The skipper of one of the boats waiting at the head of the queue told him firmly he would have to take his turn in the queue like everyone else who had been waiting.  The former was not happy but when the other skippers were also saying the same he had no choice but wait his turn.  We stayed out of it happy to wait our turn.

The skipper then tried it on when, eventually it was Eric's turn for the lock.  Eric had to wait the otherside of the bridge 'ole and came forward as AmyJo went into the lock.  The winding (or should that be winging?) skipper started to have a go at Eric for jumping the queue until Eric told him he'd been waiting as long as the rest of us the other side of the bridge 'ole. He then stomped of mumbling under his breath.  To be honest we would have just let him go up, would have been a lot less fuss!

We found some free moorings above the lock and went for a food shop in town.  When we got back we got a chippy tea from the local chip shop and settled down watching tele for the night. 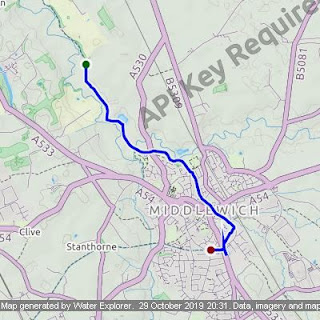 Your knitted or crocheted squares are an example of Yarn Bombing. I can't remember how or why it started but a few years ago we saw town trees wrapped in scarves, then the last few times we've been through Thrupp on the South Oxford I've taken photos http://nbchuffed.blogspot.com/2019/07/thrupp-just.html and http://nbchuffed.blogspot.com/2018/08/cows-congestion-and-knitted-spider.html
Keep your eyes open!
I'm sure there is info on the web if you look
best wishes
Debby

Thanks Debbie
Of courdse :-) I'd forgotten about yarn bombing.