Day 3 Weaver Cruise - At last the rain has stopped

The good news is Smudge appears to have improved this morning after a peaceful night,  he's still not his old self yet but we had a waggy tail and he wanted to play ball with me for a little while, all be it a lot less exuberantly than usual.


The bad news is it was still pouring with rain and hadn't stopped all night.  The forecast showed the rain clearing lunch time so we stayed put.  Sure enough while we enjoyed a sandwich in the Marina cafe the rain did indeed stop as forecast.  The leaden sky looked like it was brightening up so after lunch we cast off and got under way at 2pm.

Leaving this late in the day ruled out getting to Anderton today so we decided to stop at Middlewich for the night. My concern now was with so much rain in 24hours would the River Weaver be in flood and unnavigable?

After an uneventful run down to Michull lock we arrived just as another boat was entering the lock from below.  Chris went to help them up the lock and by the time the lock was full the boat was sitting in a mass of bubbles so thick it looked like a bubble bath.  Perhaps someone had their washing machine going whilst in the lock?

We cruised on in the dry but grey clouds still threatened rain.  We did feel one or two spots but nothing to get anything wet.  A short while after the lock we passed Aqueduct Marina.  I have to say both Venetian and Aqueduct marinas are now looking quite full, those still moored at Tattenhall Marina can guess why.


We were approaching the Weaver way moorings when Chris spotted a Kingfisher dart out and fly off ahead of us.  We spotted where it landed and Chris got the camera poised for a photo opportunity.  She did not have to wait long and off he went again, this tine Chris managed to catch a photo of him mid flight though not a close up unfortunately

As we passed through the Weaver Way moorings at Church Minshull we got our first glimpse of the river below us.  My fear of it being in flood was confirmed though we were surprised at just how much the river was flooding.  It was clear it was flowing fast so the lift may not be an option, we'll know tomorrow.

Next came Stanthorne lock and the run into Middlewich.  When we got there we were again surprised to find very few boats moored up.  We found a spot after bridge 29 and plenty of free space for the two boats to moor together.

After some fish and chips from the local chippy we went into town for a drink or three. 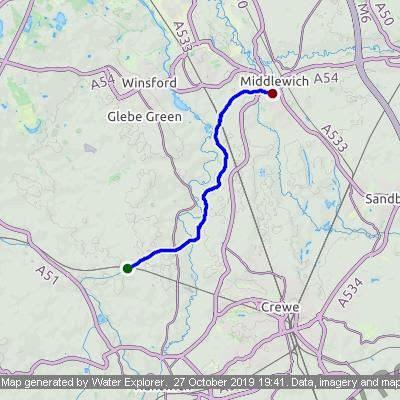