Day 1 Start of Another Cruise, Some painting and pretty lights.

Over the last few weeks Chris and I have been back in our normal routine, Chris working and I doing general maintenance on the boat.  Whilst moored at Waverton and with a window in the weather giving a few sunny days I managed to get AmyJo's gunwales painted black.

We then moved AmyJo a few miles on to Christleton and moored outside the Cheshire Cat pub.  With the weather still set fair I managed to get the port side bow cheek painted with its first top coat of paint.  The darker grey area in the photo below.  I had extended the black of the gunnels to the front of the cratch window but in the sun it got frightfully hot so I decided to put it back as it was in Grey.

Back in the Spring Chris had booked us tickets to go and see Chris De Burgh at the Liverpool Philharmonic Hall.  We have been fans of his since he hit the charts with "Lady in Red"  Last week we went to the concert and thoroughly enjoyed it.  He is still every bit as good as he was and played two of his albums "Moonfleet" and "Into the light".  Not sure why but, we had not heard Moonfleet before so this was even better for us.  The highlight was when he sang Lady in Red and walked around among the audiance.  At one point he was withing feet of us and nodded to us.


Last week Chris discovered that the two Aqueducts, Pontcysyllte and Chirk, together with the Horseshoe falls at Llandidno would be lit up between 7:30pm and 9pm to celebrate 10 years of world heratige status.  On Wednesday we took the car and went to see them.

We were surprised at how effectively they were lit up.  The arches were bathed in Reds, Blues and Whites.  All the lights cycled the colours and pulsed in differant patterns over a ten minute routine and then repeated the sequence.  Sadly our photos do not do them justice.

Best of all though was the horseshoe falls.  Lit in greens and reds the whole area looked magical.  We could have stayed there for hours but sadly 9pm the lights were turned off.   The lights here reminded me of when I was a child and we visited the lights at Southend on sea at night.  A small seaside park called Peter Pans playground was lit much the same way with statues of disney characters dotted around the park.

This week, with Chris off school for half term, and the weather reasonable, we decided we would head out on another short cruise while the weather enabled us to.  This time the plan is to head down the Anderton lift and onto the River Weaver for a few days, rain allowing.

This morning we left the Shady Oak moorings and cruised down to Barbridge.  Our friend, Eric, accompanied us in his boat.  Eric wants to "do" the Anderton lift and asked f he could join us.

It was a bit grey when we set off but as the day progressed it warmed up and the sun made an appearance making it quite pleasant.  In fact at one point it was t-shirt weather being so warm.

At the locks Chris and I worked the gates and paddles whilst Eric held the boats.  At Iron lock we locked AmyJo through first and then Chris stayed to lock Eric through whilst I set the next lock.

We made good time through each of the locks as this time of year is quieter with few boats on the move.  At Bunbury we found there were no Lockies on duty but the locks in our favour.  We soon worked through them and when we reached Calverley we stopped at the Cheese factory for lunch after topping up with water at the services.


After making the turn at Barbridge Junction we cruised the short way to the visitor moorings above the lock by Venetian marina and pulled in for the night. 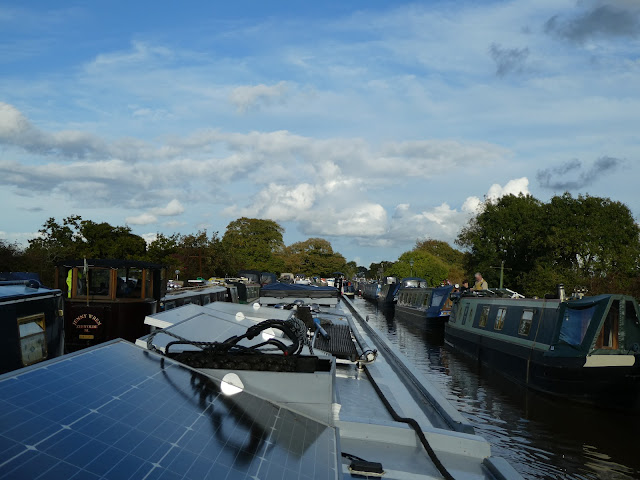 With the sun shining and the evening pleasant we sat out on the towpath for a while and had a beer.  A gent called Mal who has just bought his boat and we met at the Shady Oak moored behind us and joined us.  We sat there chatting until the sun dipped and the temperature dropped then we retired to our boats for something to eat.