When I got up at 8am this morning and threw back the blinds I could barely see across the cut due to a heavy fog.   Fortunately by the time Smudge and I got back from his walk the fog was beginning to lift.

We had agreed to go to the Anderton lift centre and have breakfast when it opened at 9:30am. By the time breakfast was over the fog had almost completely cleared.  By the time we walked down to the river it had completely lifted.

Chris's headache had nearly gone so she was out with her camera.  She took loads of photos today so we'll make up for yesterday.

The River Weaver had quite a substantial flow on it making it impossible to navigate.  The force of the flow could be seen on the visitor berth.  The water had completely scoured the tarmac off leaving the hardcore filler exposed and making the jetty unusable.


Looking back the Anterton lift looked impressive against the bright blue sky.  Chris had been talking to one of the staff and was told that the river had risen to such an extent the casions were completely submerged.  The problem now was that the high level could have affected the electronic safety devices so engineers would now need to inspect everything before the lift could be re-opened.


In the photo below one can see the casions, according to the staff member the river had dropped 3 feet over night so you can imagine just how high it had risen

Tour over we returned to the boats.  We winded AmyJo first and passed Eric getting under way.  For our non boater readers, winding (pronounced win ding) means to turn the boat round 180degrees.  Its termed winding as the horse drawn boats would use the wind to  help turn the boats round.  We then waited for Eric to wind and we set off on our return journey.


As we cruised through Marbury Country Park the autumn colours were full on.  The leaves on ther ground seemed a bright copper against the green and yellow backdrop of the trees.  While I don't like this time of year I can't ignore the fact the colours of the trees and bushes are stunning in the Autumn sun.

Chris spotted this crocheted patch on the barbed wire fence.  We have been seing these since we left Barbridge, any idea who or why they have been left there?

We passed the Lion Salt museum, busy with boats on the moorings.  One day we'll have to go in and have a look round.


All though it was cold it felt great to cruise in the sun.  Fewer boats are on the move now so we pretty much had the cut to ourselves.  Those boats we did pass were near the marinas so we assumed they were headed home from the weekend cruise.

At Winchham Wharf we spotted and familiar boat.  It was Callan Llan our mooring neighbours boat at Tattenhall last winter, sadly she is now up for sale.  She'll make someone a great boat as Dave spent a lot of money replacing windows with double glazed units, repainting outside, and a lot of work done inside.


At the TATA salt refinery they are attempting to make the unsightly pipe bridges look nicer.  This one has the pipes hidden behind a metal screen and images in rusty metal clipped to the screen.  It actually makes an ugly sight look really good.

In contrast, at Orchard marina, looks quite pretty and whilst passing we thought we saw AmyJo moored up, you can see her on the left side of the arch.


On closer inspection we could see its another boat looking idential to AmyJo,  Large windows near the stern and grey gunwales being the only visible differances.


Ten minutes further are two new marinas, Park Farm and Oakwood.  These are filling up fast and Oakwood in particular seems to have double the number of boats in it since the last time we passed here back in June when we were transfering boats for a broker.

This region of the canal there are a series of sunken flashes, one of which includes the canal.  Here, British Waterways off loaded numerous redundant work boats by sinking them in large numbers reminicent of sinking the German fleet at Scapa Flow.  Nowadays many have been recovered for restoration.  These flashes are now havens for wildlife though not much was seen today save a couple of large signets, getting their winter plumage, approaching the boat hopeful of some food being thrown their way.

After weaving through some twists, turns and narrow sections of the canal we reached our destination for the night, Bramble cuttings, at about 3:30pm.  Two boats were already moored there but there was just enough room for me to moor AmyJo between them.  We breasted Lucille alongside AmyJo so Eric could also moor up there as well.  We then sat in the sun having a bottle Becks and a bag of crisps as it was such a nice afternoon.  I love Bramble Cuttings, its such an idilic spot and we're lucky to get a space here. 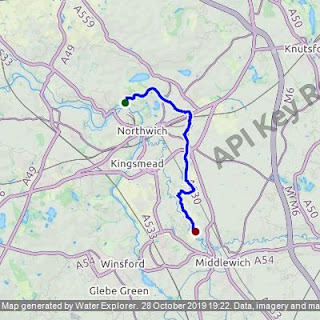