We had a bit of a lay in this morning, even Smudge who is now back to his old self remained under the covers content to keep warm and sleep.

Another bright sunny morning greeted as we got underway at 10:30am.  As normal AmyJo lead the way passing Spey a historical working boat.  I have helmed her sister boat Towy several years ago.  Several of these boats were built and named after British rivers.

Leaving the moorings in Middlewich the view is marvelous and could almost make a picture postcard.  This photo suggests a warm summers evening, in fact its bitter cold when I took this.


Leaving Middlewich behind we passed over the site of last year's breach.  A major engineering works taking several months restored the canal.  Apart from the fresh looking concrete banks one would not know a major breach occured here now.


After passing Aqueduct marina we were passed by a hire boat called Olivia Ginger.  We know this boat well.  She's getting on in age now as it was the very first boat we hired back in 2000.  Nineteen years on its good to see she is still going strong.  We have plenty of happy memories cruising aboard her.


With the sun now dissapearing in the hasy cloud the temperature was beginnning to drop so we decided to moor above Cholmondeston lock for the night. 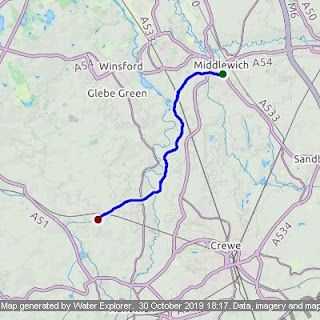