And Today Through The New Round Window

The last few Weeks we have taken the opportunity to stay in the marina and this has given me time to get a couple of jobs done.  One simple and the other a bit more major and time consuming.

The first job on my list only took an hour and that was to fit two long fenders at the bow to protect AmyJo a bit more in the locks and when mooring up.  This protected area of hull can sometimes catch the armco or concrete bank scraping off the blacking.  We hope these fenders will avoid that in future.


The next job has taken several days so far and is still on going.   When AmyJo was being built we always wanted double glazed portholes  Trouble was the only available ones were the top hopper type like these 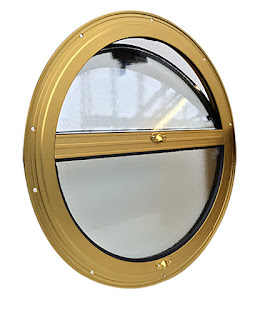 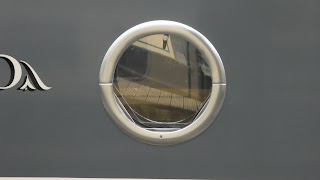 Over the 6 years we have had AmyJo they have served us well but always steamed up and dripped with condensation.  My makeshift secondary glazing helped a lot but we were never really happy with them.

Whilst at the Crick boat show this year we found a company called Caldwells who manufacture some very nice and robust portholes that are double glazed, not only that they had an added feature of a thermal break between the inside frame and outside so this would help to reduce condensation further.  We were that impressed with them we ordered a set for AmyJo.  We took delivery last month.

Taking advantage of some dry weather for the last few days, I have been carefully removing the original portholes and installing the new double glazed units.  The difference is amazing even though so far only the Starboard (right) side portholes have been replaced.  So far the boat feels a bit warmer but we have not seen any condensation at all!

So first job was to remove the Aluminium liners.  This prooved relatively easy as they were held in place by silicon mastic.


The remaining mastic was carefully scraped of with a sharp scraper.  Next the fixing clip screws had to be untightened.  These were most stubbon as many had the head slots rounded of.  Most unscrewed OK but those rounded off had to have the screw drilled out which took ages and several broken drill bits.  So far 40% of the eight clips per porthole had to be removed this way.

With the clips removed it then took two of us all our strength to carefully tease the porthole away from the hull.  The Stikaflex mastic used was holding them in quite firmly but after a lot of effort pulling and wriggling we managed to pull them off with no damage to the paintwork except for small chips on two of the portholes.

The new porthole was then installed using fresh Stikaflex mastic and clips.


I now have all the portholes replaced on the Starboard side and will start on the port side tomorrow.

The glass area is slightly smaller as these new windows have their own metal frame unlike the originals, small price to pay for better thermal quallity.


You may be wondering why the new portholes do not look as shiny as the old ones.  This is because they cannot be anodised to give the glossy shine as it destroys the thermal break.  Instead we had them powder coated a silver colour though in the photos it looks grey.

It will tske a bit of getting used to the new portholes but we are very pleased with the result.  Now to do the other side before the rains return.
at 11:56:00