We don't seem to have much luck at Audlum. We could not stop last time we passed through due to the historic Boat rally and last night we went back to the Shroppy Fly for a meal only to find out the kitchen was closed due to and electrical fault.  Unperturbed we walked into the village and had a super meal in the Lord Combermere.  As a bonus to make up for it they even served my favourite pint,  Shroppy Gold.

The weather seems to be at six's and Severn's at the moment as after yesterdays wet and miserable day, today dawned as bright as a spring day should.  We decided as the weather was perfect I would give the drone another flight and video the locks.  We walked up to the middle of the flight and my earlier assumption was correct as we found C&RT working on lock 10 and 11.

At lock 11 we found it had been drained and work well in hand getting it ready for the coming season. Its the first time Chris and I had seen the use of stop planks so stopped and had a good look.  We know what stop planks did but how they were deployed was new to us.  You can see the tarpolene being used to make the seal on the photo below 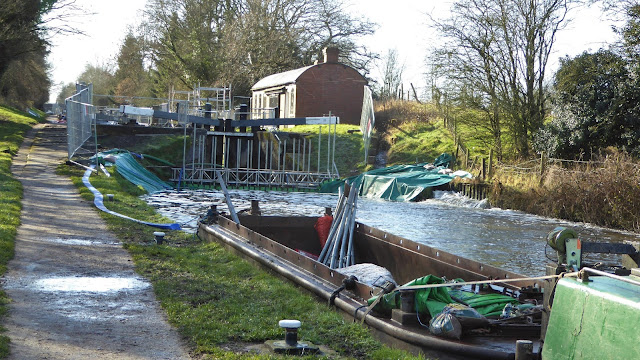 Once mid way I launched the drone and we walked back down all the while videoing the locks.  It was actually quite tricky to keep on course, watch the video feed and walk to follow it all at the same time so Chris became a spotter warning me if the drone got too close to the trees and giving directions to avoid them.


Once we reached the Shroppy Fly I packed everything up and we then wandered into the village.  St James Church looked resplendent in the morning sun and was a dominant feature of the village.  The church dates from the late 13th century with additions in the 19th century.  Interestingly the church is not recorded in the Domesday Book for some reason.

We paused for lunch in a very quirky cafe call the Priest house.  A wooden boarded room barely 12 feet by 9 feet, still with what looks like the alter serving as a counter, and tables along a wall of sweet Jars from floor to ceiling.  The food was good value and you could read one of many books from the shelves while you wait.  No we did not buy any sweets, Chris would not allow me to.

We got back to AmyJo at around 2pm and got underway straight away.  We passed Overwater marina and decided we would stop in the middle of nowwhere.  By now clouds were beginning to build up and a breeze was filling in.


Along the way we came across a flock of Canada Geese. All eyed us suspiciously as we passed. We thought we would nickname them Gongeeslers as they watched us until we were well past them.


As we came to Coole Pilate moorings we found that they were deserted as far as the eye could see so we moored there for the rest of the afternoon. By now the breeze had fizzled out so the temperature became quite pleasant in the sun and the clouds were beginning to disperse again.

The sunset this evening was superb and Chris managed to put her photography to good use to catch this great shot.  How she manages to take cracking shots like this I do not know. 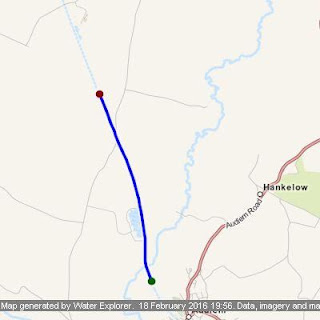