Audlum day 7 - A friend makes an improvement on the hire boat front at Bunbury.

Not much to post about yesterday.  The weather started off dull and proceeded to get duller and windier then finishing of wet with drizzle.

Up to now the rain held off but signs the wind was picking up appeared on the cut but it was still manageable.


We stopped off at Nantwich services to dispose of rubbish and top up the water.  The gent on the front of this boat decided he wanted to be a frozen scarecrow so stood on his boat roof as we passed pronouncing he was freezing up solid.  Seemed a happy sort of chap and was clearly enjoying his life :-)


Once again the visitors moorings were busy with boats and not a soul moored on the winter moorings out of town.


On the way to Barbridge we kept an eye open for Mow Cop but the drizzle that had now set in meant it was shrouded in the mist.  We think we got it in this photo but having never seen it we can't be sure.

The trip from Coole Pilate went without much to speak off and we wound up outside one of our favourite haunts, the Barbridge Inn for the night.  Of course Chris,  when asked if she wanted to cook or have a meal in the pub, naturally chose the latter.    We always enjoy the food here and have no complaints so far.

Now I've always wondered why Coole Pilate got its name.  According to Wikipeadia  Coole Pilate means a croft growing pill oats. A brine spring is shown on an 1831 map of the area, and is presumably the source of local place names such as "Brine Pit".

Little is known of the early history of the area. A square perforated stone hoe believed to date from the Bronze Age was found in a field to the west of Old Hall in 1936, suggesting possible settlement during that period. Coole Pilate is not mentioned by name in the Domesday survey.


Today the weather was not to good with rain from the onset but at least it felt a good deal warmer at 8C.  We set off about 10am and kept the observation deck (pram hood) up to shelter from the rain.

At our first locks, Bunbury Staircase, we met up with the new assistant manager of Anglo Welsh cruisers, Steve, a good friend of ours and stopped for a chat.   He has had a bit of a sort out of the boats and noticeable is the fact there is now room for boats to pass in opposite directions with the hire boats now only 2 boats deep instead of 3.  All it took was for him to re-arrange them by size to fit in better.  Not rocket science but hopefully will make things easier at the lock in future.

At Tilstone Lock we were just about to open the paddles to descend when nb Rosemary caught up.  We let them into the lock with us and we worked with them through Beaston Stone and Wharton lock but going single at Beaston Iron lock.

At 2pm, and despite the now steady rain, we decided to stay out one more night so stopped at the Shady Oak which is now becoming a popular haunt for both us and the moorers at Tattenhall.

Tomorrow we'll return to the Marina as Chris is back at work Monday but we'll be out and about again at Easter for a couple of weeks. 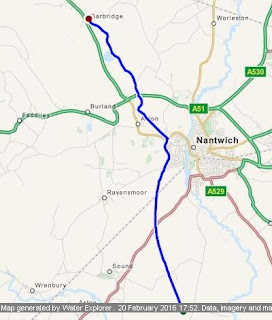 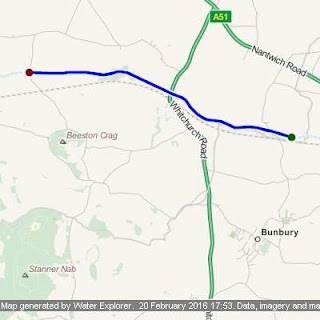