We woke at 8am this morning to a lovely warm cabin as the fire stayed in over night.  Outside a sharp frost and -1C did not look inviting but the sun was out in a cloudless bright blue sky.

We planned to stay on our mooring today and as the sun was quite bright I was looking forward to see how the solar panels would perform and they did not disappoint.  At midday we saw 99watts being generated and the battery charge go from 92% to 95% over the next few hours.  This  meant with the inverter and fridge running we were still getting a charge into the battery's as well.

After breakfast we set off to have a wander round the town.  We did this last time we were here in 2014 but for some reason this time the town felt different probably as we were more aware of our surroundings this time.  We also had more time on our hands to explore in more detail.

One thing Nantwich is renowned for on the waterways is the height of its embankment.  One does not see the true size of it from the canal.  Its only from the road below that its immensity becomes apparent.  Must have taken the navvies an age to build.

Following the street from the canal towards the town centre are these lovely Almshouses in Welsh row.  All 6 have been modernised giving double occupancy and are beautifully maintained.


Above the door is a shield and inscription.  Anyone up on their Latin?  Answer in the next post.


The houses in Nantwich are far from boring.  This particular house may have been a school perhaps with its own bell tower, certainly from the slats thats what it would appear to be.  Or was it a small church at some time I wonder?

Just before the town centre is what looks like a tutor beamed building housing the Cheshire Cat restaurant.  Looks like any other old building until one reads the plaques outside.  The one on the right reads

"Widows Almshouses"  Built in early 17th century as cottages.  Converted in 1676 to almshouses for 6 widows by sir Roger Wibraham, moved by the death of his wife and sons"

The second tells of structural repairs made by W.A.Schofield.  He saved the almhouses from deterioration and colapse and preserved them.  The work took 6 years and included the creation of the Cheshire Cat. 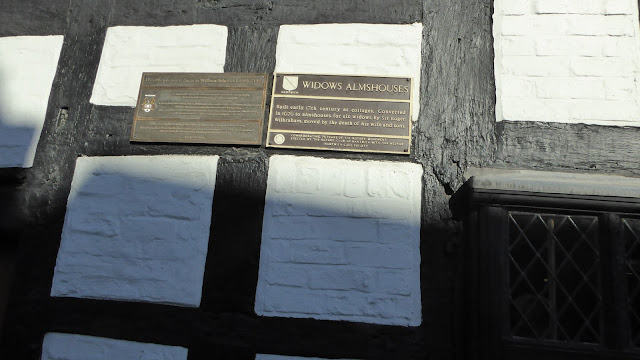 The town centre was bathed in sunshine but, unlike last time we were here the blooms are only just starting to grow, whilst the war memorial has now been restored completely. 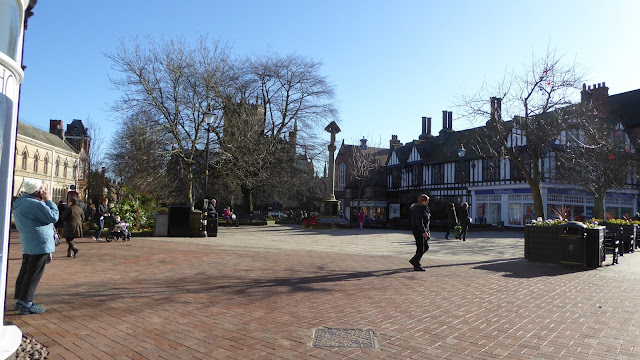 Down one of the side streets we came upon the Vine Inn pub.  As it was lunch time we decided to go in for a meal.  We can highly recommend the food here and for the real ale lovers like me there are several superb ales to slake your thirst .  Excellent value for money and I can reveal the burger tower is just that, a large tower.  Two home made 8oz burgers in a batch with salad and Chips.  Each burger was a good inch thick and topped with a rasher of smoked bacon and cheese.  It beat me!  It not often that happens!

Back at AmyJo, still bathed in sunshine, we took advantage of the near calm conditions and got the drone out.  This was the first time I got to use it fully and had it in the air for a good 20 minutes


With such a fine day we hoped to capture a great sunset but sadly whilst good, it just did not have much effect on the clouds that were now starting to appear

Tomorrow we plan to move on to Audlem  and winded below the bottom lock as they are closed still for repairs.  One issue might be the winding hole.  According to Pearsons its only 60 feet but Hutchinsons makes no mention that its under 70 feet so could be interesting.  Will be be able to wind or will we have to reverse back to Overwater Marina?  We see tomorrow
at 21:58:00

What a fantastic video of Nantwich. What a steady hand. What type of drone do you have. Jennifer nb Mactra's Filia

Hi Jennifer,
Thanks for stopping by. It was filmed using a Phantom 3 Pro drone. Its easy to fly and very stable so makes videoing quite steady.

Decent drone video that, I prefer the looking ahead views rather than the straight down ones and the last segment just above steerers position worked very well skimming along the canal.. More please .
Ade

Thanks Ade, got some more to process and will post soon