With overnight temperature dipping to -3C we woke to a bright morning and deliberated whether we could move due to ice.  The sun was out and again not a cloud in the sky. The cut where we were was free of ice so we figured if there was any it would be thin and would easily break up.

At 9am we got under way.  We knew a change in weather was coming and so wanted to get settled somewhere before the wind and rain forecast hit.

We should have stayed put as rounding the first bend we were met with a layer of thin ice.  A boat had passed 30 minutes before so we simply followed the path he had taken and the ice still broken.

Chris had been looking out for the 6 wooden sculptures shown on the plaque opposite Nantwich services.  The horse we had seen so kept and eye open for the others.  We spotted two but as one can see they are barely recognisable.  In fact one could not help thinking that perhaps a squirrel had been eating them, and I don't mean the 4 legged version.

A short way on and another sculpture.  This one could be two birds or two leaping fish.  Any ideas?


A long the way cats ice formed in sections sheltered from the wind and in places started to get fairly thick making a horrendous noise as it gave.  We did think we made a bad mistake at one point but as we got closer to Hack Green locks the ice was less frequent.

We arrived at Hack Green Locks expecting both locks to be against us as the boat that left earlier must have gone up them but surprisingly borth were in our favour.  By now the wind was increasing and clouds were forming.  We wanted to visit the not so secret secret bunker so decided to call it a day on the 48 hour moorings above the top lock and save Audlum for when this latest weather system had passed tomorrow.
We found a spot between two boats leaving ample room ahead and behind us for other boats to moor.  The tow path here, whilst soft, was not too muddy and we had rings to moor by.  As it was only 11.30 we had a welcome cuppa and an early lunch then set of for the bunker.


The entrance fee of £8.25 each was well worth it and I found the bunker extremely interesting.  More so than I thought I would.  It put the reality of what I had live with as a kid into context.  One is allowed to walk its corridors and a sequence of numbered rooms tell the story of the bunker,what life in each room was like and it's purpose.  All lit by gloomy light and with recorded tannoy messages to add to the atmosphere.

There are a number of communications rooms ranging from radio transmitting to a full telephone exchange to aircraft control rooms.  All set out with equipment of the cold war era

This room housed the British Telcom Emergency Communications Network E.C.N.  It consists of an advanced telephone and high speed teleprinter exchange.  The room was known as the Message Switch Exchange.


In each room a board gave a description of its use.  They even have a room in which they  reproduced a mock up of a Russian Missile launch centre complete with the twin launch key console.

The bunker house 130 civil servants working shifts 24/7 so there were dormitories for the staff.  In the female dormitory 18 beds and wardrobes were provided for their off watch rest.  The sign on the wall invited visitors to rest and sleep on the M.O.D. beds for a while.  Chris, being Chris, duly obliged.


Whilst all this was very interesting what really bought the cold war into focus for us was one room set out as a secure blast bunker complete with flickering lights, loud crackling radio sounds and every 5 minutes the simulation of a nuclear bomb going off nearby. Deafening and not for the faint hearted!

After saving the country from a nuclear holocaust we needed a coffee in the canteen to celebrate, together with "Secret Scones" peculiar to the bunker canteen.  I guess the secret was what was in them but they tasted OK.


The bunker was commissioned as a radar centre during WWWII and later expanded to provide a centre to run the region in the event of a nuclear war.  Out side remains a RADAR dish as a monument to the bunker's latter day use.


We both felt the bunker was worth a visit but through out, several doors were off limits and locked in the basement level. The bunker is now a branded tourist attraction and is decommissioned.  In the grounds next door is a new RAF building and hanger (in the background of the photo above)  Both fenced off and off limits to civilians.  Is it really fully decommissioned I wonder, or just dormant behind those locked areas?  My imagination getting the better of me perhaps. 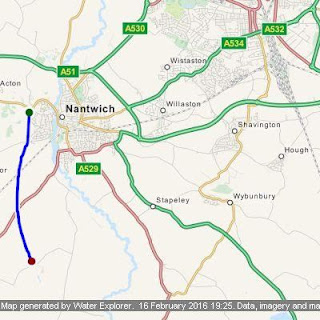 The reference to bikini probably relates to the nuclear testing at "Bikini Atol".

Thanks Robin I'd forgotten about that, you are probably right