Big trip home Days 11 - Late due to no internet.

Tuesday
I will try to continue blogging over the next few days but if we disappear of radar its because as we travel up the Shroppie the internet is getting weaker.

We had a really good night last night and despite being moored directly below the Bridge Inn we were not disturbed once. In fact after enjoying some Thatchers Gold last night it was 9am before we surfaced.

The journey from Brewood (pronounced Brewed) was an absolute delight. We could see why people love this canal as in places the scenery is stunning.

Whilst boring in its straightness the cuttings though tree lined woods and lovely bridges make this a joy to travel through, and, whilst being on the four counties ring boat traffic is much more in evidence now the schools are breaking up for the summer.

One such bridge we have passed under by car countless times on the A5 to and from Crick and we always said we would love to traverse it by boat. Today our wish was granted as we crossed the Stretton Aqueduct. The bridge is one of many built by Brindley's workers but now we can say we travelled it the way it was meant to be travelled.


Welcome relief from the now hot sun was to be had as we passed along Lapley wood cutting. The trees offering the traveller much shade. 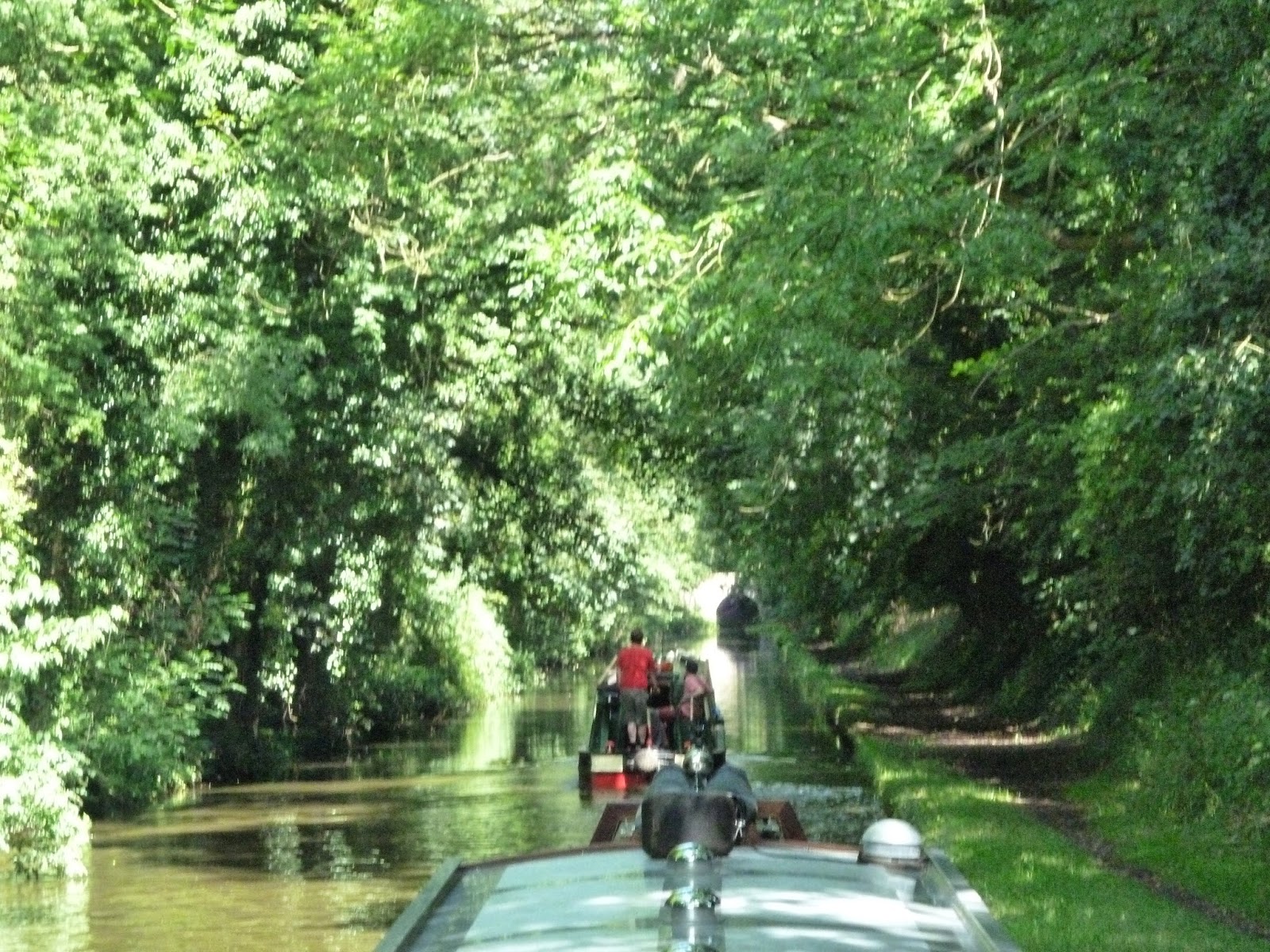 At Wheaton Aston we joined the queue for Wheaton Aston lock (our only one of the day) and were fifth in line. Here in full sun we sheltered best we could whilst conversing with the others waiting their turn. Chris now prefers to lock wheel as she finds it’s mostly the ladies that do this so has a great time nattering to them whilst they share the work turning the locks.  I don't mind queuing at locks as its a great time to meet other boat owners and hire crews.  Lot of good information can be gathered and the more experienced skippers of historic boats are only to pleased to impart their knowledge on to others.  I've learnt a lot queuing at locks on the Shroppie. 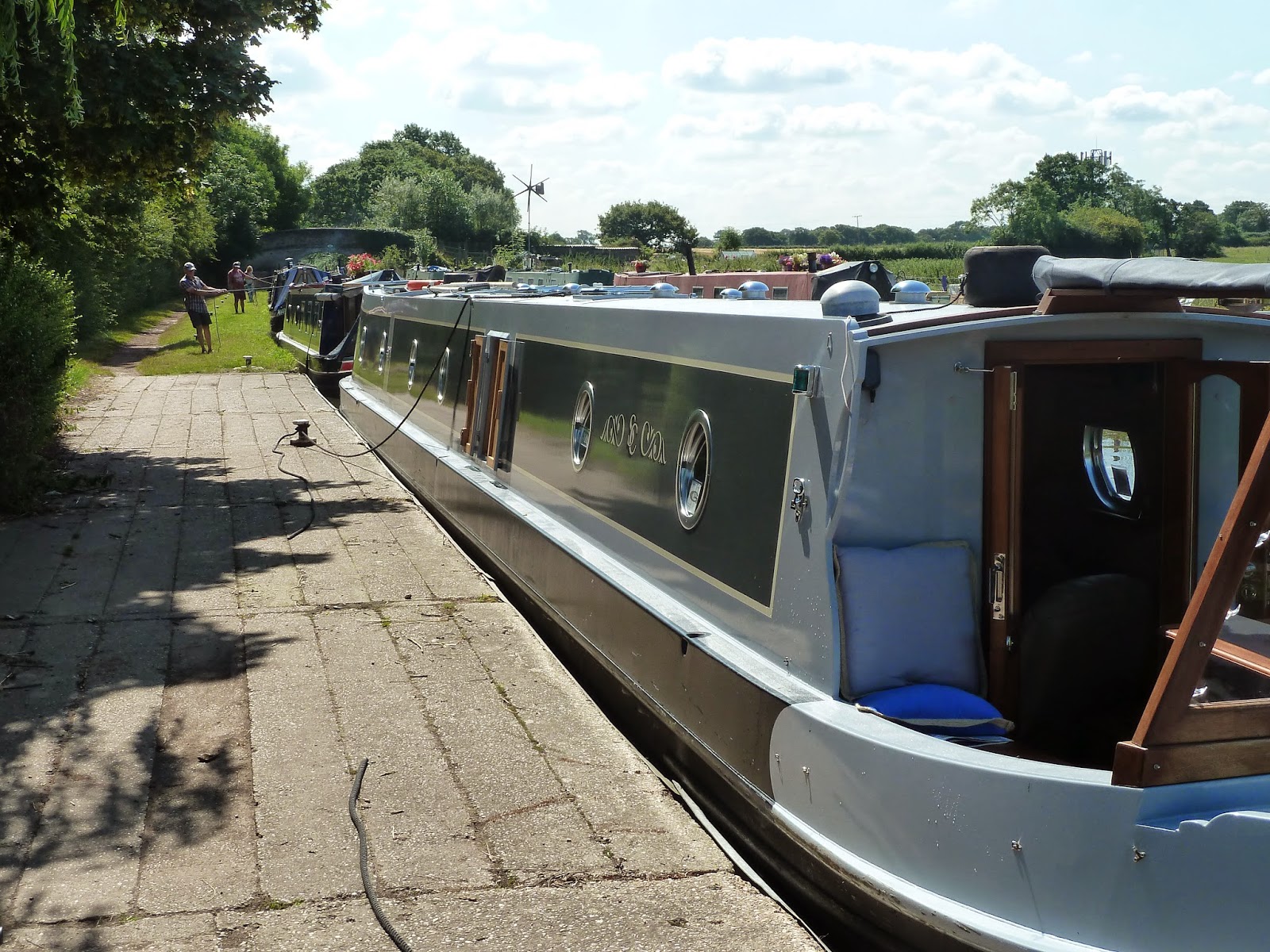 After the lock once again the canal continues in a relatively straight line with a few gentle bends until Cowley tunnel is reached, however, the views across the fields as one carries on remains as beautiful as ever. At 81 Yards long Cowley tunnel is probably no longer that the expanding M54 bridge we went under yesterday but still the fun of a tunnel remains.


By now it was so hot the heat was getting to us so we took the opportunity of grabbing the only free mooring in shade at Gnosall. Here we stopped for lunch on board and to cool down for an hour or so. We did not leave the boat to enjoy the coolness offered in the shade but it looks really pretty from where we were. We definitely want to explore this more next time. Whilst there the police training helicopter from Tern Hill nearby was doing some sort of exercise and buzzed round at low altitude shattering the serenity of our position


Tern Hill, home of 632 Volunteer Gliding Squadron, was a helicopter base but is now principally used as an outpost for the tri-service helicopter training establishment at RAF Shawbury. Training flights use the airfield (as do gliders at the weekends) but many of the buildings and some local Ministry of Defence housing (much of which was sold off) are now part of the army base known as Clive Barracks (after Robert Clive).

Chris found out its market day at Market Drayton on Wednesday so we pressed on further for a few more hours past Norbury junction and the junction pub packed to the gunwales with gongoozlers and boaters alike. The line of moored boats after the junction seemed to go on for miles.

After the junction we carried on a little further and entered the reputedly haunted Grub Street Cutting which, according to Pearsons, is supposedly haunted by a monkey like creature after a boatman died there in the 19th century. Despite this it’s a beautiful and quiet spot, cool and not the least spooky during the day but at night…. Early on in the cutting a double ached bridge marks the start of the main cutting (bridge 39) that gives one a better idea of the depth of the cutting. This bridge has, unusually, the remains of a telegraph pole in its upper arch. This, a survivor of days when telegraph poles followed the canal for much of its length. Modern technology now means these are now replaced with fibre optic cables buried beneath tow paths.

Leaving the cutting behind we found us a lovely spot by the Anchor pub. What a little gem of a pub it is too. Walking in through the door the bar is no more than 4 feet wide and the saloon the size of your average dining room. In fact the pub probably was at one time just a house its so small. The elderly bar maid only has two beers on tap to serve, Carlsburg or 6X. A delightful little place and beautifully kept beer.