Well today has been as hot, if not hotter, than the last few and boy did we wish for rain today.

We upped pins at 7.30am and moved all of a 100 feet onto the water point by Talbot wharf to take on water
Once full we moved of and after a while we came upon moorings with first, bloggers NB Sokai looking as though some paint work is being done to her and then much further on another very well known boat that used to be owned by the sadly missed Paul and Lynne. 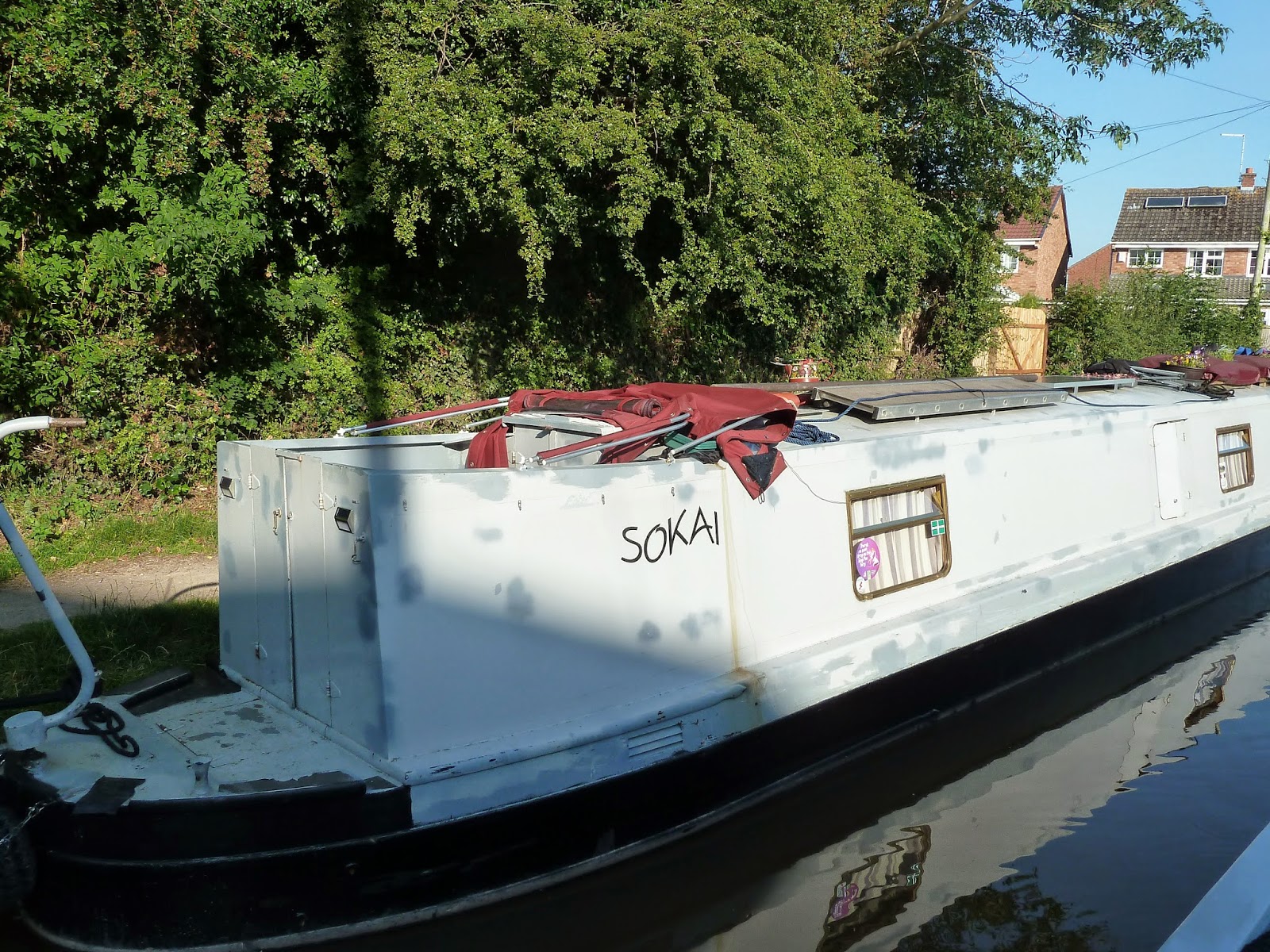 NB Piston Broke looking just as pristine as when Paul and Lynne had her.  Clearly her current owners have been looking after that engine Paul, it still shines as good as when you had it. 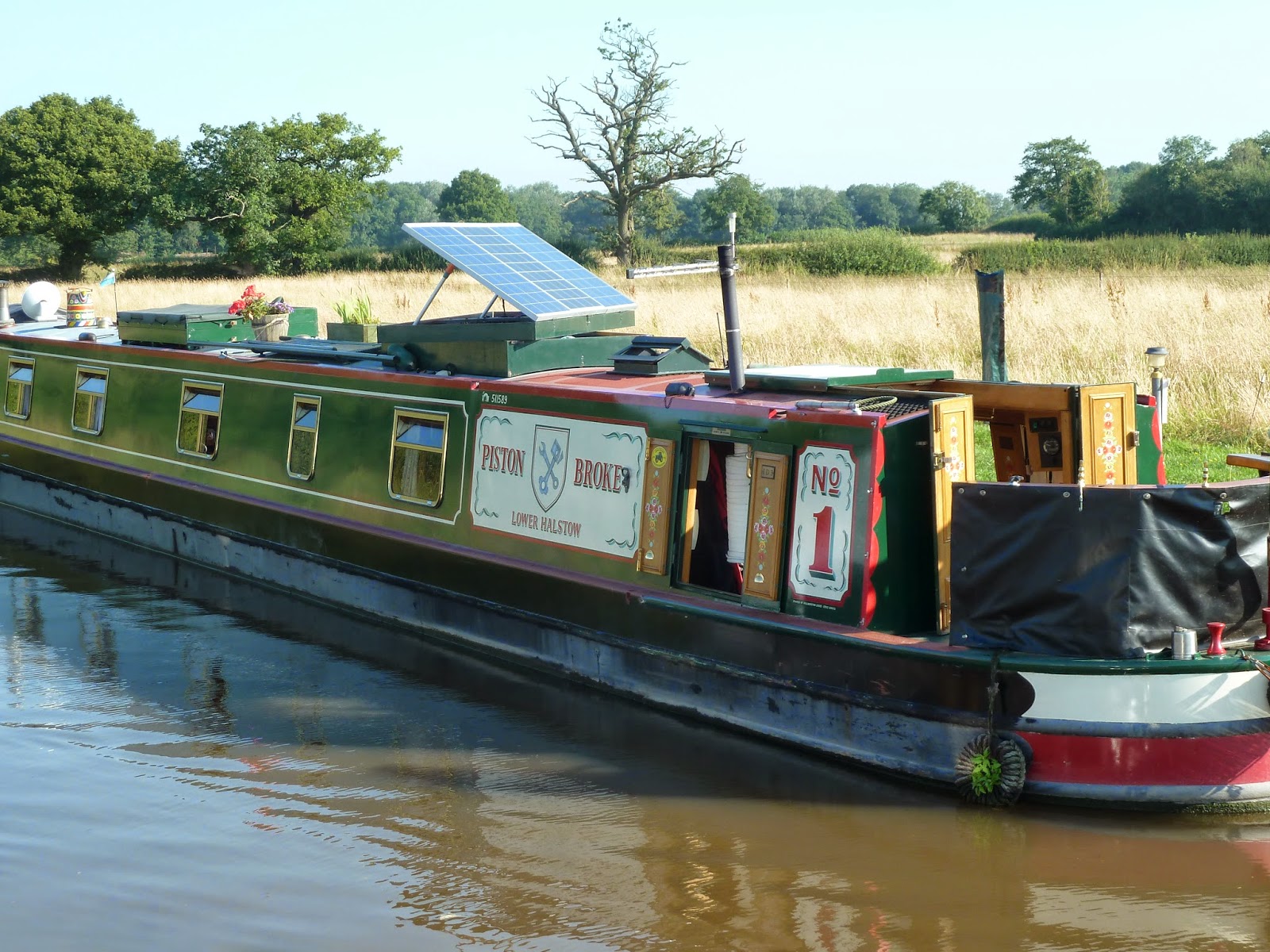 By now the sun was starting to heat the day and this part of the cut offers little in the way of shade.  What shade there was snapped up by any boat that got there first.  At Adderley locks we joined the procession of boats going down.  In front of us was working boat Sickle and support boat Chalice.  This meant all but one of the five locks had to be turned in our favour.  Only one boat coming up and the news at Audlum was not sounding good.

It was clear the historic transport festival would mean Audlum would be packed with boats and approaching the locks it was soon apparent mooring was out of the question. There was nothing for it but to continue on in the sweltering heat of the day. 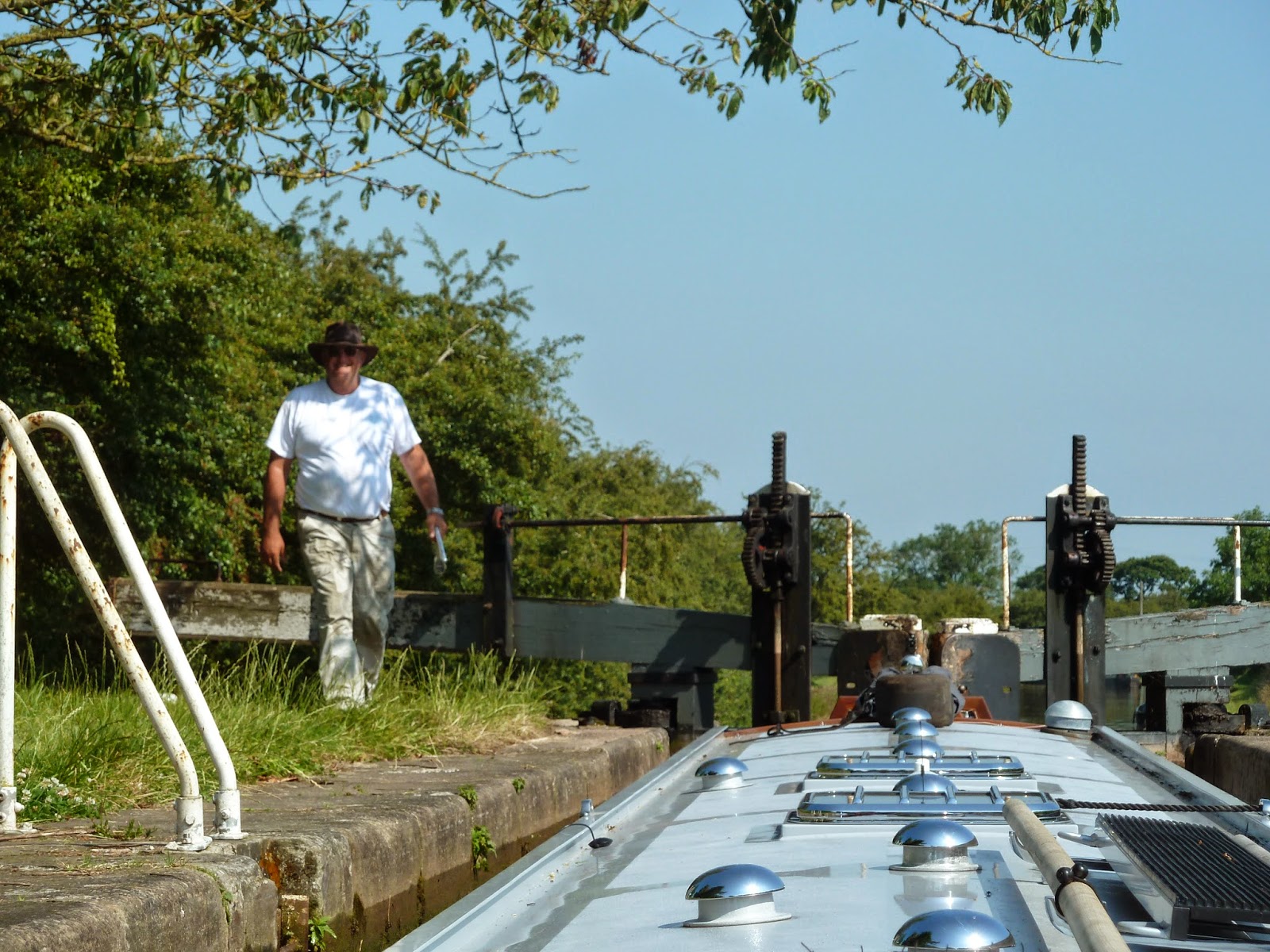 Normally we would shut all doors and side doors in locks but, the need to drink plenty of water we found keeping the galley side doors open we could just lean in and refresh our glass of water once in a new lock when ever we wanted, that way we did not de-hydrate as still there was little shade.

We had only got as low as lock 5 when troubles started.  Going was slow we found out because working boat Aquarius and butty Ilford were also descending but locking the old way which meant they were holding every one up above them.  Eventually Ilford stopped in the pound below lock 5 whilst Aquarius continued.  Just when things were about to get going again the boat coming up in lock 6 had its gearbox seize and was also now stuck in the pound with Ilford.

Largely thanks to the young boatman, David, on Challis turning the lower locks for us as he worked his boat down we made better progress from lock 6 down but no chance of a refresher at the Shroppie Fly today as the moorings were all packed out with Historic boats or reserved for them.


Finally we cleared the last lock.  Together with the Adderley locks Chris and I worked 20 locks of which 10 were against us, 5 were set for us by David and the rest in our favour with boats coming up. Phew!  We needed shade to cool down badly as we were both starting to feel the heat but, along this stretch and on past Overwater marina there simply is none.  Finally at Coole Pilate Halt enough was enough and we pulled over and simply flaked out until it cooled down.  We desperately need a shop tomorrow as the beer stocks are taking a serious hit tonight.

With every door open, the Houdini hatches wide open and all port hole glasses out it got to 29C inside.  Sticking ones head outside a side door was akin to sticking it into a blast furnace it got that hot this afternoon.  AmyJo's roof was hot enough to cook on at one point.

was lovely to see a picture of pistonbroke although Paul was a bit sad. We still look back with fond memories of our time on the cut but we are settled landlubbers now and it doesn't seem possible that we have been back on land a year. Glad to see that you are enjoying your boating. Lynne and Paul