Sunday
Today was going to be another long day as we set our goal to get to Braunston turn some 10 miles away. It was another 8.30am start and first order of the day was the climb up the Stockton locks. One drawback with early starts is not many boats are on the move and so after waiting a good while we decided we had to move on alone again (was it something I'd said?). 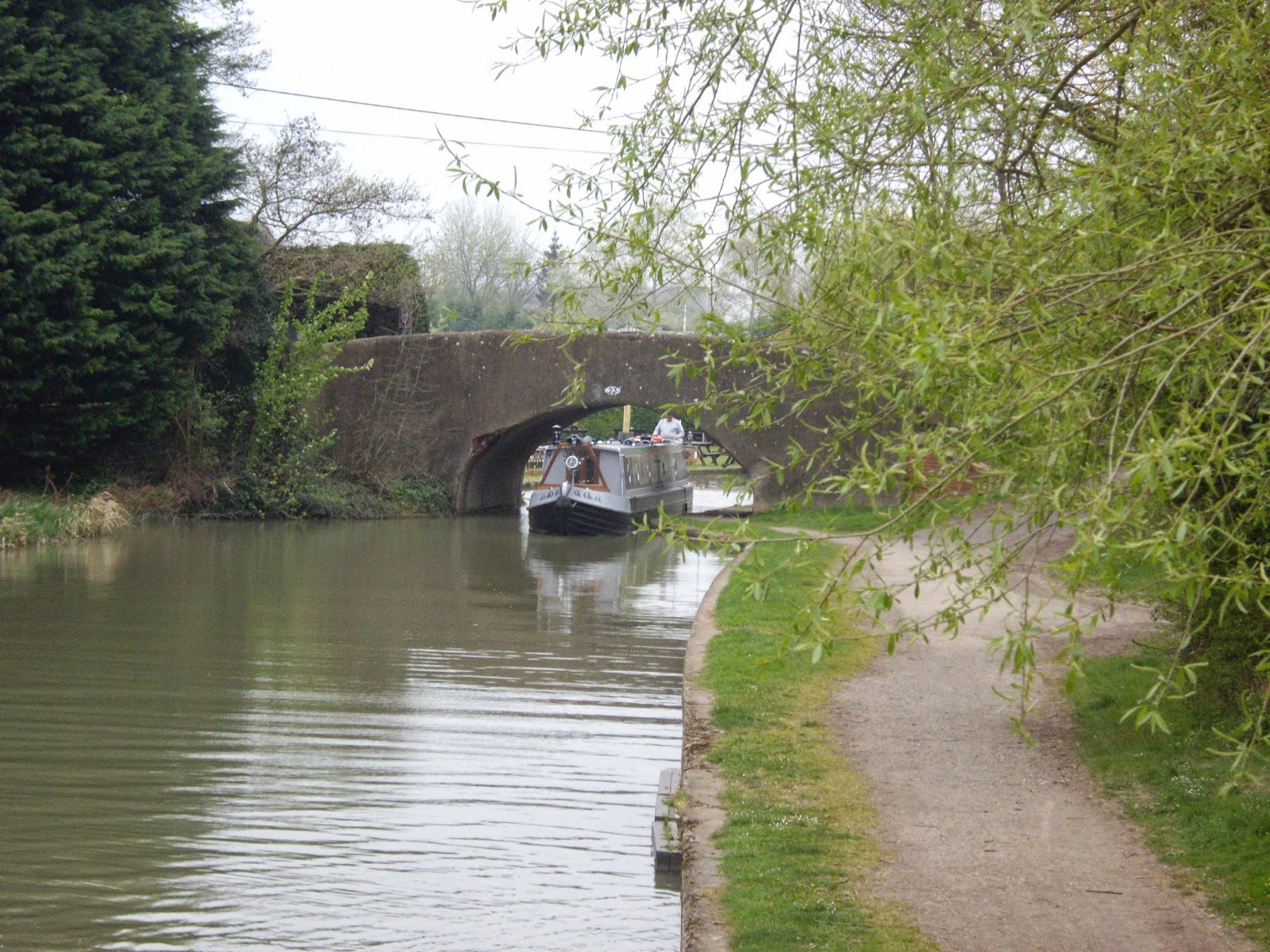 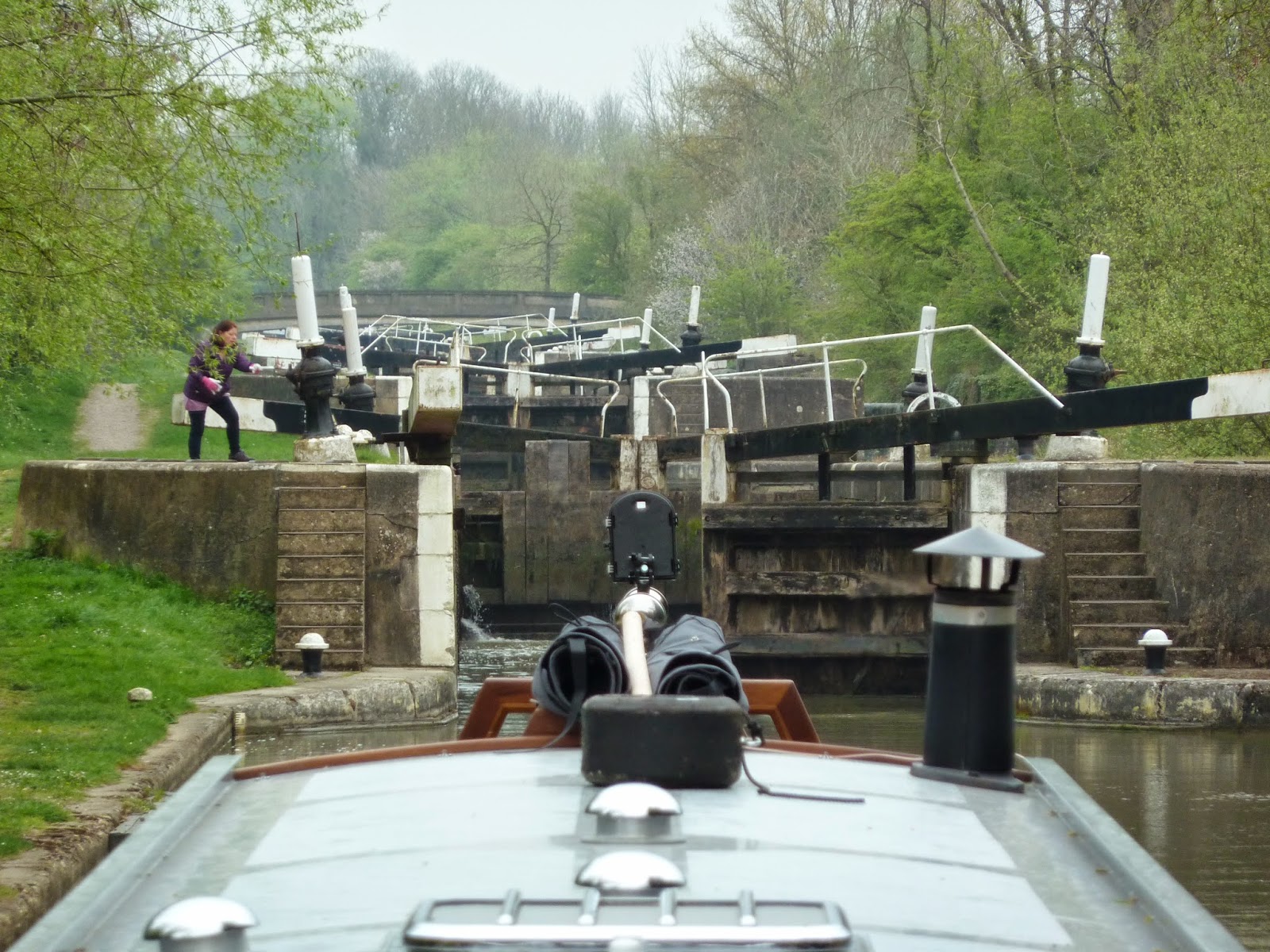 It was whilst ascending Stockton locks Chris and I found a new routine. Chris would set the lock and I’d take AmyJo in. Chris would then shut the lower gate and set the top paddles to fill the lock.  She would then go on ahead to set the next lock in our favour. I remembered reading Paul’s account on the Manly Ferry of single handing so when the lock was full I would lower the paddles, open the gate and slowly motor out putting AmyJo in reverse as she cleared the gate. I would nip off and shut the gate in time for AmyJo to reverse back to me and I could then motor into the next lock prepared for me by Chris.


We did this all the way up the 9 locks and it worked a treat, it also meant less lock wheeling for Chris. I admit the first few locks I really had to believe AmyJo would indeed return so I could board her and always remained ready to leap aboard if all went wrong, but she always did come back and the method worked a charm.


That’s when we hit another snag as we ascended to Lock 5. The pound above was completely empty and only a few inches of water remained. In order to proceed we had to fill the pound from the last top lock so we set both sets of paddles open and waited for the pound to fill. Luckily lock 4 is the top lock of the flight so the water levels above were hardly affected.

It took over 30 minutes to fill the pound so AmyJo could get to the next lock. By now another boat was waiting to come down so this meant the pound should rise a bit more. With all paddles and gates shut we can only assume leakage through the gates of lock 5 over night drained the pound.

It was an uneventful run though to Calcutt locks (going up this time of course) and on to Wigrams turn. We turned here and carried on toward Braunston turn. We did have a near miss at bridge 101. I’d slowed AmyJo right down and sounded the horn as we could not see through the bridge ‘ole and just as we started to enter another boat came towards us at speed. Luckily AmyJo stops quite quickly when going slowly and by both of us putting the boats hard astern we missed colliding by inches. The other boater apologised profusely and went on his way still at speed I might add.

We reached Braunston turn with Chris at the helm and as the moorings were nearly full we decided to carry on as there was still time left.

We made good time up Braunston locks using our new found locking method though by now the wind had picked up so we had to revert to the normal method for the last lock. The weather was turning cold and grey with signs of rain in the air so we decided to stop once clear of the locks 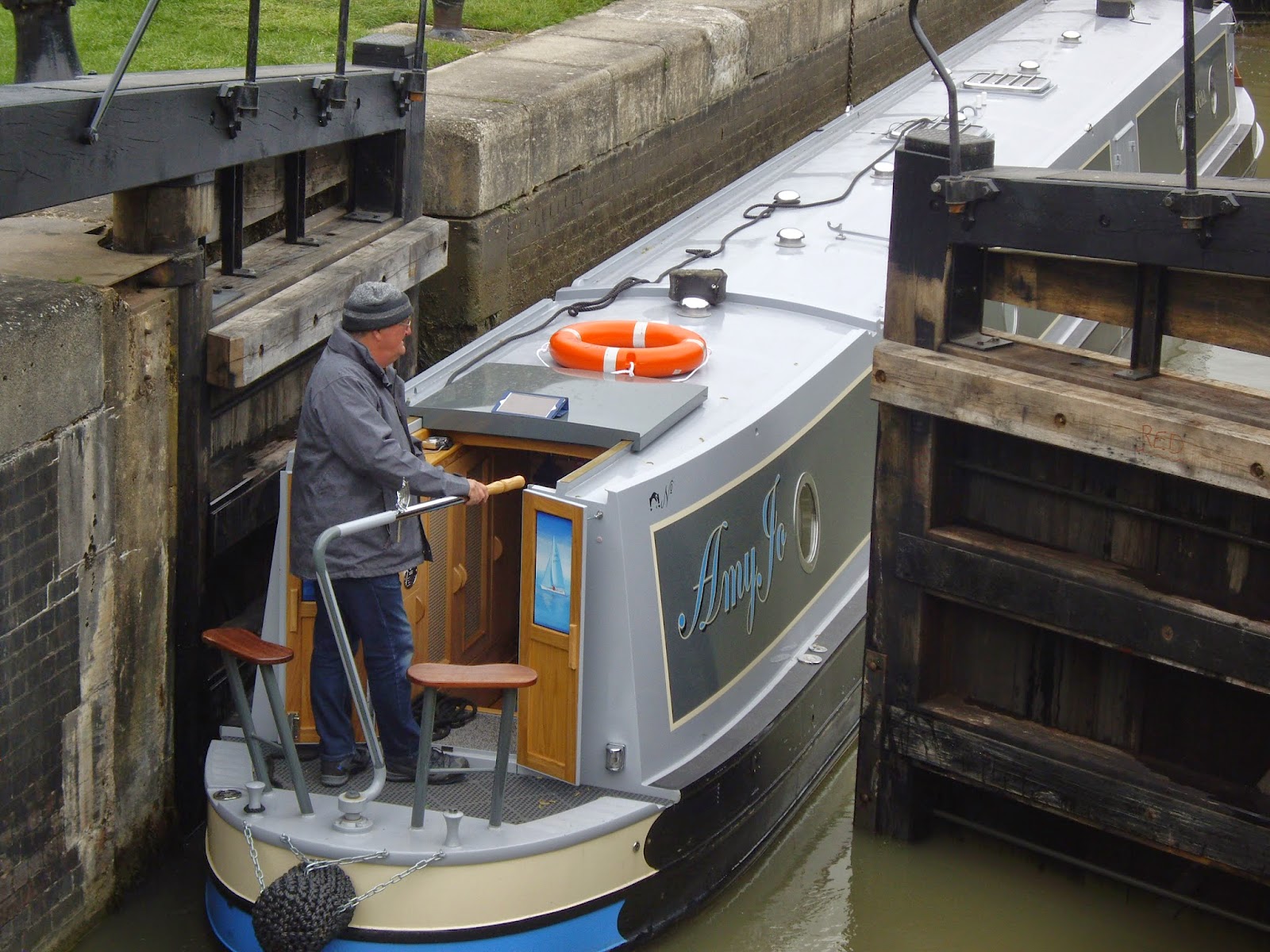 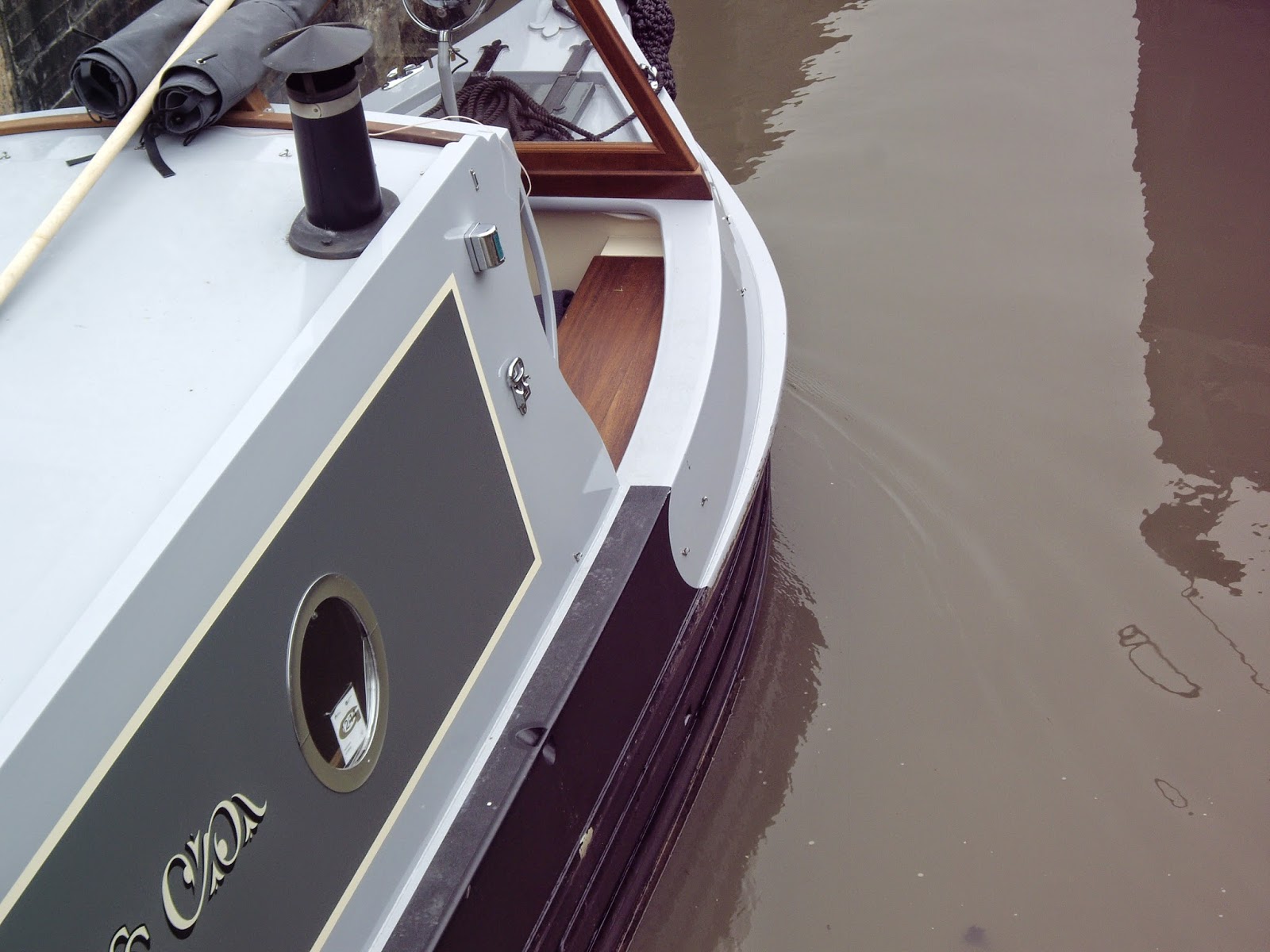 At the top we had had enough and taking the advise Keith from Hadar had given us to stop early so to get a mooring we decided to moor up at the 48hour moorings above the top lock.

We were just coming alongside the first, and only free mooring spot before the tunnel, when a highly polished working boat type with a abrupt voiced owner at the helm announced to his wife on the bow “damn it they have pinched my favourite mooring spot” and “Now we’ll just have no choice but to go on.” If looks could kill as he passed by I would have been dead 10 times over. He was ranting on whilst going into the lock and we overheard is wife retort “well there’s nothing we can do about it now is there!”.

What they did not realise was that their conversation, being done via by two way radios, just happened to be using the same frequency as ours and we could hear it all. Oh the temptation to have some fun was so overwhelming but I managed to desist in the interest of his poor suffering wife :-).

To make matters worse, for them I guess, a few minutes later  just as we had battened down for the evening the heavens opened and AmyJo got a thorough washing down. At this point I was glad I was not the wife of the previous gent whose favourite mooring we now sat on. We sat enjoying an evening tipple listening to the rain hammering on the cabin roof feeling so lucky we stopped when we did.

Glad it worked well for you, you get some odd looks from gongoozlers as they see the boat leaving without you, then amazement as it comes back to pick you up!
Paul

007 on the stealth boat who pinches other peoples moorings..... where are you heading... are you lost?

Paul,
Great fun and one almost made to jump aboard cos he thought I'd gone mad :-)

Tom,
I have a secret mooring homing device provided by Q shh... no one must know. :-)