Great day out at the Weaver Festival

Dark clouds loomed over Chester when we woke but the rain that has persisted on and off over Saturday had finally stopped. Normally we would go sailing on Sunday mornings but not this time. The River Weaver Festivial is on in Northwich and Chris and I wanted to go see. It was also an oppotunity to meet up with Keith and Jo on Hadar one last time before they head off back home.

We left Chester at a late 9.15am as we knew the festival did not start until 10am. We did not rush as we had all day but still made good time and got there at 9.50am. Lucky for us the car parks were still fairly empty and we managed to park close to the town centre. I think the rain had put most people off but as the morning wore on the clouds thinned and a large very bright UFO appeared through the clouds, the sun was trying to break through to brighten the day.

We were amazed at the sight that greeted us as we walked to the wharf between Hayhurst bridge and Town bridge. The whole area was a mass of narrow boats and barges, some of which had returned to the place they were built at Yarwoods yard. Every boat sported bunting from stem to stern and the whole place had that great atmospheric feel about it. 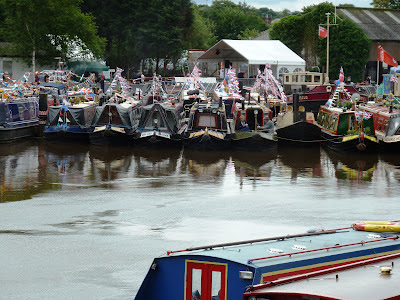 Boats and bunting made a fantastic sight 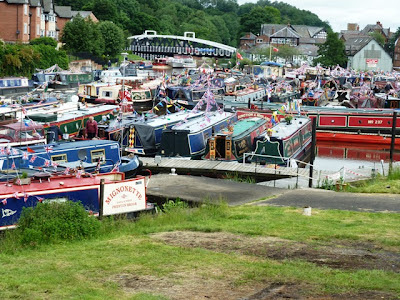 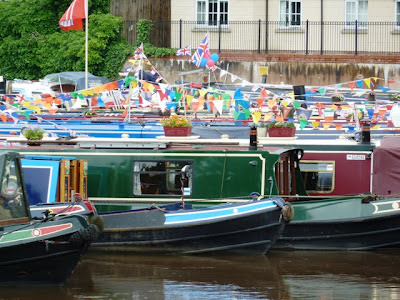 We wondered around the stalls for a while and Chris was taken with the Knot stall where we bought a dragon fly broach made entirely of knotted cord for her and an emergency braclet for me.  Sounds odd for a fella to have a bracelet but this one is made of 10 feet of very strong cord and can be un done quickly if needed. You never know when this might come in handy one day.

We managed to find Keith and Jo on Hadar and spent a good while nattering about their experience on the Llangollen canal, which they both enjoyed imensely, and we discussed all things boaty.  Hadar looked resplendant in her bunting and many passers by commented about the boat in Jubilee colours.  You may know Hadar is Red and Blue with white piping and I have to admit one can see why people thought of that.  I think Jo was rather please about their comments too. 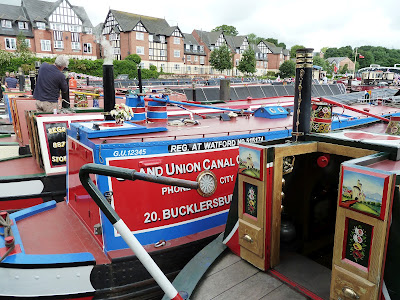 Hadar nestling among the work boats in her Jubilee colours 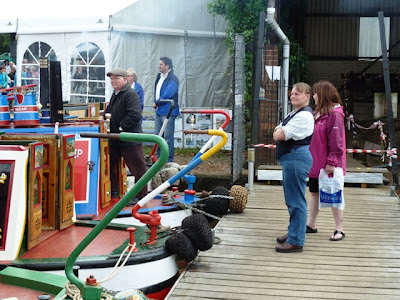 Chris, Joe and Keith's attention drawn to a boat leaving

Later in the morning some of the working boats took part in a parade along the river so moved out down stream ready to cruise past the festival.   As they left Duker boat Iris Abbott, a boat built by Isaac Pimblott & Co of Northwich in 1948, tried to head upstream but due to the rain the river had a good flow on it and as she tried to turn upstream her bows were forced back and she ended up across the river. 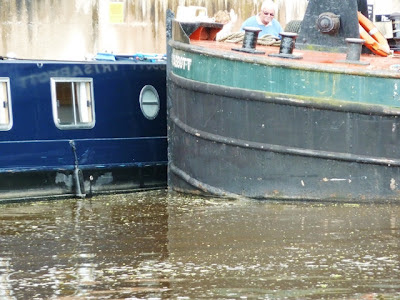 Expertly manoeuvred but millimetres to spare

Her crew tried hard to get her round but eventualy she got wedged between a narrowboat on the tow path side and the jetty.  I'm glad we were not on the narrownboat as you can see from the photo it must have been unnerving haveing a rather large bow gently coming to rest against your boat.  Fortunately no damage was done and Iris Abbott's crew quickly dragged her back onto the jetty.  Concidering her size that must have taken some effort.  She eventually tried again and this time got away.  Credit must go to her helm who did her best  with a strong current and managed to manouver Iris Abbott in a particularly tight area.  Not an easy task as you can see from the photos. 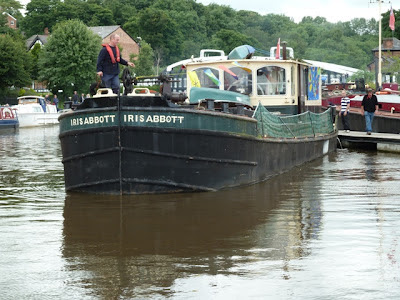 and away she goes
Chris and I then said our goodbys to Keith and Jo wishing them well and promising to stay in touch via the blogs and then we headed for the swing bridge.  We got there just in time for the parade of boats and as you can see from the photos we had the perfect view point.  I even manage to get some great video though I need to upload it to youtube first.  I'll post them later when I get chance 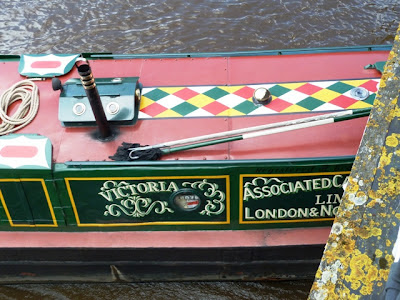 Coming out under the bridge

Unusual bow cabin on this boat 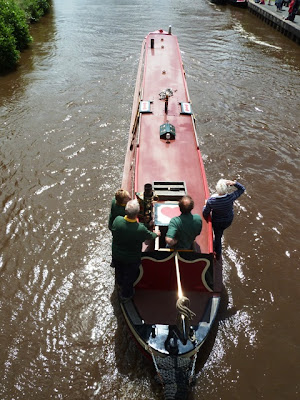 Nice shot from above as I had a good vantage point 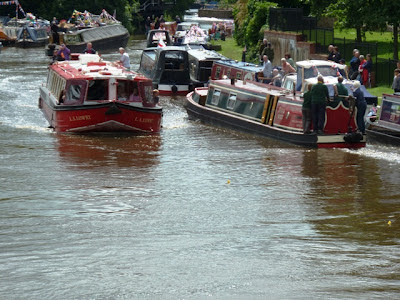 Not much room to pass 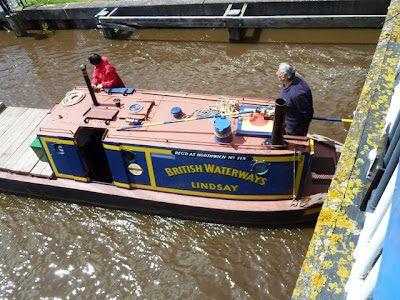 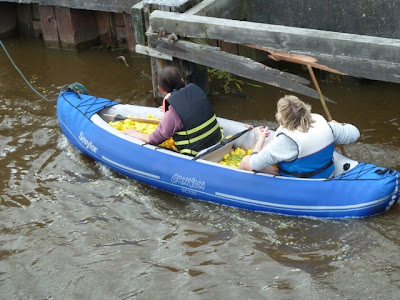 Collecting up the ducks from  the duck race 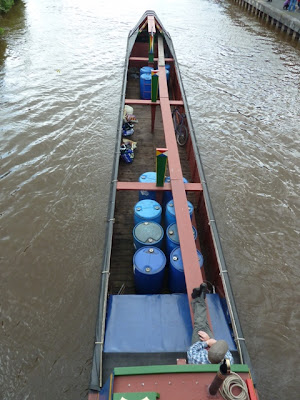 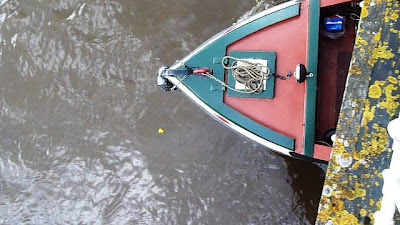 Peek a boo I'm coming through

Thank you for your not unkind comments about my work at the helm. Slightly miss judged the strength of the current, never mind the pressure of quite a lot of spectators. Didn't have a chance to apologise to the narrowboat we "nudged" I am sure we may have scared them a bit with big, heavy boat. Nice gathering. Best wishes.