Crick - Day 3 and the sun almost had its hat on

After the soaking on Sunday, yesterday, Monday, was much better with the sun making a warm appearance now and again.  With the sun out the temperature was much warmer than Sunday.


After a large breakfast Chris and I headed back to the marina and had a second look around "What a Lark".


Outside she looks stunning in the grey and red livery.  Ken's eye for perfection meant every coach line is as straight as an arrow.  Inside she is spacious as you would expect from a 70 foot boat.  Her interior light and airy.  I would post some photos but I did not manage to get the owner's permission before we left so out of courtesy I won't.  She also sports the excellent quality Ferwoods are becoming renowned for.  Now I've said this of other Fernwood boats but if AmyJo turns out like "What a Lark" we are going to be over the moon with her.


We had offered our help on the stand so spent much of the day with Julia and Mrs "Gone Bush", Mrs "Green Matters" and Mr & Mrs "Moment in time"  A light hearted way of remembering people used by many of the Ferwood boat owners.  So we have become known as Mr and Mrs AmyJo.

Later in the day we had chance to have another look round and yes, you guessed it the wallet got another hammering this time in the form of some universal stone polish to clean our UPVC windows, a pair of Regatta trainers each and a lightweight Regatta jacket for me.   Chris even found this material she really liked for the sofa and chairs. 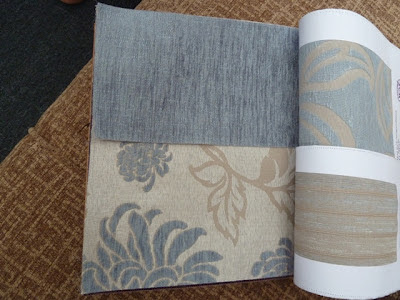 We had a lovely time at Crick this year and made many new friends as well.  It was lovely to talk to Ken and Julia again and we were given some news about the build ( but that's for another post)


As we were leaving we came about this unusual boat but access to the tiller was problematic as you had to literally crawl through a tunnel of cupboards to get to it. All you have is 3 feet headroom! 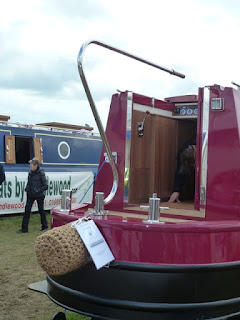