Hi folks
Today dawned with the sun and lovely temperatures.  It was Alan and Katherine's turn to manage the boat today and their helming improving with every minute.  After getting a few groceriesand the Daily Express in the local Co-op we left Rishton at 9am and headed for the locks in Blackburn.  After the detritus in Burlney, Blackburn was quite a surprise.  The canal and tow path were well kept with only the occasional graffiti. Just before the locks we stopped to pick up some extra shopping in a canalside Asda.  Looking at the mooring you would not think we were in the middle of Blackburn. 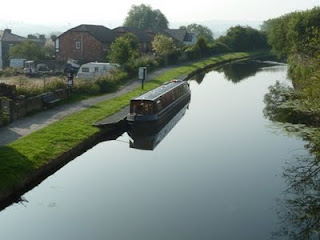 The locks in Blackburn were not in good condition and some of the gate paddles were slipping gears or were are tagged out of order.  Whilst this slowed our pace we still made good time through the city .  Catherine discovered she could stand on the boat roof and lasso the central bollards,   After two locks she became quite deft at  it.  Progress was not helped by the two idiots in Stargaser that had rammed us last night and now were ahead of us, leaving a paddle open whilst descending the 3rd lock flooding the British Waterways building and nearly emptying the pound

Slowly we left Blackburn behind and passed through a stretch of canal that reminded me of parts of the river Thames with lovely waterside gardens and leafy stretches andthrough here we even managed bacon, sausage, mushroom and onion batches underway. 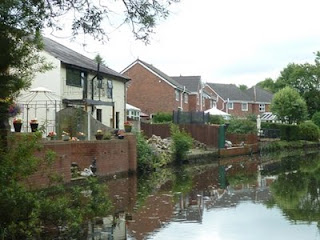 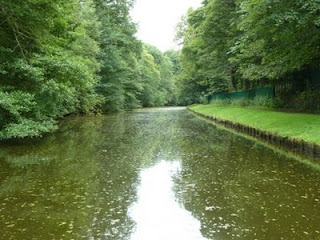 We are now moored just Wigan side of Bridge 91a at Riley Green and looking forward to trying out the local pub for a meal, recommended by several people along the way here.  Hopefully all being well we hope to make Wigan top lock tomorrow and traverse them on Saturday.  Trouble is we have to turn back on Saturday so it's going to be a grueling day going down and then up them.  Still it will be well worth it.  I doubt we'll ever get a chance again for some time.
at 16:04:00

Hi Steve and Chris, I am enjoying your photos of this stretch of the Leeds to Liverpool as we haven't reached this section on out 2 holidays on it. The boat build continues but as its a 70' we won't be there on ours again, we plan to cycle some more of it int he future, or even do a boat swap.
Keep up your energy levels!!!
Lisa