Having discovered yesterday that one of our domestic batteries has died we did our best to conserve what power we had.  I ran the engine for a while whilst Chris baked some very yummy Vodka and Orange cakes that we later shared with Richard and Sharon (nb Oakapple) and Linda (nb Kanbedun again) in the late afternoon sat out on the tow path until the midges got the better of us so we took refuge back on the boats.

This morning we planned to cruise the last leg of the Weaver but one obstacle stood in our way.  New Bridge, is shown in the Pearsons as having head room of 6ft 4ins.  We walked to it last night to find the height gauge showing 2m clearance.  Back at AmyJo we got the tape measure out and to the top of the new top box was roughly 1.9m.  It was going to be tight.

Richard very kindly offered to give us a ride on Oakapple if we could not get AmyJo through as they too wanted to do the trip but were concerned about running aground in the flash.  At least travelling together one can help the other if we went aground.
We set off at 10am as arranged and Richard and Sharon followed.

The run down to New bridge was straight forward with no wind and the sun trying to peek through the light cloud.  When the bridge appeared I slowed AmyJo to almost a stop and drifted up to the bridge.  Would she go under?  The height gauge showed the same level so we inched forward very slowly.

First the horn went under with six inches to spare.  This meant it was touch and go for the top box.  Inch by inch the bridge beam  got closer to the box.  With just 2 inches spare we eventually cleared the bridge.


From here on in the skyline was dominated by the salt works.  I did hear this works provides nearly 90% of all salt spread on Britain's roads.  Its easy to see why with endless mountains of salt lining the banks.


The local pub, the Red Lion had been staging a music festival all weekend and the stage was right on the canal side.  We could just hear the music on the wind last night but was deserted as we passed.

The Red Lion is to the left of the bridge shown below.  The bridge also marks the end of C&RT's jurisdiction and lock keeper Mo had warned us we would be on our own if we ran aground.  We knew we would be OK as Mike, one of our mooring neighbours in our marina, used to be based in these parts and had given me good advise on how to proceed.


From here the river does narrow somewhat so winding is no longer an option.  Once past the bridge one is committed.  A few pleasant turns and Winsford flash comes into view around the corner.

Mike's advise here was to keep left and wind in front of the moored boats and was spot on.  This we both did and did not run aground.

Once facing the opposite way a small cutting off to Starboard presents itself.  Here new staging and a water tap could be found.  The moorings look quite nice but I do not know what it would be like to stay overnight as the nearby grounds are littered with empty beer cans and other detritus.  Though it has to be said the moorings were clean.


Both the Oakapples, and us, needed water so we pulled in and breasted up to top up both tanks while the sun made a welcome appearance making it quite warm.  Whilst filling up the decision to celebrate with a drink in the Red Lion was made.


We still had to negotiate New Bridge but even with more confidence we did not rush but  took it just as carefully in case the levels had risen due to the locks being worked.

So now with a bit of charge in the batteries we are settled for the night. Tomorrow we'll head downstream to Anderton ready to go on the lift for Wednesday.  We may have to call into one of the marinas there see what can be done about the dead battery.

We just this minute got a text from C&RT warning that Wardle lock is closed due to a sunken vessel in the lock.  We do hope the crew are safe and unharmed and that the lock is working by time we get there or our return home may be delayed. 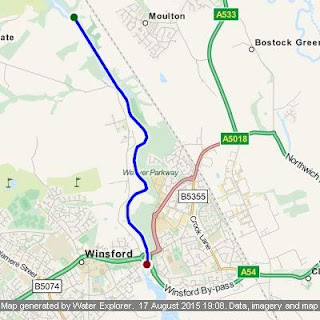 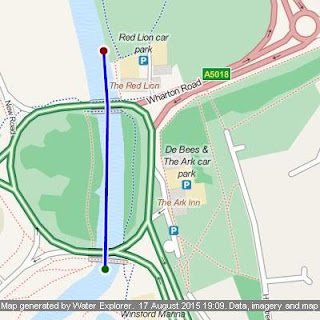 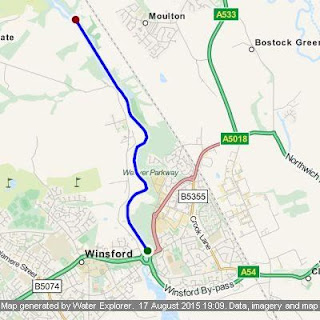 I hope you have disconnect the defective battery from the bank otherwise it will be destroying the remaining batteries!