Today was our day to move again.

We breakfasted and then got AmyJo ready for the off.  We upped pins about 10am and ambled along the river taking it easy as theres no rush.  This area is so delightful it was nice to go really slow and take it all in, besides there are very few boats here and none on the move yet.


One thing I like about the Weaver is it always has something to see around the next bend.  This magnificent railway bridge spanned the river about a mile or two after we got under way.

We knew Dutton's lock was coming up soon and sure enough in about a mile it came into view.  As there was a water point below it we wanted to pull in to top up.  It was a tight fit as another boat had moored on the landing overnight but there was just enough room to squeeze AmyJo onto the water point.

Whilst the tank was filling Chris went of in search of the lock keeper.  He informed her he was waiting for a boat to come down and then we could go up.  After about 30mins there was no sign of the boat so he phoned them.  Seems they had rung the wrong lock and were not due here after all.  With that the locky turned the lock in our favour and we entered in together with the other boat.

On exiting the lock one passes one of the River Weaver's famous wrecks, the MV Chica, looking a sorry sight nowadays. 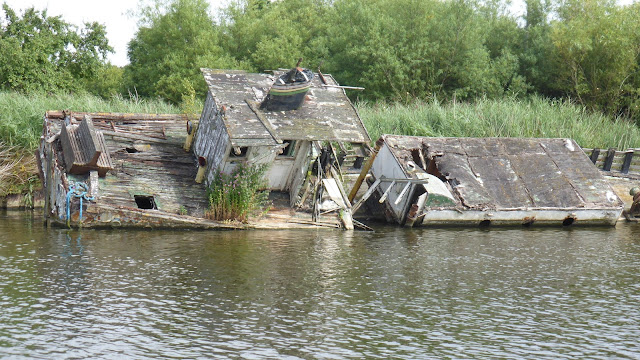 This wreck has some fascinating history and started life in 1894 as a cargo barge in Norway and was commandeered by the German Navy during the occupation of Norway in WW2.   After the war she found herself running guns in the Mediterranean then finally smuggling cigarettes and tobacco across the straights of Gibralter only to find herself as part of the fishing fleet in Liverpool bay in 1950.  In 1981 she was bought by a businessman to run cruises up and down the river Weaver but during a period of inactivity in 1993 she started taking on water, with nobody onboard to operate the bilge pumps she listed and her fate was sealed and she has not moved since and can still be seen sticking out of the water having become part of the scenery.

Leaving Dutton Lock behind we cruised in solitude through the countryside.  I admit to being slightly selfish and enjoyed not having to dodge boats coming the other way.  This sure is a great place to get away from the "madning crowds".  Bit like a larger version of the Monty but on a grand scale.

Another mile and we found ourselves at Acton Bridge.  We had planned to stop overnight here but the noise from the traffic on the A49 would have meant a disturbed nights sleep.  Instead we settled for lunch in the Leigh Arms just on the far side of the bridge.  Moorings here are good and we can thoroughly recommend the food here.  Portion sizes are such that even I could not partake of a desert!

Ahead lay Saltersford locks so after returning to AmyJo I called ahead to book us through.   Ian the lock keeper gave me the all clear and I let him know we would be there in 30 minutes.

Shortly after that we passed one of many side cuts leading to sluices.  This one had a lovely wooden bridge across it 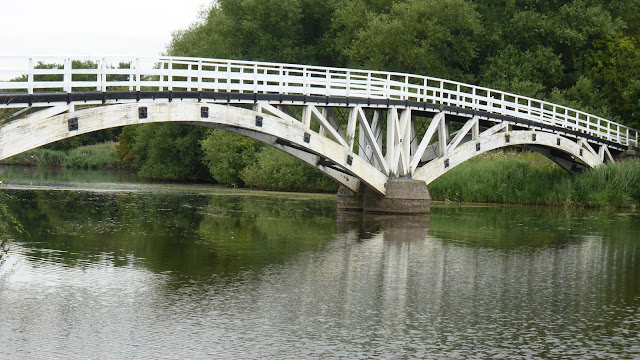 On our way to the lock we passed nb Jo's Delight and her crew asked if we intended to ascend the lock.  When we told them we did they asked to join us which we accepted so they then followed us up to the lock.

When we approached the lock it was ready for us so we motored straight in with Jo's Delight mooring in front.  As big as these locks are the water flow into them is quite gentle so it was just a case of handing Ian, the lock keeper, the warp and holding onto it as the lock filled.  The old railway semaphores are no longer used but were intended to signal which chamber a boat should use and when to enter.

A short distance after the lock we came across Barnton Moorings which looked tempting so we pulled in for the night.

We're not sure what we'll do tomorrow as the forecast is horrid.  Heavy rain is on the cards so we may just hunker down and chill  but for now its quite calm and our setting beautiful so we'll enjoy the evening with a bottle of vino calapso. 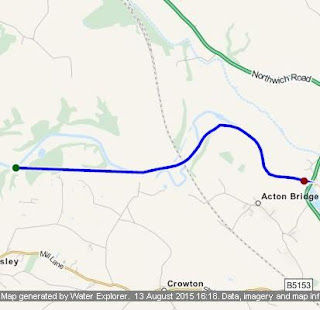 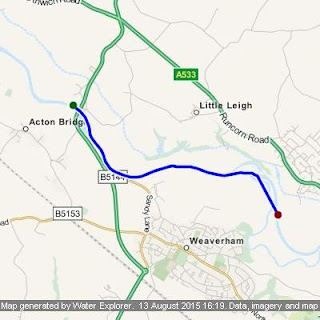