Neither of us slept well last night.

Maybe it was the thought of the day ahead that played on our minds.  When we mentioned it to anyone we always got the reply "Oh your brave!"  Would the weather be bad, and would there be plenty of shipping going up and down the canal.  All this in between cat naps.  Morning could not come soon enough.  Had we got everything ready, would AmyJo get us there, thoughts of our coolant issue re-surfaced.

We need not have worried as it seems the gods favoured us as the morning dawned bright and windless.  I busied myself checking the engine and making sure all was stowed,  anchor attached and fenders at the ready.

I then phoned Eastham control to ask if I could check the VHF radio and all was well but the controller had no record of our passage and no way would he allow us onto the canal without his paper work from the duty manager.  I assured him I had a letter of confirmation giving permission for the trip and he then promised to ring me back.  A tense 15 minutes passed before he rang back to say he had found the paperwork.  I then called C&RT to be told the lower lock was ready for us.  Finally I rang the council to confirm they would be present to swing the bridge.

At 9:45 we slipped the mooring and edged round to the lock just as the council guys were getting the bridge ready to swing.  I waited with AmyJo just outside the lock until the bridge was clear then entered the lock.  Our good friend Lorraine was there and she helped Chris work the lock.  The lock was full of algae and rubbish but as luck was with us nothing ended up round the prop.

The lock level dropped slowly to the Shipping canal and the gates swung open.  I managed to get AmyJo's stern to the wall so Chris could get back on board, however she had to get on via the roof very carefully.

I called Eastham on the VHF and was given the go ahead to proceed plus, much to our relief, we were inform no shipping movements were planned until tonight.  Our luck carried further as we swung out onto a mill pond of the Shipping canal, flat calm and barely a ripple on it.

Tentatively I opened AmyJo's throttle to 1700 RPM and she instantly came alive.  AmyJo clearly liked the deep water for she surged ahead at 5 knots effortlessly.  Her helm smooth and light unlike when on the shallow canals.  We could not believe our good fortune and the run up to Weston Marsh lock went without hitch.  After all the worry the trip actually felt anti climatic but we revelled in the experience all the same.

Next Stanlow refinery hove into view and it was time to report our position to Eastham control.  I called in but only got mush for response.  I then phone them to be told they had replied to me.  Seems our VHF is only good for very short range, an expensive waste of money, so the mobile phone had to be used from then on.

After Stanlow the canal runs fairly straight towards Runcon.  There is not much to see as high sided banks protect it. AmyJo happily glided through the water, made good progress and never missed a beat.  There were numerous geese that squawked and flew off as we approached 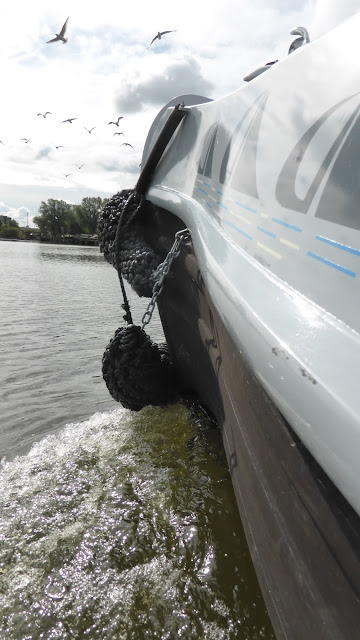 After an hour and a half our goal was coming into view.  The ICI refinery seems to block ones way but in fact the canal swings left and our destination, Weston Marsh Locks, is off to the right.


Finally the lock hove into view and we were pleased to find the lock was open and ready for us, so once we rounded the port and Starboard marks we made our way into the lock.

Once in the lock we were greeted by two cheerful C&RT lockies one, Mo, turned out to be the team leader for the river staff.  He was a mine of information and happily gave us information on mooring places and water points.


Braced for the surge of boiling water as the paddle opened we were amazed at how gentle the lock level rose the full 2 feet 4 inches to the river level.  That was it, we had traversed our small section of the Shipping canal safely and were now heading out onto the river Weaver but we could not celebrate just yet.  We still had to find a mooring.  Mo had advised us a good place to stop was the Devil's Garden some 40 minutes distant so of we went in search of it.


This section of the river is somewhat industrial as one runs alongside the ICI plant.  The overhead cloud added to the gloominess of the scene.  Not long after entering the river we come across the M56 skyway bridge high up above us. 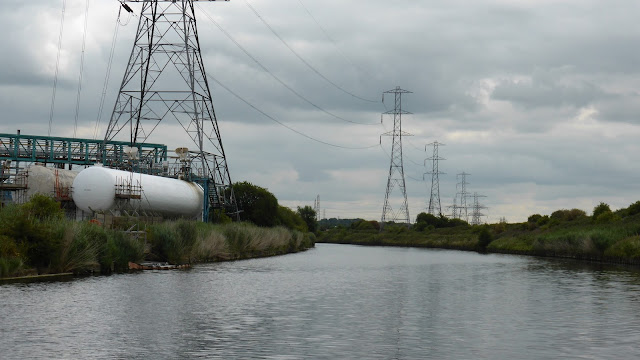 Signs the scenery will improve appear as one cruises past the Runcorn Rowing Club just before the bridge.  We intended to stop on the public moorings just before the club so pulled into a nicely manicured section of the bank believing this was the moorings only to discover the Pearson's has them on the wrong side of the club and they were in fact upstream of the club not downstream as printed.

Three bridges in close succession span the river herabouts.  A water point is located between them so we winded AmyJo and reversed onto it to top up.

Once clear of the hustle and bustle of the bridges rush hour traffic things calm down and one finds oneself in delightful tree  lined section of the river.  After a while we took the Pearson guide's advise, killed the engine and drifted along.  Not a sound could be heard except bird call.  So peaceful it was it was a shame to restart the engine again.


Finally we found our mooring for the night, Devil's garden, moored up and  then felt a real sense of achievement and thanked our lucky stars for such a great trip.  Despite all my research on the tinterweb I cannot find out why this place is called Devil's Garden.  Anyone?


The late afternoon was warm and bathed in sunshine so we got out the chairs and sat out on the bank.  Whilst enjoying the peace this little chap put in an appearance and proceeded to fish right across from us on the other bank for a full 30 minutes.  We managed to capture a few shots and these are the best we could get from them.


We have plenty of time on our hands so tomorrow will be a rest day.  Weather permitting I hope to get a bit more done on the roof box and a few other jobs done around AmyJo then Wednesday we'll continue the cruise up river. 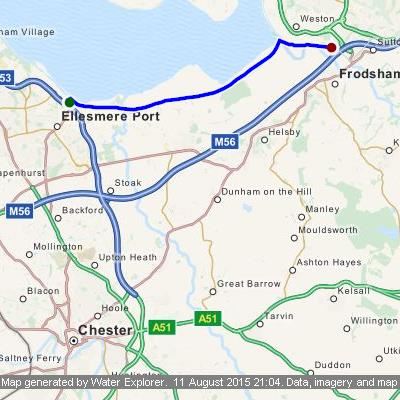 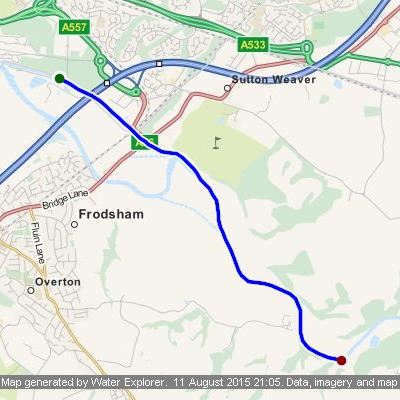 Hi we are at the moment moored at Northwich ,hope we will be able to meet up ,maybe we could arrange something .not as brave as you we came via the boat lift .
Richard and sharon nb oakapple ( we met you last year at your marina )

Hi Sharon
Really sorry did not recognise your surname.
we're on the Weaver for at least a week so sure we'll meet up at some Point. Look forward to a catch up with you

Well done! Not many boaters can claim to have completed that voyage

Good on ya, nice trip.

Well done! Glad you had such lovely weather too.
Debby and Dave

It's a great trip, isn't it? Funnily enough, our VHF was fine from Weston Marsh lock, but didn't seem to be able to get through from Ellesmere Port! I wonder if it just depends what happens to be between you at the time.