Despite being near the salt works that are worked 24/7 we had a surprisingly quite night so we both slept well.

We rose at our usual time of 8.30am and prepared AmyJo for her trip up the lift.  Chris tidied through inside as today AmyJo was taking on 4 new recruits for the day so the boat had to be clean and tidy.  Meanwhile I cleared the well deck and packed away as much as I could into the bow lockers to give more room to sit out then prepared AmyJo for cruising.

We were booked on for 12:50 so had been told to be on the holding pontoon at 12:20.  At 12:10 we cast off and moved the short distance to the holding jetty.  Here AmyJo's new recruits in the form of Corinna,  her hubby Andy, and their two little boys Lucas and Nathan joined us.  Corinna works with Chris and her 4 year old Lucas really wanted to ride up in the lift.  As they live nearby Chris arranged for them to join us for the trip as a treat for him.

Once everyone was aboard a lock keeper informed me that when the two boats come out onto the river from the lift we could move into the caisson that was waiting to receive AmyJo.


We had to wait in the caisson for some time while two boats entered the other one above us.  The lock keeper apologised for the wait adding the other boaters were a bit slow getting ready and into their caisson.  We said we did not mind and this gave us the opportunity for a little photo shoot.


Finally with a very slight judder the lift started to lift us up.  The slow movement is so smooth and surprisingly quiet.  The views as we got to the top were stunning.

Once we reached the summit the doors were released and we moved out onto the holding trough high above the ground.  This holding area has a second gate at its exit to stop the canal draining away if the lift has a severe leak or maintenance work is required.  Its a mammoth peice of engineering in its own right.  The gears in the earlier picture would have been used to pull the horse drawn boats into the lift along this section.

Now we're back on normal canals they seem so narrow but, with the help of able seaman Lucas, AmyJo could work her way along with no problems.
By now the weather had deteriorated and a drizzle had worsened into rain.  The crew retreated inside whilst Cap'n Hat took the helm.
Now now, I know what your thinking and its hat not pra.....


We decided to give the boys a little more adventure and pass through Barnton tunnel then wind and retrace our steps back to Anderton to drop off the crew so they could go home for tea.  Young Lucas loved every minute of the trip and gave Chris and I a big hug and thank you as he left.  He may only 4 but already is such a gentlemen.  We really enjoyed having Lucas and his family on board and as he loved it on AmyJo we have promised him another trip and a visit to "our" ice cream farm at Tattenhall.

We then carried on in the rain for a few miles then called it a day near Marbury Hall footbridge just outside Northwich. 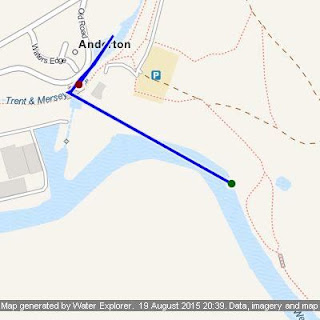 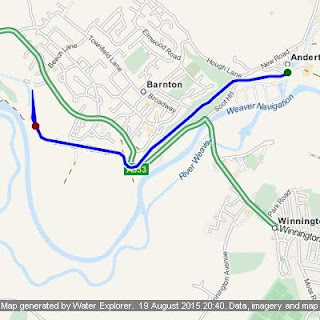 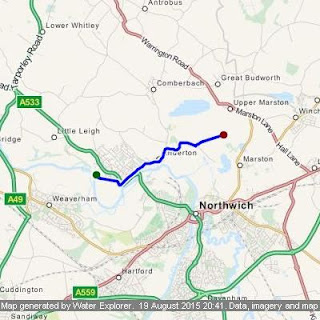