And back to Crick

Total distance:10.23 miles Elapsed time:3h53m13s Locks:0 Bridges:30
Average speed:2.63 mph (2.63 lock/mph)
This morning dawned dull and damp with the sky covered in light grey cloud.  The strong wind we had in the night had abated somewhat but there was still a brisk breeze to contend with.  We had a most peaceful night and we both slept better than we have done for a long time.  So well in fact it was 9:40 before we surfaced! Most unlike us, but then.... what's the hurry?
﻿ 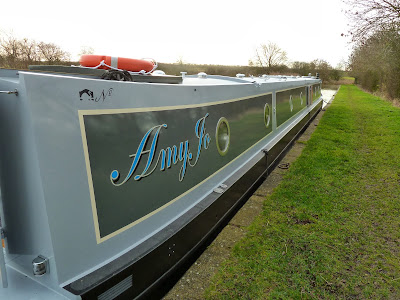 AmyJo was laying quietly in this lovely spot Crick side of Welford Junction and we had the whole place to ourselves.  It felt so good to photograph her as she was meant to be and I admit I did not want to leave, but we had to be back for work on Monday. 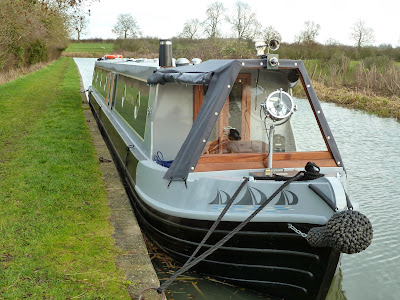 We made good time on the way back and passed four boats coming the other way in one hour at one point.  We had not see one on the way to Welford.

The weather started to close in as we made our way back towards Crick and a light drizzle followed but we did not mind one bit, nothing could have spoilt our day as far as we were concerned.

Four hours later the marina came into view and we discussed how we would attempt to moor up in the wind after yesterdays problems. 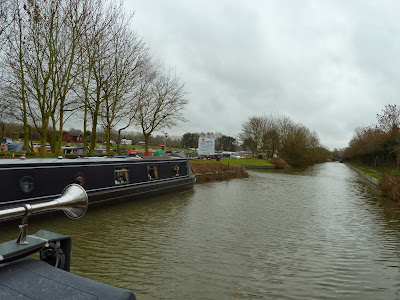 The plan was to turn AmyJo at a right angle to the mooring and edge her bow to the jetty.  Chris would jump off and hold the bow while the stern was blown downwind.  I would then motor Amyjo onto her berth.  Seemed a good plan at the time.

Nervously I turned AmyJo into the marina entrance with inches to spare.  On the front of the bracket supporting the horn is mounted a small CCTV camera that gives a good view ahead and of AmyJo's stem post.  This paid for itself at this moment as I could see just where AmyJo's bows were to the bankside.  From the photo it looks like we were going to hit but thanks to the camera I could swing AmyJo round at just the right point with a bit of reverse gear. 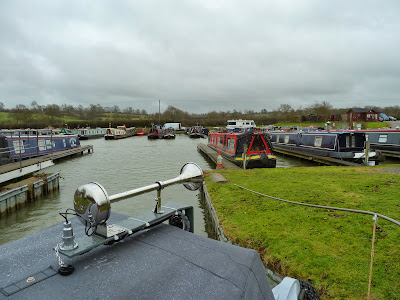 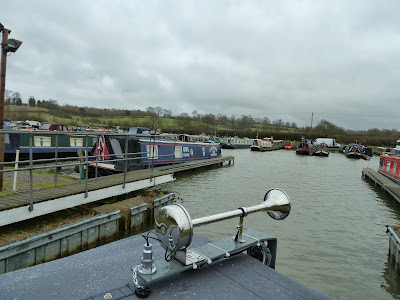 I got AmyJo lined up in the entrance and slowly entered the marina, turned AmyJo as planned and immediately felt the side wind catch her.  I managed to edge her nose towards our mooring as we planned and Chris stepped gently onto our jetty.  A bit of power and full rudder and with Chris holding the bows in with the mooring line and the wind pushing her stern round as well, AmyJo spun deftly round slipped perfectly onto her mooring.

Relief washed over us as we tied the lines and got settled and it was only then we realised how cold it was but having seen other boaters winter attire we were prepared.  Believe it or not I am wearing five layers under that lot. 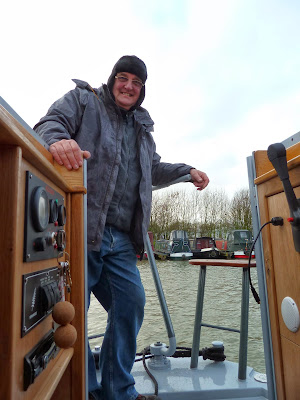 We then reluctantly packed up, closed up AmyJo and headed home.

The verdict of our first cruise?


ABSOLUTELY RUDDY MARVALOUS!
AmyJo handles really well and swims just beautifully.  She's a handful manoeuvring in wind as we have no girly button to help but we're getting to know how she handles in such conditions and are learning what works and what does not.  We are already in love with her and cannot wait now to next weekend when we'll be spending Christmas aboard for a week.
﻿

I know that feeling - fantastic! Your joy really comes across. Have a great Christmas on board - we're hoping to be on Jubilee for a few days in the Christmas hols too.

Hi Halfie
Thanks, it did feel pretty special at that.
Hope you have a lovely Christmas.

Your using your sailing experience letting the boat blow around, its all good fun though eh!