While going through my twitter feeds the other day I came across a tweet from Brian McGuigan who I follow.  Some of you may know Brian as the owner of  working boat Alton (click).  Brian works in all weathers all year round and provides an excellent service to boaters in the Cheshire area.  He is often found on the Trent and Mersey, the Shropshire, the Macclesfield canals and so on. 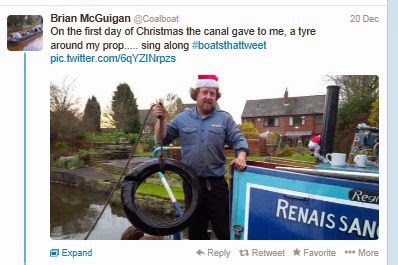 His tweet brought about several comical responses and writer Christina James who blogs at http://christinajamesblog.com/ came up with the perfect song

Twelve shammy leathers
Eleven yards of piping
Ten loopy long johns
Nine pairs of knickers
Eight perished condoms
Severn knots of netting
Six wads of sheep wool
Fiiiive plaaaastic bags!
Four bits of string,
Three old socks,
Two coils of wire
& a tyre wrapped around my prop.
Bet as you read it you started to sing it in tune to the well known version of the song, I know I did :-)  Thanks to Christina for allowing me to share her lyrics with you.
﻿
at 21:54:00