Lord Mayor of Chester and Admiral of the Dee

Hi folks,
We have not had much to post about of late and hence why nothing from us.  We have been busy though completely redecorating Amy's Bedroom and installing new wardrobes.  Have to say the room looks warm and cosy now.


I did have a bit of a surprise on Monday as I received a letter from the local council inviting me to attend the Lord Mayor of Chester's annual inspection of the river Dee here at Chester.


The position of Lord Mayor of Chester is unique in England as of the 21 Mayors in England, the Chester Mayor is the only one also bestowed the title of an Admiral.  Apparently this was one way for the King of England to increase income to the royal coffers as any duty and taxes of the river users would have to go to the Admiral and hence on the the royal Purse.  In its day the river Dee was second to the Thames as a busy port in its own right.


As Admiral of the Dee the Lord Mayor is duty bound to inspect the river from Chester for a 12 mile stretch.  To do this the Mayor enlists the use of one of the local pleasure boats, the aptly named "Lady Diana" for the stretch from Chester to Farndon 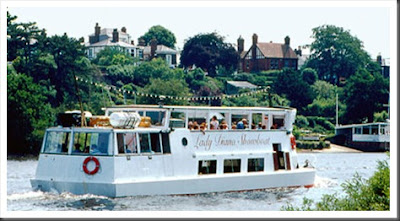 The Lady Diana with our sailing club in the background


During the cruise we can all share our concerns and issues about how the river affects the groups and these are noted.  There is a problem growing because the river all the way up to Llangollen has now been placed as an SSI (Site of Special interest) and as such is subject to rigorous protection as it is one of the few rivers on the west coast that is a spawning river for salmon, has rare species of Dragonfly and so on.  As a result Natural England want to keep humans at arms length from the river and allow it to evolve naturally to encourage the wild life.  Very commendable you say but they insist on this to a point where it is starting to effect access to the river by the public and groups like our sailing club.

You see they are insisting  on dense planting of trees along the river banks all along the river especially by the meadows at Chester to form breeding grounds for the fish and habitats for wildlife.  Some of these trees are now 40 feet high and are starting to destroy the banks with their roots and then fall into the river, floating down stream being a hazard to all using it landing at the salmon leap, a tourist attraction in Chester.


These trees also block out any wind making sailing difficult and also block the view of the river as people walk along the paths.  Now the river is 31 miles long and all we want is a 1000yard stretch kept clear so we can continue to sail in future.  Surely that will not have a massive impact on the wild life.  Neither the public nor the sailing club want all these trees so we are hard pressed to get Natural England to see sense and allow a program of pruning and Coppicing to make things better.  OK moan over and back on subject.

In the photo above you will notice the Mayor is holding a cushion with a silver object on it and this is that item. 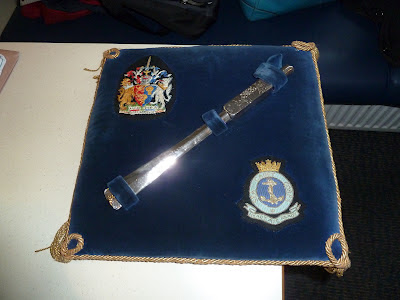 It is a solid silver model of an oar presented to the Admiral of the Dee in 16 something or other.  It is the official badge of the Admiral of the Dee and has to accompany him/her every time they are on the water.  The cushion is supposed to keep it afloat if it falls into the water though this has yet to be tested and for good reason.  The Crest on the left is the crest of Chester.  The three items in the between the lions being acorns.  Chester was renowned for its Oak trees which these represent but the trees were cut down to help build the King's fleet of ships to fight the Spanish. I wish they would cut the current ones down and build another fleet :-) The badge on the right is that of the sea scouts who traditionally escorted the oar when on the water.  Most Mayors sport a chain of office and/or a mace or sword but the Mayor of Chester is the only one to hold this type of regalia so it is of great national importance apparently.  If you are ever in Chester call into the civic centre and there you can get to see the oar and hear more of this interesting history.


Its pouring here and has done all day.  Our normally placid river  now has a 4 knot flow on it making sailing difficult and it looks positively miserable outside at the moment.  Has to be the wettest drought on record.


Any hoo thats all for now.  Hope everyone is well and not getting too wet.  Til next time.....