Didn't she do well

I am just back from our helmsman's course at Willow Wren in Rugby and have finally got time to give you all an update. I apologise if its a bit long winded.

I say I'm back and not we are back as on the way home from Fernwoods on Thursday we got a call to say Chris's mum, Mary, had had two falls in as many days and had been found  on the bathroom floor by her home help.  She had been there all night poor thing unable to get up.  Unfortunately she is exibiting signs of dementia and so is going to have an assessment to see what is to be done about it.When we finished the course chris headed South to her mums and I came home as I am at work on Monday.

So where to begin?

Our visit with Fernwoods went really well and now we have the hull plan finalised subject to Fernwoods CADing it up and our approval.  We worked through each room of the boat from Stem to stern and our layout seems to be OK.  As Julia put it we are squeezing a 70foot boat into 65feet so we need to wait to see if the measurements all add up.  Now if the CAD plans show we need another foot or two I have asked Fernwoods to cost up the extra length.  If its not too much AmyJo may grow 3 feet to 68feet.  But that depends on how much extra it will cost.  We do not have an endless budget and so we have to keep a firm reign on costs at this stage.  That said we are allowing one extravagance and that is the Josher bow.  Ferwoods have 4 boats in their workshops at the moment one of which has a Josher bow and one with a normal bow.  Well for me there is no contest, the Josher bow looks so much more refined and prettier so AmyJo will have one.  It will add to our budget but I don't think we'll be happy if we go with a normal bow somehow so Josher it is.

I promised some layout plans previously and here they are, we actually have two.  The difference being the front saloon but I am not going to reveal which one we'll have for now as that will depend on how the layout pans out on Fernwoods CAD system (if it all fits in).

The pictures are not very good at this scale but if you click on them they should enlarge.  As you can see there is nothing innovative about the design.  Its an amalgam of layouts we like that we have seen in other boats.

The really good news is that AmyJo's base plate will be laid in the next few weeks and we hope to be there when that happens so watch this space.  After waiting for so long this news is a god send to us.  The excitement is mounting and we will not rest until we see that plate go down and the first weld made.

As I mentioned before Chris and I have been on our Helmsman's course today.  We both thoroughly enjoyed it and we both learned a lot.  At least we never hit anything and our instructor still has some hair.

Our boat, Peggy, is on an arm of the North Oxford Canal near Newbold.  This arm was the original course of the canal when it was first built but the canal was altered to cut out a 2 mile loop and the arm is all that is left of the original route.  Peggy has a part in history as it is the very last shell to be made by Dave Thomas at Braunston before he retired in 2011 after a very long time in the business.  rose narrowboats did all the mechanics, fitting out and painting.

We headed out of the very narrow arm with Paul who joined us on the course on the helm. 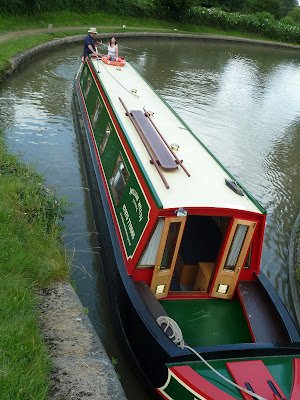 All three of us had to take turns doing various manoeuvre's such as mooring up bow first the stern first.  Then we each had to steer into a lock and go up it.


Chris did an excellent job and never once dumped into anything


Next we had to wind the boat, each having a go at convenient points along the cut.

Having travelled up three locks and winded we then had to do it over again going down.   At each lock we took it in turns to moor up and get under way without pushing the boat out by hand into the channel but using the tiller and throttle alone.  Its amazing how quick the bow comes out with a good burst of reverse once the stern is out in mid channel.


As we all did so well we were then given the opportunity to steer the boat going astern and found you can actually steer the boat in reverse though its not easy.

Chris then helmed the boat back into the arm and finally winded the boat and reversed onto Peggy's mooring.  You can just see the winding hole on the left ahead of Peggy.  Chris's task was made all the more difficult as there was a hire boat moored opposite the turning point. But she did a great job and was so pleased to reverse onto the mooring all by herself without any prompting from Steve.  Considering Chris has only ever helmed a boat on an open, straight, stretch of the Leeds Liverpool canal so manoeuvring in such a tight spot must have been nerve wracking for her but she cruised past the moored boats, winded and then reversed onto the mooring like an expert.

Didn't she do well!


We had a fantastic day and we both took a lot away from it.  At least I found manoeuvring the boat much easier by the days end and I have to say I'm so proud of Chris.  She was so nervous at first bless her but by the end of the day she was helming Peggy like she had been there all her life.  After the course round up we both left and parted our ways with Chris off to her mums.  If you ever read this Steve, thank you so much for a great day.

Latest news is Mum is OK and is looking much more chipper today.  Its still early doors yet but we live in hope.

Well I'm now really tired so I'm going to finish my scotch and head for the sack.

Until next time TTFN....