I woke at 3am this morning needing to use the little room after which, for reasons unknown, I could not get back to sleep.  I stuck it out under the duvet until 6am and could lay no more so got up leaving Chris having a short course of death.  The cabin was particularly cold and there was an air of winter outside so I woke the hobbit once more to warm the place up

Wrenbury always holds as special place for us as it was here we met up with Del and Al on Derwent6 (click).  It was this meeting on this exact spot we had set in motion our journey to having AmyJo built.  On that day we enjoyed full sun and warm weather.   You can read the full story of that day here (click).

We loosed lines at 9.15am and with no one in sight I got AmyJo under way while Chris prepared the lift bridge for me to pass under.


As I passed under the bridge I looked back and was astounded to see three more boats following me through that had appeared from nowhere.  I had to pull over to wait for Chris whilst the boats passed through. Not one of them thanked Chris as they passed, how rude!

Behind them, some distance back, was yet another boat had appeared heading our way so Chris was not sure whether to keep the bridge open or not.  Her dilemma was soon resolved when the hire boat basin owner told Chris to lower the bridge as complaints from residents meant only three boats were allowed through at a time to avoid queues of traffic.  Chris complied but by now the 4th boat, a single hander with no BW key, was at the bridge and asked Chris to let her through, which Chris duly obliged.  At least the lady helm of this boat thanked Chris as she gratefully passed under the bridge.


The four boats then disappeared into the distance leaving us astounded and of course, left with every lock there after against us.  Moral of the story - let some one else go first next time!


I decided at a blind bridge 'ole to try the horn and once again not but got not so much as a squeak from the damned thing despite it working fine last night.  This is quite odd as it worked fine before I re-mounted it

We worked our way up Warbury Lock, Quoisley Lock, Willeymoor Lock and Poveys' Lock, all against us until we reached Grindley Brook Locks.


The Grindley bottom lock is reached via a bridge with unusual diagonal brickwork, presumably used as the bridge is offset at an angle to the canal.

The start of Grindley Brook locks begin with three separated locks followed towards the summit by the famous 3 lock staircase rising just under the A41 with its lock side @69 cafe.  We have passed these locks countless times by car before now so it was a particular delight for us to work them in AmyJo.

At the top of the locks is a sanitary station and 3 water points.  We needed to top the water tank up and dispose of rubbish so stopped for a while and had a late lunch at the same time whilst it was quiet.
Whilst moored up I thought I'd try the horn again.  I figured if it worked unmounted I'd try it that way for the rest of the trip.  I loosened the two holding screws but before completely removing them tried it one more time and b@gg@r me it worked!  Whats more it has done so every time I've used it ever since.  Why loosening a mounting screw should make it work I've no idea but who am I to complain.

A few more miles on and we arrived at the New Mills lift bridge by the junction of the Whitchurch arm.  I was keen to investigate the arm and hoped to moor there over night as it looked quite pretty.  The sign at the arm entrance tells boaters of larger boats to continue to the nearby winding hole to wind and then return to enter the arm.  Clearly at a steep angle to the main line there is no room to turn into the arm when travelling from Grindley Brook so we abided by the sign, winded and entered the arm.

At 4.30pm it was clear we had arrived far too late as all available moorings were taken which came as no surprise. I had hought is a long shot at best.  With no choice we winded in the arm and left having at least had the experience of travelling into it.  All signs indicate this stretch is only phase one of the restoration so it may well be extended one day.

Winding once more upstream of the arm in the same winding hole as before we retraced our steps and moored downstream a few 100 meters of the lift bridge for the night in a lovely secluded spot.  We were now ready to start our homeward journey and the rest of the Llangollen will have to wait for another time. 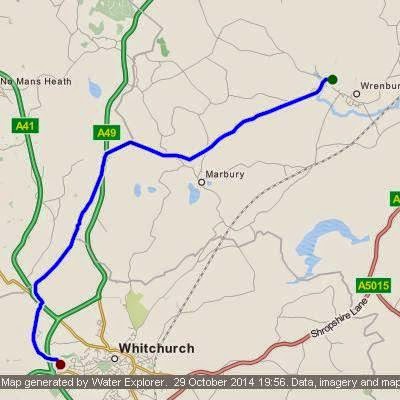 Hi
We plan to be moored at Wharton lock over the weekend ,hope we will be able to meet you
Richard & Sharon ( nb Oakapple )

Hi to you both, great to see you blogging again. Steve, check that there isn't a voltage reading between the body of the horn and the shell of the boat with the horn completely unscrewed from it. If there is then you've found the problem. Best to electrically isolate it from the shell in case the body of the horn is connected to one of its terminals.
Best Regards
George