We woke this morning to glorious sunshine and summer trying to make a come back as it felt comfortably warm.

We had a lovely run for the 20 minutes it took to reach Hurlston Junction and as we planned to cruise new waters for AmyJo we turn onto the Llangollen. 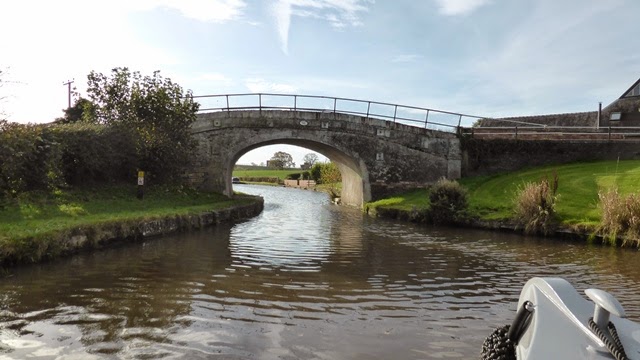 It transpired the boat inside on the lock landing had its rudder out of the skeg cup and those rafted to it were travelling with them.  They had come from Wrenbury last night and travelled down the flight in the dark then moored there.  The chappy on the stern was the hire boat mechanic trying to relocate the rudder without success.

There was nothing for it but to raft alongside the outer boat to let Chris off to set the lock.  In so doing we woke the crew who were shocked we had come along side.  I politely reminded them where they had moored and they saw our predicament, then went back to bed would you believe.  It was now 10:30am!

Having spent the last few months working wide locks the chambers at Hurlston felt really enclosing and tight.  That said both Chris and I both feel happier in narrow locks.

For the rest of the flight I got Chris to take the helm and did my bit, keeping the locals happy.  This lady lives in the cottage and took great delight telling me they had been out gathering sh*t for their compost heap.  Apparently they have two of them.  Nice! 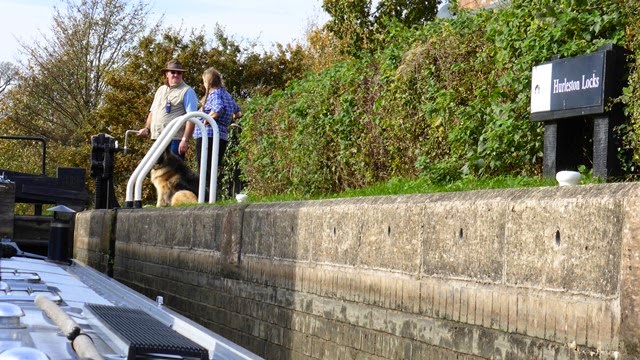 Half way up the flight I met the hire boat mechanic on his way back to his van and got chatting as we walked to the next lock.

Seems the hirer of the boat with the busted rudder was insisting the boat left base like it and that it was not his fault.  Neither the mechanic nor I were convinced as he had already dropped down 4 locks before arriving here so why had he not reported it sooner.  To make matter worse for the hirer the local lockie, who by now had joined us, told us that last night a boat had rammed lock No2's top gate in the dark as they thought it was open and so the walk board was now unsafe.  I do wander if it was our hire boat below?

At Bachehouse bridge, I think it was, C&RT men were repairing yet another bridge parapet.  This seems to be more common concurrence from reading other blogs it seems.

One for our friend Steve (Sven),  as we rounded a bend we found a garden with a smorgasbord of classic cars but one I know Steve would appreciate is this mini hidden away between sheds.  Looks a runner too. 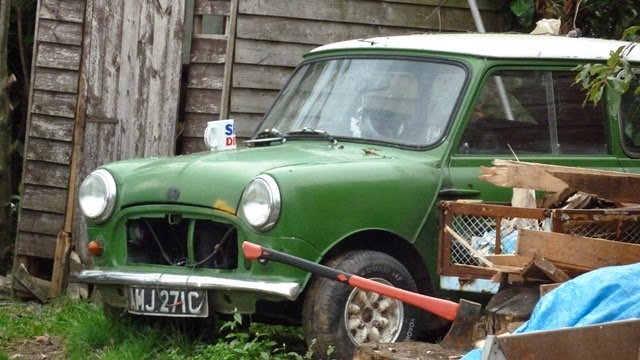 Though, in the same garden, this hardly fits the classic car category, however, stick 4 wheels on, add an engine in it and you could have some fun down the high street I think.  "There they go Milrid, swanning of to the pub no doubt"


After ascending Swanley and Baddiley locks we approached Wrenbury and our first ever lift bridge.  Poor Chris was so keen to have a go she forgot the BW key and windlass so had to scurry back to AmyJo for them. 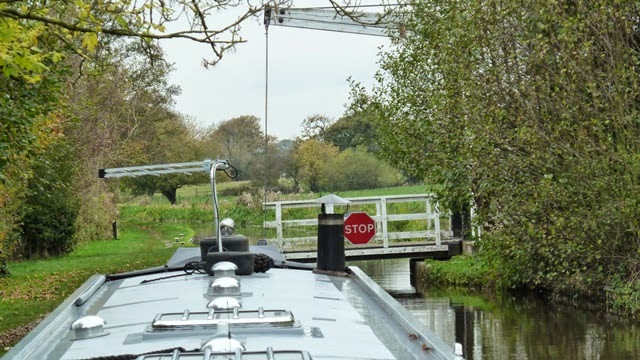 We knew rain was due later so decided to make the most of the almost empty visitors moorings and pulled up for the night.  I had barely closed up the boat when the rain started.  Good timing or what!  It was heavy at first but soon abated long enough for me to dismount the horn before it got dark.  I was determined to see if I could get the blasted thing to work before forking out for another.

I took the horn to pieces but could not find anything obvious, there was no corrosion or loose joints, so put it back together.  I decided to give it one more chance so tried it and blow me it worked.  I had not expected it to so nearly dropped it over the side as it made me jump.  I tried it again and behold, it worked again.   Pleased with myself I remounted it and we then went for a meal in the Dusty Miller to celebrate.  The meal was just fab and although slightly on the expensive side it was worth every penny.   We then retired for a drop of highland spring water before hitting the sack. 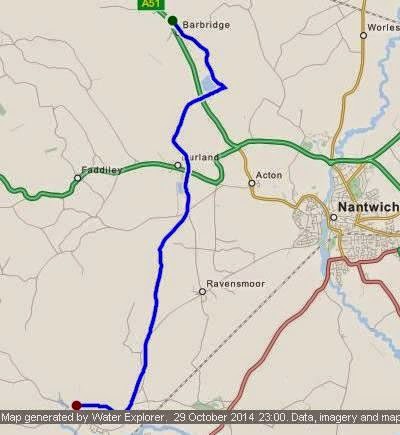 Your trip along the Llangollen is going to bring back memories for us as we joined NB Gypsyrover at Wrenbury and Dot & Derek took us all the way to the end at Horse Shoe Falls. We will follow tour trip with great interest and nostalgia.

Keep up the informative blog.

Hi Jenny and Robin
Sadly we only have 7 days so cannot make Llangollen itself but we do intend to return next year and do the whole length, plus the Montgomery if we can too.