Back to Black and Shades of Grey

Whilst on our last cruise I lent over as AmyJo entered one of the Fosse locks to check her position as she entered and our small rubber duck aerial for the car radio in the back cabin dropped off and fell into the lock and sank. On our return I taped up the hole that was left until our return so as to keep any rain out.

This weekend we decided not to cruise but instead do one or two jobs that needed sorting as the forecast was favourable. First order was to replace the aerial with a new marine grade AM/FM one that I hope is a bit more robust.  In order to remove the old aerial cable I had to completely dismantle the engine instrument panel to gain access to the inside of the mounting hole.  The new aerial required a slightly larger hole so I had to enlarge it to fit the new base.  My 8 in 1 power tool set just earned its keep.

Having just finished putting everything back in place Sam Matt from Foxton Services arrived, as arranged, to give the engine it's 50 hour service. I can recommend Sam, he did a good job and was full of really useful advise.  One piece I really liked was to roll up a newspaper and stand it on end in the bilges.  It will soak up any water like a sponge.

Next on the list was the big one, tidy up the battle scars on AmyJo's bow flares and gunwales and rubbing bands where she had rubbed along the lock walls over our last few cruises.

The gunwales were showing signs of wear and tear from the constant rubbing of the fenders and from when coming alongside I did not get it quite right now and again.  The bow flares were scratched on both sides and were starting to show signs of rust so something had to be done.  Besides with Crick show coming up in a few weeks we wanted AmyJo to look her best in case we had visitors.


First order on Saturday was to sand the scratches all down the Starboard side nearest the pontoon with a detail sander then prime them.  Fortunately the gentle wind was blowing across the marina and with slackened lines it held AmyJo off the pontoon enabling us to remove the fenders whilst we painted on the primer.  Poor AmyJo was now beginning to look a little like a battleship in camouflage down her Starboard flanks.


Sunday, with the weather fine and settled, we tackled the part I was really dreading as having read accounts by Tom on Waiouru and others I knew this would be no easy task to get a good result.  So after adding a little Owatrol oil to the Epithanes Multiforte, Chris and I both set too painting the gunwales, myself with a roller and Chris with a brush cutting in where the roller could not reach.

I have to say it was easier than we thought and the result is not bad even if I do say so myself. We were done by lunch time so then the bow flares got our attention.  The Port side gunwales are nowhere near as bad for some reason so they will wait until next time we're aboard.

AmyJo's paintwork was sprayed on in the workshop and the finish is almost mirror perfect.  Getting the same result with brush and/or roller would be real challenge but we needed to try as the scratches could be left no longer.  By tea time the undercoat was on and drying nicely.  Glossing would have to wait until Monday as it would soon start to get damp.

And the end result, almost as good as new but not quite a smooth as the sprayed finish but as they say, a blind man would love to see it 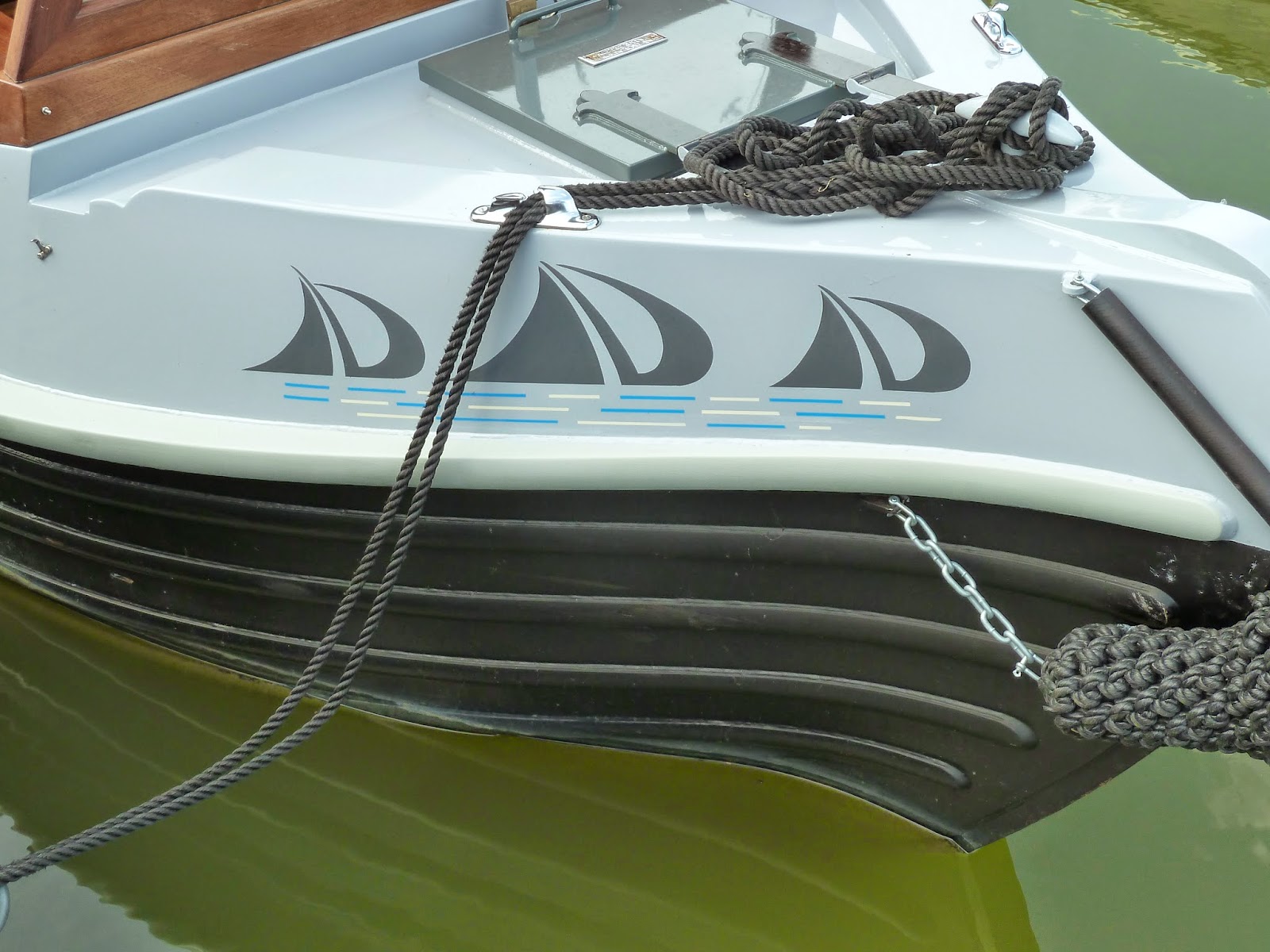 Andy Munro has promised us some pots of the same paint to use as touch up but in the meantime I managed to get some Craftmaster paint mixed to the same RAL codes.  There is a very slight difference in shade but its barely discernible.  I'll give it a second coat with the touch up paint when we get it from Andy.