After having had an awful week with my cough that is finally subsiding by chance I have been given the oppotunity to do something I have always wanted to do this weekend!

I have always wanted to travel on an old traditional work boat on the canal and thanks the the Chester Heritage trust my dream is going to come true.  I am to help move wooden hulled NB Towy (CLICK) for more information  from Chester Basin to Ellesmere Port Narrowboat museum this weekend.  My grateful thanks to Stewart Shuttleworth for organising this for me The narrow boat Towy was built by Fellows, Morton & Clayton Ltd at Uxbridge in 1938, one of a batch of eight new motor boats designed to work between Stanlow Oil Refinery on the Manchester Ship Canal and the Midlands. Like her sisters, the Towy was named after British rivers, the 'T' names signifying craft built or acquired in that year; other 1938 craft included Tweed, Tay and Tees, while the 1937 boats included the 'S' craft Stour and Spey). The batch was completed in 1939 with the two 'U' boats Usk and Umea.  I have had the good fortune to stand on the deck of Stour myself.


The Towy was an 'oil boat' for many years, carrying loads of up to 19 tons of fuel oil from Stanlow refinery (actually thats where I currently work) to Langley Green, and taking about three days for the 80 mile trip. It was the custom for Claytons boats to work in pairs, and the Towy usually worked with the 1930 butty Kubina. These two boats were home for the Berridge family - Mr & Mrs Leslie Berridge and their six children. The long-distance oil traffic ended in 1955, and Towy thereafter became a 'day boat', taking loads of tar from Birmingham area gasworks to the works of Midland Tar Distillers at Oldbury

Claytons withdrew from canal operations in 1966. It has often been said that the introduction of North Sea Gas finally killed the gas works traffic but the chronology of natural gas discovery and utilisation does not entirely support this theory - in fact, the change from coal to oil fuel in many local gas works, together with the building of the M5 Motorway through Claytons' depot at Oldbury were far more important factors. 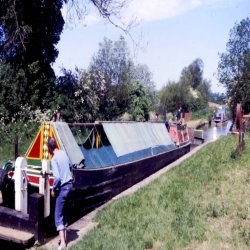 Now almost fully restored Towy is often used as an educational tool for school children to learn about life on the waterways and working narrowboats.  She travels the Cheshire canals stopping on her way to provide a hands on classroom for many youngsters to get a feel for how it was.  A fitting end for a lovely old gal and I am really excited to be getting my chance to move her on a stretch of canal I have yet to travel on.  It truely is humbling to be allowed to handle a rare peice of history from the very place where I work.  I can't wait!
Watch out for my next post with, hopefully, plenty of photos.
at 14:50:00