On Wednesday we found that it was market day in Market Drayton.  We had planned on staying the day so walked into town.  It was getting warm and the sun was out.  Just like a summer's day.  We enjoyed walking through the numerous stalls.  Both Marie and Chris managed to buy some summer dresses as well.


Having walked about all morning we arrived at the Hippodrome, now a Weatherspoons.  With the warmth of the day we stopped for a drink.  Becks is 3 for £5 so I took up the offer.

On the way back to the boats Steve and I needed the boys room so dived into a pub, however, the canny landlord called out "what'll ya have guys" so we felt obliged to have another drink, but after the needed comfort brake.  To be fair our beers (Doombar) were waiting for us on our exit and nice they were too!

We returned to the boats in the early evening and after freshening up we set up the barby and had a pleasant evening sat outside chatting the night away.  The evening was pleasant but the temperature soon dropped.  No matter we just wrapped up warm and carried on.

We rose earlier next morning as we wanted diesel and water at the services.  It was slightly misty as we crept past the lone of moored boats, then winded at Talbot wharf, backing up onto the fuelling jetty just in time for it to open.


Having filled with diesel it was time for watering.  There was a bit of a queue building by now but a space just big enough for AmyJo was left between the two boats filling at the taps (there are two water points here).  I worked AmyJo over and settled in between them when a fourth boat owner called over "Oi we want water too my friend".  Now I knew the boat on the tap behind us was nearly full as they told us as we moored up so I politely replied "and so with a bit of patience you will get some before me".  In fact they did get to fill before us as the boat behind us soon moved off so we did so we did not jump the queue when the boat infront later moved off.

Later, just as the shouting boater left the water point Steve and Steph came through the bridge 'ole in nb Merlin.  They had to stop in the bridge 'ole as Mr impatient was now blocking their way, however he seemed not to realise this and proceeded to yell and guffaw at them to come through and get out of the way.   It wasn't until I pointed out to him in fact it was he that was in the way he shut up and moved over allowing Merlin to proceed.  Really! some people have no idea that they are in the wrong at times.  We just stood and watched the antics as he left.

After the fleet had all winded we set off on our return leg via the Adderley locks, at the top of which Graham and I managed to buy another of those lovely pork pies.

Next, we started our descent of the Audlem locks, this time making good progress.  The group now worked as a team and the routine we adopted meant we all managed to help each other though assisted by the crews of ascending boats. 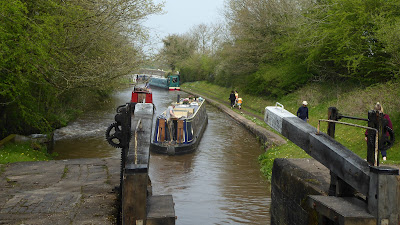 Having descended Lock 13 we found plenty of mooring space on the visitor moorings in the pound.  As we had a table booked for another meal in the Lord Combermere we stopped and moored up for the night.  I have to say we all particularly like the food in the Lord Combermere,  its worth the walk to the pub just for that. 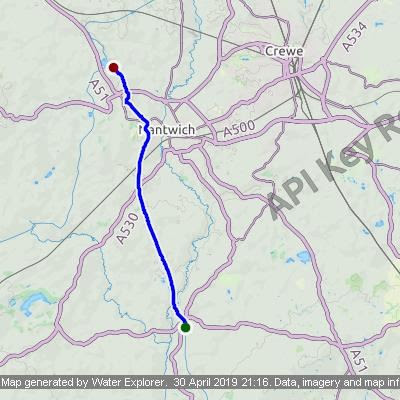