A busy few Weeks and Then a Break Away Part 1


Not blogged for a few weeks as we have been based at the Shady Oak busy getting the pub ready to open.  I have a lot to post about as we have just returned from a week trip to Market Drayton and back.  I'll not write one mile long post so will split the trip up in a few post over the coming days.  Watch this space.


I have been mostly working in the beer garden cutting grass and weeding flower beds.  I also swept the car park and generally tidied up.

I had to move another boat for the broker at Tattenhall Marina during the work at the pub.  This time it was the blue Collingwood boat I'd picked up from Aqueduct marina last year.  Steve, the broker, has now moved his operation to Nantwich so I will be moving his boats to there and Uplands basin at Anderton over the coming weeks.  This meant I got my first trip along the Middlewich branch and over the newly restored breach.  I must say they have made a great job of reinstating the canal and towpath.

I'm please to say the opening of the Shady Oak on the 10th April went really well on Wednesday and the grand opening on Friday night was a huge success.  Boaters from the nearby Tattenhall Marina and Golden Nook moorings came in their boats in large numbers so that every available mooring space was taken for a half mile in each direction.  More boats were moored there than I have ever seen before. The evening entertainer, called Charlie, had many up dancing most of the night.  There must have been a few heavy heads next morning.  They have had a very busy Easter weekend so all is going well for them.


On the Sunday we began our planned trip to Market Drayton.  This trip our friends Marie and Graham came with us and this time Steve and Steph on nb Merlin came along too.

We left at about 10ish with a strong icy wind blowing but the sun shining.  It was interesting getting the boats into the locks in the wind but we managed without bumping the walls to heavily.  Today Steve was single handing so we had four boats with only Chris and I as a couple.  We all worked together to get the boats through the locks but this was slow going.


As the day progressed the sun was lost behind building cloud and it started to feel much colder, an extra layer needed.  At Bunbury staircase the locks were deserted, no volunteer lockies nor gongoozlers.  We paired the boats up in the locks and worked them through


The weather continued to deteriorate and the wind continued to pick up.  This did not deter any of us and in fact we all were quite enjoying the trip despite the cold.  It is alway good when we get to do our first real trip of the season.


The run from Calverley saw us crabbing along towards Barbridge, the wind quite gusty by now, but at least the sun started to make an appearance again, it still did not warm up any.

We passed through Calverley and then Hurlston Junction and continued on to Nantwich  where we managed to find moorings for the night at the Aqueduct.  After a long cold day we decided to eat aboard our own boats and a much needed early night. 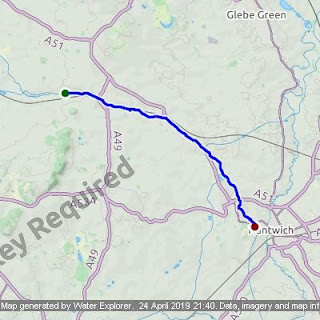 Next day we left at 10am.  The weather was better with morning sunshine but the cold of the day before remained.   Smudge, bless him, braved the cold again with Chris while she worked the two Hack Green locks as thats where he prefers to be, he hates being on the boat in a lock.  His new coat giving him some protection from the cold.

The morning started to improve and the sun continued to shine.  The wind was abating, though still keen, made easier passage. 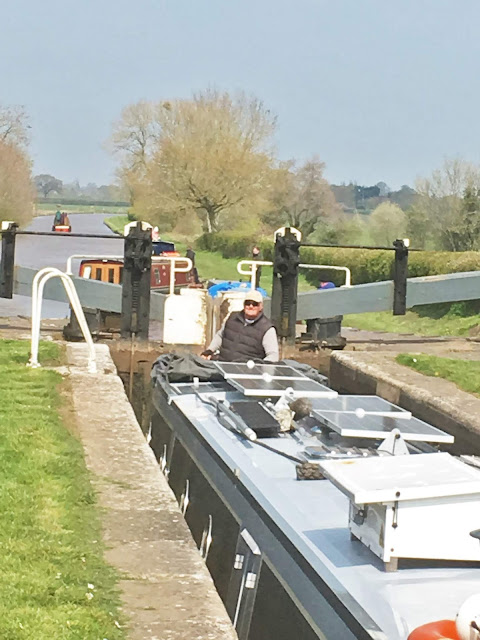 By the time it was my turn Steve and Graham had moored up and came back to help me through.  Their winter togs show just how cold it was despite looking nice and sunny in the photo. 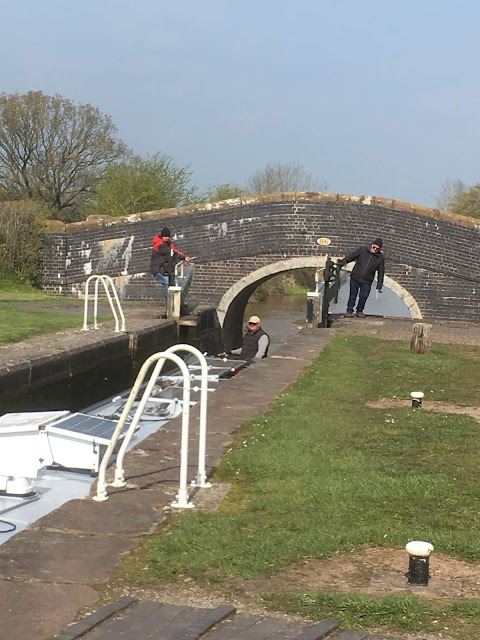 Once clear of the locks we proceeded on to Audlem.  By now Smudge had had enough of the cold and settled on his bed on the warmth of the engine cover.  He is getting on for 3 years old now and is finally calming down.  He is much more laid back while we cruise these days but demands a cuddle once we're moored up, not that I complain.  We've always had a daily cuddle ever since he was a pup.


That evening we moored on the visitors moorings below the Audlem Locks and had a super meal in the Lord Combermere Pub.  At last the wind was gone and it started to feel warmer for a change

I think I've bored you enough for now but will continue the trip diary in the next post. 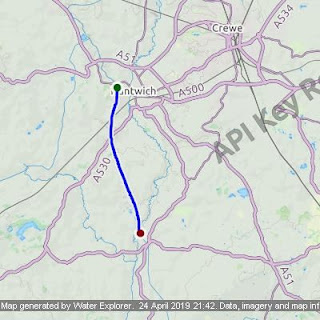