Easter and the Llangollen Day - 12 &13 Calm before the storm

Yesterday and today have been poles apart.  Yesterday warm and balmy then today blustery and wet.


We left Blake Mere in beautifully clear Blue skies and little wind.  It was still a tad chilly so full warm kit was required.  We've never known the cut so quiet with very few boats on the move.  We only had one other hire boat going our way and he was content to glide along on tick over oblivious of us behind him.  Eventually he let us pass 2 miles later.
At Prees junction we swung into the Whixall arm.


We cruised the length to the marina alone and passed through the two wooden lift bridges.  Chris found the first one hard going so I did the second one though this one was easier going.


on arrival found the office closed.  We docked on one of the floating pontoons but it was way too short for us so we backed off and moored just outside the marina.

The late afternoon was quite pleasant so we took a walk alone the  un navigable stretch of the arm now a nature reserve a mile long.  There were two pairs of swans on this stretch with both females sitting on nests.  One of the males swam alongside us displaying but keeping a respectful distance.  We quietly passed the nests and were left alone.

After a while the cut dried out and its hard to tell how much further it carried on.  The footpath here was overgrown with brambles so we turned back.


In the evening a Chas Harden boat pulled in behind.  Her crew worried because another hire boat had slammed into them and since then the boat had been taking on water.  The skipper wanted to be near marina services should anything go badly wrong.  We offered any assistance we could should he need it but as it happened he had an uneventful night with the leak easing right off.

As the sun set we were treated to a super sunset.  The quietness was deafening as night fell and we enjoyed a good nights sleep. 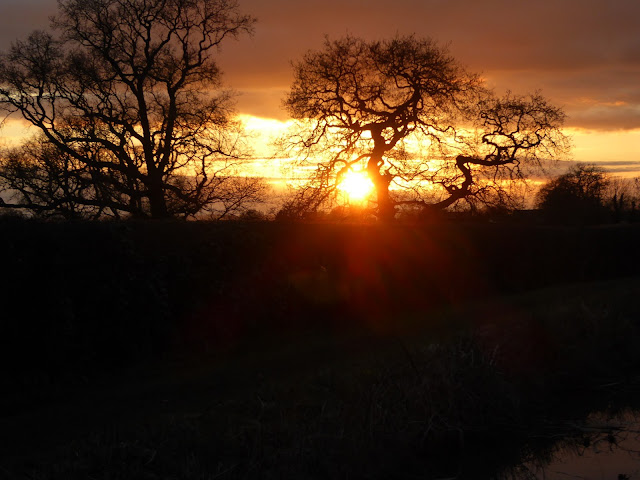 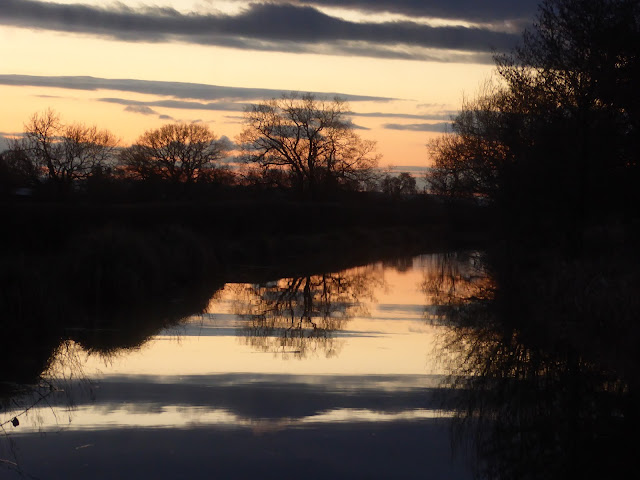 The Storm
Today has been really busy so no pictures I'm afraid.

After a peaceful night we got up to another sunny morning but with a little breeze filling in.  The Chas Harden boat had left and we got under way at 9am.

By the time we reached Prees junction the rain rattled down and it had blown up a hoooley.  Boats we having a tough time going including us. Fortunately the wind blew across our bows helping us with the turn onto the main line.   We got into a convoy of four boats with us in 3rd place.  The boat behind closed the lift bridge and fell way behind.  The rest of us battled on.

By 11am the wind was starting wreak havoc.  Later we came across one hire boat well and truly aground.  We stopped to assist but despite all the grunt of AmyJo's engine and theirs the boat would not come unstuck.  Eventually after a lot of to-ing and fro-ing they got free and we let them go ahead.

Further along we joined the queue again at the next lift bridge just as a boat was going under.  The next boat really struggled to hold point as the lead boat took so long to pass the bridge.  We got Chris ashore and she held AmyJo's bow into the bank with the bow rope so we did not do the same.

The poor hire boat ahead of us just started to go for the bridge when the lead boat crew shut it feet from their bows despite all our shouts to leave it open.  The stupid woman winding the bridge ignored us, lowered the bridge, and then just walked off without even acknowledging any of us were there, how rude!  By now the hire boat in front was blown across the cut and had run aground.  Despite their best efforts they kept being blow back onto the bank.

Chris ran after the woman but she was on her boat and off so Chris opened the bridge for us all.  I manage to get a line on the bow of the hire boat and together we got them free and through the bridge much to the relief of the crew.

By the time we reached the Whitchurch arm the queues of boats was getting ridiculous so we decided Thunderbird AmyJo needed a break,  We we pulled into the arm picking a mooring just inside.   To be frank, Chris and I were getting a bit tired both physically and mentally after sorting out hire boats though now I do feel a bit mean for saying so.  Its not their fault we were in their position once but that woman at the bridge really got my back up with her blatant disregard for anyone else.

After a walk into town and an excellent lunch in the Old Town Hall Vaults pub we returned to AmyJo for a well earned snooze.  With the weather still very squrly we've decided to stay put for the rest of the day.  We still have a bit of time so we have no need to be out in the weather just yet.